I've been on twitter for about eight years. I have a little over 1,000 followers. I'm not a big time social media star. I tweet about the wide array of things that appeal to me or catch my eye.

A few people respond to me regularly, and I reply back to them.

Only three times in eight years have my tweets been circulated to the masses.

The first was a picture of me in an R2D2 costume from 1982. I tweeted that to @StarWars and they retweeted it to the rest of the galaxy.

The second time my tweet was heavily circulated was when I posted a Chuck D song about Muhammad Ali after Muhammad Ali died. Chuck D retweeted that to all the Public Enemy fans worldwide.

So it usually takes someone popular to push my tweets to the masses. 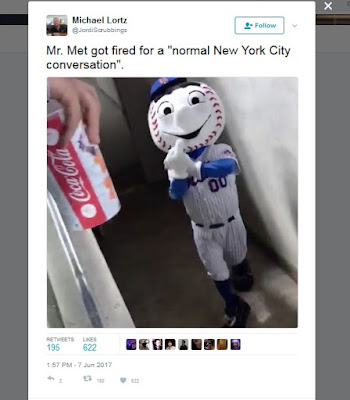 As you can see, a lot of people interacted with this post. I was shocked. Granted, it's not millions or thousands and I am not asking for free nuggets, but nearly 200 retweets and over 600 likes for a joke isn't bad.

My theory is that the tweet jumped in popularity when Twitter posted it on their top tweets for the topic. If you went to the twitter home page, there was a headline of "New York City conversation". Clicking the headline brought you to dozens and dozens of tweets about the subject. As mine was pretty popular, it rose to the top, which then made it more popular. Twitter is weird like that.

So that's my most popular tweet to date. Mr. Met engaging in a normal New York City conversation.
Posted by Jordi at 4:06 AM No comments: