Missing out on the Macho Man 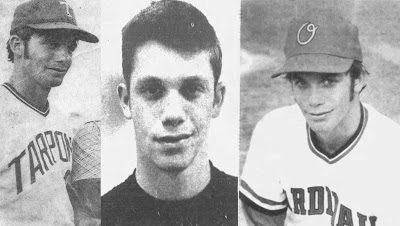 Nearly a year to the day before he died, I discussed with Bus Leagues Baseball the idea that I should interview Randy Poffo about his brief minor league career.

(Here is an absolute must-read article by Jeff Pearlman on Randy Poffo's love for baseball and his minor league career.)

After agreeing that an interview with Randy Poffo would be a great story, I surfed the web for any contact info for the Macho Man. A visit to a few web sites informed me that he had recently tied the knot, but I failed to find an email or any representative contact information. So I shelved the idea and wrote the name "Macho Man" Randy Savage on my potential interview list.

The problem with putting ideas on the back burner is sometimes they burn away.

Having grown up when pro wrestling was blowing up in a national sense, I was always a big Macho Man fan, as were millions and millions of kids my age. His stories and situations were always among the best and you knew no matter who he fought, he was going to put on a hell of a match. I got into wrestling as he was feuding with George “The Animal” Steele and followed him throughout his WWF/WWE career.

Although he wrestled in various other promotions throughout the late 90s and into the 2000s, I never saw another Macho Man match after he left the WWF. I know better now, but in those days I used to think anything outside of WWF/WWE was an inferior product, with less capable wrestlers. I thought WWF/WWE was “the big leagues” and would never consider “the minors” as equal entertainment.

Those who know me well know my interest in lower level baseball is almost matched by my interest in lower level professional wrestling. For that I have to thank my brother, professional wrestler Bryan Maddox. For over six years, he has wrestled throughout the State of Florida, working in the ring or behind the scenes with such legendary names as Haku, Afa the Wild Samoan, Jimmy Hart, and Scott Hall (aka Razor Ramon). Ironically, he was also once on the same card as Randy Poffo’s brother, “The Genius” Lanny Poffo. My brother’s wrestling career has taught me that like the bus leagues, it takes years of dedication, hard work, and several lucky breaks to make it in professional wrestling.

There were several times I talked to my brother about my idea to interview the Macho Man. Every time I mentioned it, he concurred that it would make a great story and that I was the right person to do it. Unfortunately, I never attempted to use his contacts to track down the Macho Man.

In January of this year, as we planned the Bus Leagues agenda, I reiterated to Brian and Eric how this would be the year I would interview Randy Savage. “My goal this year is to interview Macho Man Randy Savage on his minor league career. I don't care who I have to elbow drop,” I wrote in an email to them.

“I'll say now what I said when you first mentioned it: that would be completely awesome,” Brian wrote back.

“That would need to be on the site. We could not hold that for a book. Everyone would link to an interview with Randy Poffo. We would win the internet for the day,” I replied.

Two weeks ago, and only 10 days before he died, I again wrote to Eric and Brian that I was going to pursue the Macho Man interview. I now work in Sarasota and it would be convenient for me to drive from work one evening and talk to the legendary former grappler. All I had to do was find the right contact and line it up.

Once again, however, my effort to find a contact was minimal. I did another cursory glance at a few web sites, but didn’t consult the Rolodex or push the issue at all.

Sadly, the world mourned the passing of “Macho Man” Randy Savage on May 20th. Sports Illustrated published pictures of Savage in his minor league uniform, ESPN interviewed Larry Herndon of the Lakeland Flying Tigers on his time playing alongside Savage, and even Deadspin.com discussed Savage’s minor league exploits.

After learning of the car accident that took his life, I logged on to twitter to express my sadness with millions of other people, from casual fans to full-blown “Macho Maniacs”. Among my tweets about Savage was a casual mention that he was one of my “dream interview subjects”.

Shortly after that tweet, I received a reply from a local Tampa Bay Bucs blogger. He told me that he not only lived by the Macho Man, but even had his cell phone number. He told me that although Savage was quiet in regards to wrestling, he loved talking baseball. He even mentioned that Macho Man talked often about his time playing with Andy Van Slyke, Keith Hernandez, and Vince Coleman.

I missed out on a golden opportunity. All I had to do was ask every journalistic contact I had, “Looking to interview Macho Man about baseball, anyone have a contact?” and I am sure the Bucs blogger would have come through. Or he would have at least tried to make it happen.

But I never contacted anyone. I never made an effort outside of talking about it.

(As I write this I can imagine the Macho Man saying, “Talk is cheap, yeah. Actions speak louder than words. And words written are words read. Dig it?”)

Needless to say, I learned a very valuable lesson. Never put a great idea on the back burner. I thought I had all the time in the world, but as a friend of mine likes to say, “Time is the most precious commodity”.

You never know when it will run out.

Tonight I found my potential interview list and sadly struck a line through the name “Macho Man” Randy Savage.
Posted by Jordi at 5:20 AM No comments:

A Funky Take on Star Wars

Via olde tyme e-migo Jay Busbee comes this gem of a video. I think this might be the coolest thing I have ever seen. Feast your eyes on "Blackstar Warrior".

Preaching the End of the World ... Again 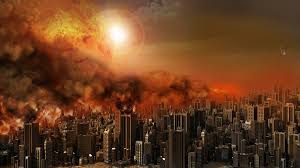 Thanks to highly quotable blogger extraordinaire Clark Brooks, I just learned the end of the world is tomorrow. Which sucks, because I had a lot of stuff to do this weekend. But then again, if we are all going evaporate into thin air in the next 24 hours, I guess it doesn't matter if I have milk in the refrigerator or not. But it also means I definitely need to rush getting a haircut, especially if I am going in front of St. Peter.

If you think about it, that's the ultimate job interview. Sure, they are looking at your credentials and all, but appearance counts. Especially if you didn't die doing something heroic like saving a herd of kids from a burning schoolhouse. Then you have an excuse. But if you die normally, then you better look sharp: teeth brushed, face shaven, and get a haircut. Everyone knows Jesus was the last hippie to go to heaven.

But anyway, a few years ago (seven to be exact), I wrote a piece for the FSU and Florida Flambeau about prophesies and predictions. So being that I don't have much time left, and that I have more important things to do (like get a haircut), I'm re-posting it here for my final blog post.

Like Ozzy said, see you on the other side.

Since the dawn of time, humankind has pondered when time will end. Knowing nothing lasts forever, hundreds, if not thousands of philosophers, scientists, religious leaders and everyday laymen have proposed their own ideas on the eventual demise of humanity.

Religion often goes hand-in-hand with apocalyptic forecasts. Just as many beliefs have their own creation story, their teachings usually conclude with a story about humankind’s or even the Earth’s final end. Possibly the most famous of all the end of the world predictions is the Biblical Book of Revelations.

Many organizations travel around the world preaching their interpretation of Revelations to the masses. One such organization, the Sure Word Ministries, recently visited Tallahassee. A flyer describing their 10-night event detailed such sermons as “How Near is Armageddon and the End,” “666 Part 1 and Plagues Upon the Land” and “Revelation’s False Prophet and his Cult Leaders.”

Surprisingly, one of the first “doomsday prophesies” predated the writing of the Bible. According to The Interactive Bible’s online library of date setters of the end of the world, the ancient Thessalonians had heard Christ had returned in 53 A.D. and that “the day of the Lord was near.”

The online library also lists other organizations that have attempted to warn the world of its impending conclusion. The Jehovah’s Witnesses, for example, have issued predictions the world would end in 1874, 1878, 1881, 1910, 1914, 1918, 1925, 1975 and 1984. Another organization, the Jack Van Impe Ministries, predicted disaster in 2001, bringing in “international chaos such as we’ve never seen in our history.” They further added that there will be “drought, war, malaria, and hunger afflicting entire populations throughout the [African] continent,” Islam would be larger than Christianity and “a one-world church will emerge, controlled by demonic hosts.”

Sometimes interpretations of the Bible have directly led to conflict. The online library discusses a 16th Century German peasant named Muntzer who, along with a group of followers, thought attacking the German government would cause God to return. Muntzer believed “the Lord promised that He would catch the cannon balls of the enemy on the sleeves of His cloak.” As could be predicted, Muntzer’s rebellion was suppressed when they were “mowed down by cannon fire.”

Even modern conflict has coincided with apocalyptic predictions. In 1991, Nation of Islam Leader Louis Farrakhan called the Gulf War “the War of Armageddon… the final War.”

Visitors from outer space have been cited as the future cause for the end of humankind as well. According to a Web site appropriately named “It’s the end of the world as we know it…again” (http://www.geocities.com/Athens/Oracle/9941), The Sacerdotal Knights of National Security announced in November 1997 that an alien had been captured. This alien cracked under CIA interrogation and “revealed his species’ nefarious plan to attack with a massive space invasion force, stripping the world of every last of its natural resources and enslaving all humankind.”

Opinions on the types of aliens that are planning to invade vary. California psychic Sheldon Nidle claimed that angels would join the “16 million space ships” arriving on Earth in 1996. In stark contrast, Robert Hallman called the extraterrestrials who were planning to destroy the world in 1998 “Satan’s minions.”

Finally, it must be noted that even the most respected historical figures have tried their hand in doomsday predictions. Sir Isaac Newton, famous for his writings on the Law of Gravity, not only wrote that Christ would return in 1715, but according to recent news reports, he also concluded the apocalypse would occur in 2060. Newton further predicted he would be one of the many saints to rule over the earth after this apocalypse.
Posted by Jordi at 5:09 AM No comments:

My interview from the BJ Upton Bowling Event

A few months ago, I went to the BJ Upton charity bowling event at Splitsville in Tampa. BJ personally invited me allowed fans to attend, so I dressed in my Sunday best, afro and all.

While I was there I was interviewed by local reporter Todd Grasley. I'm at the 2:14 mark.