A few months ago, rapper Joyner Lucas dropped a video for his song "I'm Not Racist". The video was a viral sensation, stimulating discussion in hip-hop circles and in the mainstream, to include CNN.

If you haven't seen it, here:

It is definitely a provoking video, touching many third rails. It should make you think. I've been thinking abut it for a while, and am finally writing about it now.

As provoking as it is, in many hip-hop circles, many thought Joyner Lucas didn't express the black side hard enough. On the blog VerySmartBrothas, writer Damon Young wrote that because American racism was originally a white invention, there should be no video. Young writes that white people should just stop using race as a way to divide.

That makes sense if you understand that the entire global capitalist system we live in is a white culture invention. For centuries, global leaders were white and did things in the interests of their more powerful kingdoms and countries. Leaders of non-white countries weren't even part of the conversation.

Along with Damon Young, other rappers wrote their own verses for Joyner Lucas's black man, expressing what they though he should have said. Rapper Mysonne's was perhaps the most viewed and impressive.

Mysonne has some strong points here, although I think they are less effective to the white audience he is trying to talk to.

There is no way for me to speak for all white people here. I can't do it. I won't do it. But what I can do is describe how I feel about the issues based on my background and influences and attempt to describe some of the people around me and why they feel the way they do. And then conclude with why I think Joyner Lucas's spoonfed approach is better than Mysonne's hammer.

I embraced hip-hop in the early 1990s. Hip-hop was growing, it was fresh, it was different. It was also thought provoking. I was feeling stagnated in my predominantly white Florida suburb and knew it wasn't the place for me. My town was great for families and some of my friends, but I didn't see a future there. I listened repeatedly to songs about getting out of the ghetto like my white suburban town was my personal ghetto.

Right after high school, I joined the military. That adventure led me to college, then to city life,
and then to a job that required world travel. My career path has forced me to open my mind academically and socially. I wouldn't have it any other way.

Unfortunately, not all my white friends and family have had those experiences. Some stick to the rivers and the lakes they are used to.

A few years ago for example, I had a white friend drunkenly say "I wish I was black for a day, just to see what it's like."

Even though I had been drinking as well, that statement sobered me up and stopped me in my tracks. Cold. I wasn't about to get into a deep philosophical discussion with her about why what she said was the most white privilege thing she could ever say or why it was horribly ignorant. After a day's worth of drinking, nothing good could have happened from that. So I let it be. But years later, it still bothers me.

I don't wish to be any of my friends. Be they black, white, rich, poor, gay, straight, man, woman, tall, or small. I might wonder what it's like to have a wife, a minivan, and a house full of children, but that's a lifestyle, not a born condition.

Back in the wonderfully innocent 1980s, there was a movie entitled "Soul Man" starring C. Thomas Howell. In the movie, Howell's character dyes his skin and he acts "black" in order to win a scholarship to Harvard. Although the movie is full of awkward hijinks and social commentary, the most powerful part is at the finale when Howell's character has a conversation with James Earl Jones' character about the black experience.

"I don't really know what it feels like, sir. If I didn't like it, I could always get out."

The closest I ever came to experiencing systematic discrimination was while I was in Afghanistan. Work culture on military bases in Afghanistan is very hierarchical. US Military personnel are on top, foreign military personnel are second, followed by US contractors, then foreign contractors. As a US contractor, I couldn't take the US military bus around the base, I couldn't use the better military doctors unless there was a life-threatening injury, and I couldn't eat at the dining facility at the same time. All because of my label.

I didn't like that very much. I didn't have the freedom to eat when I wanted or see the doctor I wanted. I had to use the facility that was for "my people". Perhaps it was "separate but equal", but the separation was not something I was used to.

Fortunately, when my time in Afghanistan was over, like C. Thomas Howell's Soul Man, I could return to my white American comfort zone.

During one conversation, my translator friend told me one of the most eye-opening things I have ever heard. He said the election of President Obama in 2008 gave hope to the Hazara people. According to him, the Hazara felt that if a black man could become President of the United States, then perhaps one day a Hazara could become president of Afghanistan.

That is the type of social advancement and trailblazing America should be doing. We should be empowering not only our own people, but we should be an inspiration for the discriminated and downtrodden around the globe. America should be the land of opportunity, where your potential is determined by your input, not where you were born, the color of your skin, your religion, or the school system you are near.

Of course, a country as wide and diverse as America will always have different points of view. We will never be unified in thought. Some of us prefer a day on the farm and some prefer a day at the beach. Some want to live a life of quiet solitude and others want to be knee-deep in the hustle and bustle of metropolitan life. What we do for fun and what media we consume typically aligns with that lifestyle.

And that brings me back to Joyner Lucas and his video. For those who are comfortable in our society, media that expresses views that society is not acceptable for everyone is upsetting. It is easier for those who are comfortable to listen to music that celebrates their comfort status. That's what country music does. It celebrates the present - the small town, the pretty girl, the pick-up truck, and the complacent country lifestyle. Country music is very conservative. It does not aspire for progress.

That's why many white people like it so much.

Counter-culture music requires upsetting thought. Be it punk, hip-hop, metal, or folk music. Counter-culture requires unpacking and seeing things from other perspectives. Not every white American wants to be challenged to do that. Hence sometimes media that slowly opens up conversation is a better way to inspire change, kinda like hiding a pill in ice cream.

Unfortunately, when scared, white people can retreat to their bubble. They can go back to listening to country music and hanging out in an all-white world. As a white person, let me tell you, it is easy to do. It is also lazy. White people should do better.

There are a lot of great things in America. But there is a lot our predominant culture still needs to work on. We need to keep moving forward and we need to understand each other. "Others" are not going away. If understanding them requires baby steps, then take baby steps. If that means jumping into deep philosophical literature, then do that.

One Month in Qatar – Settling In and Going Out 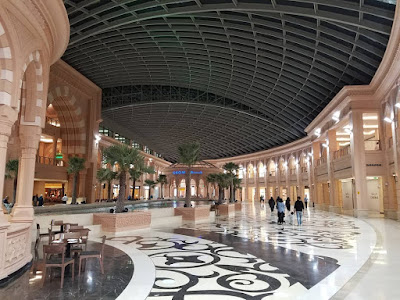 Try new things and be healthy.

That was the advice I gave my 10-year old nephew before I began my adventure to Qatar. I am always encouraging him to be more adventurous and more active.

After my first month in Qatar, I realized the same advice applies to me.

Unlike other times I have worked with the military, this is trip is less “deployment” and more “business trip”. I am living on the local economy and riding to the base every day for my daily shift. I shop at the local grocery stores, eat at the local restaurants, and peruse the local markets.

I do work. I work 50+ hours a week, 6 days a week, and have Sundays off. On Sunday, I try to explore – either sight-see or eat somewhere new. So far outside of my neighborhood, I have been to the main souq (market) and to The Pearl, a high-end residential and shopping district on a man-made island slightly off the coast of Qatar.

I am trying new things.

I am also trying to take a lot of pictures; you can find them here:

Recently, a friend mentioned that Doha sorta resembles Miami. I think that is a fair comparison. Both are large affluent coastal cities with splashy new buildings and a heavy ethnic influence.

While there are some similarities to places in the States, there are definitely some differences. First and foremost is the government. Qatar is governed by the al-Thani family. An image of the Emir is on almost every building and on bumper stickers, walls, and fences. His face is everywhere.

Another huge difference is driving. Thousands of cars in a small area with construction everywhere makes for very congested streets. Although hearing horns, seeing people get cut off, and witnessing accidents are regular occurrence, I have yet to see any acts of road rage. No yelling, no middle fingers, no fights. It’s like they all understand offensive driving.

The third difference is the lack of alcohol. While there is alcohol allowed in Qatar, it is restricted to those with permits or to international hotel bars. Since I don’t have a permit nor have been to an international hotel, I haven’t had a drink in a month.

And that brings me to my other piece of advice: Be healthy.

My goal out here is to eat healthier (when not tasting local fare) and develop a regular gym schedule, something I struggle with in the States. I am down a few pounds already.

There are still a lot of things I have yet to do out here. I haven’t visited any of the museums or cultural areas, I haven't driven on the sand dunes, and I haven’t explored the City Center. But with settling in and getting out a bit, I am definitely calling the first month in Qatar a success.
Posted by Jordi at 10:58 AM No comments: