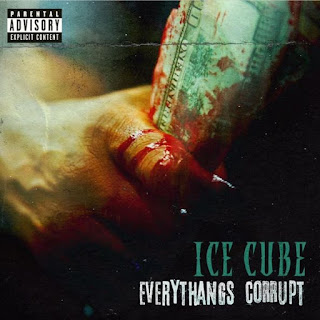 I haven't written about music in a while, but a new Ice Cube album is great reason to get back to it.

I grew up on Ice Cube. Without knowing anything about Ice Cube, The Predator was the first CD I ever owned. I asked for it for Christmas 1992 on the strength of the Wicked video. I didn't know anything about Cube's history, NWA, or his political views. For a suburban white kid who owned MC Hammer, Kid'N'Play, and the Fresh Prince, Ice Cube was eye-opening. He was punk, metal, and everything my parents didn't want me to listen to.

(This was when rap surpassed heavy metal as White America's most objected music. Parents went from being  scared of Satan and suicide to objecting to anti-police and pro-Black messaging. The early 90s were an interesting cultural zeitgeist.)

After Cube's Lethal Injection album, I tuned out. I migrated into a rock/post-grunge phase only picking up the occasional Wu-Tang, Def Squad, or Boot Camp Clik album. By the time I got back into hip-hop, Cube was making club songs with the Westside Connection and had gotten into acting. He wasn't the angry political commentator of years before.

With the election of Donald Trump, I predicted political hip-hop would make a resurgence. The anti-Trump movement was too powerful for hip-hop not to capitalize. Sure enough, artists who have rarely been political such as Snoop Dogg have released songs or images bashing President Trump. With that in mind, an Ice Cube comeback was not surprising. It was almost expected.

Ice Cube has an interesting background with Donald Trump, however. Besides citing Trump as a rich stereotype in a song (as most rappers in the '90s did) , Cube was also misquoted as supporting Donald Trump in a 2016 interview. In the interview (see below) Cube says "Trump is what every American aspires to be" but advises that Trump will have a problem relating to poor people.

Ice Cube wasn't angry at Donald Trump in 2016, although he did later tweet that he would never vote for that "m*therf*cker". So where does the anger at Trump come from? The song "Arrest the President", while good, lacks detail. None of the verses back up Cube's claim that Trump is Russian intelligence.

Where Ice Cube does have legitimacy is his anger towards white supremacists, who he talks about in "Arrest the President" and in "Chase Down the Bully". Cube discusses their hypocrisy and their bullying tactics and meets their aggression with his own.

Other positives on the album are the Parliament tribute "That New Funkadelic", "Everythangs Corrupt", and the final track "Good Cop, Bad Cop", which quotes Ice Cube's verse in NWA's "F*ck the Police".

After the aforementioned songs, the rest of the album misses the mark. After going for the jugular and attacking the President and the enforcers of systematic racism, Ice Cube then attacks drug dealers and users. That angle might have worked in NWA's "Dope Man", when Ice Cube's vision was limited to the streets of Compton, but with a huge platform and a vision from the boardroom, Ice Cube should be attacking the systems that keep people poor and on drugs. Instead of going after pill users, he should be going after doctors prescribing or corporations producing and marketing opiods and other drugs.

Another negative I have with the album is that Ice Cube doesn't dip into the well enough. Although he quotes his "F*ck the Police" verse in "Good Cop, Bad Cop", he would have been well-suited to drop other references to his classic works throughout the album. He would frequently reference his previous albums during his prime, I am not sure why he opted to do so now. This would have made his intro much stronger, where instead of saying he is the Super OG (his new gimmick name), he could have said the N*gga You Love to Hate (his old gimmick name).

Other problems I have with the album include Ice Cube's lack of song direction and lyrical missteps. For example, the song "Fire Water" is particularly a mess. It not about anything and during the journey to nowhere Ice Cube calls Princess Leia a "crazy bitch". Why did Ice Cube think calling a feminist hero a crazy bitch was a good idea? With so many other crazy women to choose from (any on reality TV, for example, or a Kardashian), that was one example of a really bad lyric.

Other bad lyrics include, but are not limited to:

I hate to say this, but Ice Cube may have needed a co-writer.

Everythangs Corrupt is not Paris's Sonic Jihad, the Coup's Party Music, or anything from Public Enemy or Dead Prez. It also definitely isn't Kendrick Lamar's To Pimp a Butterfly. Socio-political rap has soared since the days of AmeriKKKa's Most Wanted. Early in his career, Ice Cube kicked in doors and continued where he left off with NWA. These days, he seems to have lost his fastball. His best now would be an average track on his first four albums.

Perhaps on his next album, Ice Cube needs to dip further into his past. Releasing a track with Chuck D would be helpful. Having cameos from Paris and Kendrick Lamar would great as well. Not since Mack-10 has Ice Cube brought up new rappers, maybe the time is now.

But then again, when you have your own basketball league bankrolled by the Qataris and you have another Friday movie and another Ride Along movie coming out, maybe you only have energy for one good pitch per album. Maybe you want to save your fastball for other fields.

Of course, I can't hate on Ice Cube for putting his energy into his other passions. The Big 3 and his movies have done very well. He is a multi-media superstar who has transcended music and become an entertainment icon. But can hip-hop take an entertainment icon seriously? Should listeners believe Ice Cube is legitimately angry at the system that has paid him millions?

I do believe Ice Cube still has some anger left in him. He still looks at the world through his perspective. But I believe in his time away from music he has regressed as a socio-political voice in hip-hop. Whereas in years past he could make an album that had meaning from top to bottom, today he is good for a few good songs and a solid tribute to George Clinton.
Posted by Jordi at 2:37 PM No comments: