Kudos to the People of Rhode Island

Although I have never lived there, I've always had an affinity for Rhode Island. For some reason, I picture Rhode Island as the most underdog of all the states, constantly fighting for its survival amongst states that would like nothing more than to annex it into their territory. Although I might be wrong, I imagine Rhode Island as a remnant of state-creating policies of way-back; that if we were to re-create the states and re-draw the lines, Rhode Island would cease to exist.

Many moons ago, back in my early days of journalistic integrity, I wrote a piece for the FSU newspaper advocating independence for Rhode Island. I wrote about a plan to conquer Rhode Island and lead its inhabitants to a life free of tyranny and without the shackles of oppression.

In my article, entitled "Operation C.O.R.I.: Conquerors of Rhode Island", one of my biggest points on why the people of the state would join my efforts and cooperate with my revolution was that "it is neither a road nor an island. The inhabitants have to call themselves “Islanders” and they don’t even live on an island." I of course blamed The Man for this deception.

So it was with great joy that I read my idea to change the state's name, which I at most considered a far-fetched fantasy, had grown closer to reality. Last Thursday, the Rhode Island House of Representative voted 70-3 to let residents decide whether or not to change the official name of the state. This is fantastic news. Finally, the people are being given an opportunity to fix a centuries-old problem of misidentity.

Looks like The Man will still have his way with the people of Rhode Island.

It will be a glorious day indeed.
Posted by Jordi at 11:31 PM No comments:

The Man Makes You Work

I've been a big fan of the Afro-Squad since way back in the day. And on that horrible morning when The Man swooped in and stopped their flow for while, I cried. Who was going to teach me how to be funkier than Dolemite wearing sweaty gym socks?

But now, of course, the Afro-Squad is back and better than ever. Much to my surprise, shortly after I found them doing their thing, they asked me if I wanted to contribute. Of course. Would you say no if Bootsy Collins invited you on tour? I think not. So as the Afro-Squad keeps things funky with the ladies and the leglocks, I'm going to drop a little knowledge about what The Man is up to. Damn the Man.

As Socrates once said, The Man is everywhere, in everything, and completely full of it. You know, to be honest, I don't know if Socrates actually said that. Maybe I just made it up. But I like it.

Anyway, if you didn't know already, The Man controls most of the system that is our lives. He makes things cost money so you have to work, he makes you work at work so you have only a few precious hours at the house to sit down and watch some movies or listen to some tunes. Then The Man charges you for the electricity you use so you have to go back to work to pay off the bills. See, it's never ending. That's alright though, I'll go to work. To paraphrase the rapper Paris, don't let The Man know you understand his plan.

But you know what really makes me mad? You know what really tweaks my melon? Ever see people get pulled over by The Man on their way to work? What sort of trickery is this? Yeah, The Man even gave me a ticket when I was trying to get to work on time. Totally not cool.

Say you have to go work for The Man way early in the A.M. You wake up, clean yourself, grab some grub, and damn, you forgot your ride is on "E". Can't get to work with no gas. So you swing by the gas station for a quick fill-up. Now you are running late. The Man will not be happy.

After you throw some gas in the ride, you try speeding a bit to make up some time. But who pulls out behind you? Those flashing lights. The fuzz, the coppers, the po-lease. Damn The Man again. Now not only are you even more late, but because of the ticket he was kind enough give you, now you have to pay The Man some of your hard-earned cash, which means you can't take your honey out on a date unless you work a few more hours. And that's if she's not finding another guy to spend time with while you are spending all your hours at the j-o-b. Which of course, you are lucky to still have; because you know The Man doesn't take kindly to being late.
Posted by Jordi at 5:21 PM No comments:

A Baby in a Cubs bar 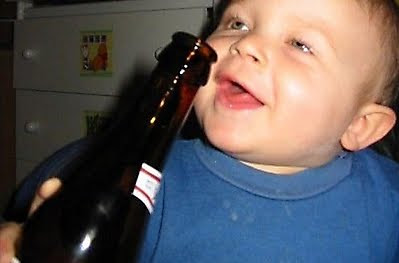 The name is Hack. As the title up there implies, I'm a fifth generation Wilson, named after my great-great-grandfather Hack. Of course, my parents weren't the most original, as they named me Hack as well. You would think somewhere along the way someone would think out of the box. What if I was to become a reporter? Huh? How would a writer named Hack be able to keep a career? But I digress.

As you can expect, I was born into Cubs lore. Next to Ernie the fourth and Ryno the third, I am practically royalty. Of course, I haven't been around too long, but what I don't understand is the doom and gloom you Cubs fans are always talking about. For my whole life the Cubs have been pretty good. They've always had that Lee guy at first and that nutty Zambrano character on the mound. You know, I think Big Z would have fit in well with Great-Great-Grandpa. If it wasn't for those off-season regiments and that fitness thing, I think ol' Z would be the type to throw down a spirit or two. Or four or six.

As you can see, I'm a bit of a drinker myself. It runs in the blood. Not only am I a Wilson, but I am also a fifth! From the moment I got off my mom's boob, I've had a bottle of the Lord's holy brew in my hands. That's a fair trade, I think. I also like to think I can already out drink the average sorority girl. Bring it on, Brittney!

Now I don't watch too much of the Cubs. My attention span is still only about 15 seconds, tops. Most of my days are filled with the regular rigmarole of eating, sleeping, or taking a dump in my diaper. And I occasionally cry. I don't have time to watch baseball. But I do catch a Cubs highlight every once in a while. My old man, Hack IV, was a big fan.

So what I am doing living in a Cubs bar? Well, a few weeks ago, the old man and my grandfather, Hack III, threw back a few too many Old Styles and left me in the parking lot. Thank goodness a nice bartender decided to bring me in and keep me around. From what my new dad (that's what I call him) told me, one of the regulars wanted to sell me to the Chinese. Something about payback for the great Gremlin invasion and impressing Phoebe Cates, whatever that means.

Now I live here, ensuring the wings are hot, the burgers are greasy, and the beer is tasty. I'll be popping in every so often to babble about something or another. Don't worry, I should start making sense in about 18 months or so.
Posted by Jordi at 3:03 PM No comments:

While mindlessly perusing the Web, I found this video on www.Archive.org:

Description: This is a clip from a Universal Newsreel dated September 15, 1937. This clip features Dolores Gonzales and Clara Mortensen in a bout that took place September 1, 1937 in the San Antonio, Texas Walkathon arena. The referee is Dr. Karl Sarpolis, also a wrestler. This is the first professional female wrestling bout held in San Antonio. Clara won the match, but later faced Dolores again for a re-match because of claims that Sarpolis was an unfair ref.

Wow. Hard to believe this clip is 80 years old. There are some moves in here that would make even the most modern fan get off their feet. Check out the flip at the 1:25 mark and the spinning whatever-it-is that spills into the crowd at the 1:31.

A Whap off the Old Block 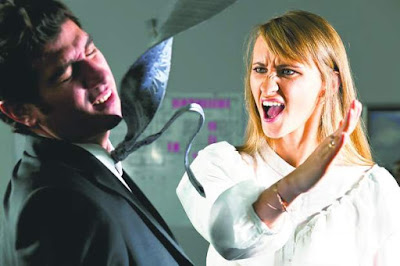 When I was little, my father was famous. He was the most well-known back of the head slapper in the neighborhood. And he was the house discipliner. He wasn't scared of anyone, but we were scared of him. If you acted up, acted out of line, or acted the fool - whap! - my dad would smack you in the back of the head. He was like an old west gunslinger, hands in his pocket one moment, an unexpected whap!, and his hands right back where they began.

Over time I've noticed I've grown a lot like my dad. The hair on top is thinning, I waste my nights drinking and talking about the government, and I perfected the magic art of slapping the back of someone's head. I became quite the master. I could slap someone without them even knowing it was me. Even when we were the only two people in the room. Left-handed, right-handed, it doesn't matter. I was an ambidextrous head-slapper.

Unfortunately, however, my penchant for slapping heads became a bit of a problem. The urge was uncontrollable. I couldn't pass a bald-headed person without giving their round, shiny dome a nice, hard whap!. One day, for example, I was stepping out of a public bathroom stall and absolutely could not control myself from smacking the head of a gentleman standing at a urinal. My hand hit the back of his head, his front of his head bounced off the wall in front of him, and he collapsed in a heap in front of me. That was last time I went out to my favorite pub.

I didn't fare any better in other places either. While in church a few years ago, I smacked the back of the head of every person in an entire pew as they were bowed in prayer. Their painful yelps sounded like a choir of anguish. Needless to say, I was quickly banished from Father Carmine's Community of the Faithful.

Desperate and alone, I went to the only place I knew that could offer solace: the local stripclub. An amazingly bad idea. Although I was able to restrain myself from smacking the back of the heads of the gentlemen tossing dollar bills to the dancers, I was quickly escorted out in a bouncer's restricting embrace after I smacked the back of a stripper's head as she hung upside down off a pole.

My passion to imitate my father's disciplinary technique became my cross to bear. I didn't know how to control myself. I finally sought psychiatric help.

After six months of deep, prolonged mental probing, I am proud to say that I am cured. I no longer have the urge to smack the back of anyone's head.