What Happens There Also Happens Here 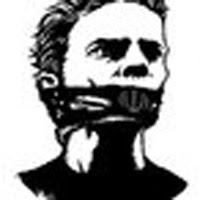 I found two interesting articles last week on the overreactions of governments to speech on the Internet.

In Morocco, an 18-year old was arrested for posting an unflattering image of the king on Facebook. The government claimed the youth was "defaming Morocco's sacred values".  As a response, several Moroccans set up Facebook group pages and posted as many unflattering pictures of the king as they could find.

Meanwhile, in the land of the free and the home of the brave, two Europeans were denied entry into the United States after one of them tweeted that they were going to "destroy" America. Of course, the two enthusiastic travelers didn't mean they were going to send America back to the Stone Age, they merely meant they were going to party. But the all-knowing Homeland Security booted the pair and sent them back across the Atlantic.

Big Brother and The Man are watching here, there, and everywhere.
Posted by Jordi at 7:25 PM No comments: 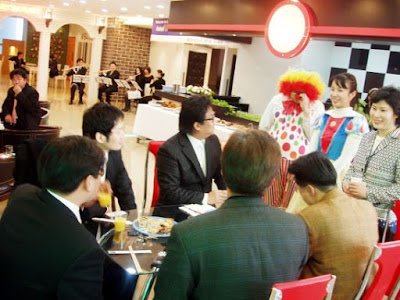 After being laid off several months ago, I did everything I could to find work. I did lunches with power brokers and went broke at power lunches. I signed up for new job sites and cited new job signs. I looked in nooks and crannies and looked at jobs for cooks and nannies. Nothing panned out short of washing pans and a hand-out.

Yet despite my own personal failures, I’d recommend all the networking, job sites, lunches, and the like to any job searcher. They all have potential, potentially. But there is one recommended job searching method that I don’t believe is effective in the least. One job searching method that is so horrendously ineffective, so overrated, and so flat-out meritless it is better to be unemployed than to get bathed in its embarrassing embrace.

If you haven’t guessed from the title of the post, I am talking about the Job Fair. The modern day sullen spectacle of utterly useless professional pageantry. A voluntary auction where people beg and butt-kiss for a chance to labor hard hours for The Man.

I’ve been to several job fairs since I lost my last job. From industry specific to general, they’ve all gone the same way: thousands of job hunters get dressed up, shake hands, hand out resumes, collect business cards, and go back to being unemployed. At every job fair it’s the same thing. Rinse and repeat and in two weeks, the hopes and dreams of being employed will wash away.

Even worse, half the recruiters or job reps I’ve talked to have told me to go online to apply or email them my resume. Then why did I get dressed up? Why did I struggle for 15 minutes trying to tie a tie when I could have been checking job fair sites at home while eating Cheetos in my underwear?

So being the connoisseur of capitalistic carnivals that I am, I’ve come to the conclusion that job fairs need to be more interesting, more useful, and more fun. They should be more than just meet and greets. They should be both practical and entertaining.

They should be more like state fairs. Everyone loves state fairs. Why? Because they are awesome. And job fairs need to steal a bit of that awesomeness.

First of all, job fairs need clowns. Lots and lots of clowns. Not just the step-and-fetch-it corporate clowns that are normally at job fairs, but real red-nose, rainbow wig, smiley makeup clowns. Job seekers need to be optimistic, right? There should be clowns to greet people as they walk in to the job fair. And clowns can walk the aisles smiling, making balloon animals, and shocking unsuspecting recruiters with hand buzzers.

Second, job fairs need cotton candy. They need clowns to give out cotton candy when job seekers walk in and then hand out more cotton candy as job seekers peruse the aisles of employers. Cotton candy is much better than the piddly plastic pieces of crap and grab bag garbage job fair sponsors and booths usually give out these days.

Third, job fairs need games. They need bottle toss. They need ring toss. They need duck shoot. They need the games that make state fairs so fun. The games that award giant stuffed Kung Fu Pandas and goldfish that die in two days. Games at job fairs however would give different prizes and wouldn’t cost the price of a token. Job fair games would cost only a copy of a resume and would award the player first consideration for any job they want to be considered for at any employer at the job fair. I think that’s fair fare.

Games need to be prevalent throughout the fair and held not by the job fair sponsors but also by each individual job stand. These games would be great icebreakers instead of the played out boring song and dance of “Hi, my name is ... and I am looking for a position as a …”. That is not only dull, but tells nothing about the person. State fair-type games would give employers insight into how competitive the person is and whether or not they have an aggressive killer instinct. Some companies might find killer competitiveness important, and some might find it a turn-off.

Another staple of the state fair that I want to see at job fairs is the highly entertaining freak show. Instead of the traditional freaks of the natural world such as the bearded lady or the world’s smallest, tallest, or fattest man, however, I’d like to see the freaks of the corporate world such as the woman who swims in perfume, the ageless man who won’t retire, the middle manager with the permanent brown nose, and the man who eats tuna for lunch every day. Some companies could even donate freakish absurd objects such as the coffee pot that was never cleaned or the fax machine that actually worked.

Finally, no state fair would be complete without an elephant ride. And job fairs should also incorporate these amazing staples of mammalian movement. Instead of riding the elephant as visitors would at a state fair however, elephant events at job fairs would instruct prospective job hunters to pick up plodding pachyderm poop as fat cat CEOs ride atop eating grapes served by beautiful buxom blondes in bikinis.

Hey, not all jobs are fair, even at the job fair.
Posted by Jordi at 1:59 AM No comments:

A Letter to Jimmy Kimmel from a Tampa Comic 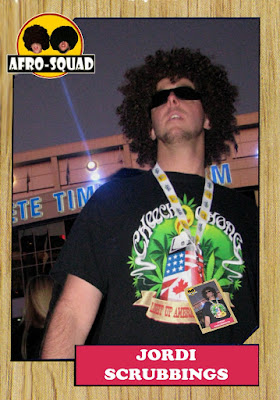 May I call you Jimmy? I saw a guest on your show call you Jimmy. But I am not a guest. I am a resident. A resident of Tampa, Florida. And additionally, I am also a comic and writer here in Tampa. I've performed at the Tampa Improv a few times. Sure they were showcase shows and open mics, but you have to start somewhere, right?

And that brings me to why I am writing. I recently read that you had some not so nice things to say about the city I call home. Twenty years ago, you were kinda sorta right where I am now, a nobody in the grand scheme of entertainment trying to claw and scratch your way up at whatever venue or venture would take you. In your case, it was the Q-105 radio show. For me, it is comedy open mics, sports blogging, and freelance music writing.

So what's with the Tampa hate, man?

Sure, you are a big time talk show host and a celebrity with tons of credits and acclaim, but that's no reason to piss on your roots. There are many other comics and entertainers here trying to entertain and make people laugh, some of whom actually like living in Tampa or even claim Tampa in their biographies. Many would love to be in your shoes one day.

What you said about Tampa hurt, Jimmy. It hurt my heart. It hurt my soul. It hurt some places only the strippers in Tampa can make better.

Like you, I've had some bad times here in Tampa. I had my car broke into, I've had friends assaulted, I've lost two jobs. I even got food poisoning. But you know what, I still like it here. And if I ever make it big, I'm not going to bad mouth a city over a few bad experiences.

That said, Jimmy, I would like to extend an invitation to you to come back to Tampa and check out what we have going on and maybe tell us how we can be better. I'd like to see you help, not hurt, Jimmy. Unfortunately, however, I will not be in town for the next year. The economy here is so bad for people with my skill set that after almost a year of being unemployed, I had to find a job in Afghanistan. So I'll be there.

But, in closing, Jimmy, if I could call you Jimmy, I wish you the best with your show and I hope someone else makes it from Tampa, someone who is a little nicer to their humble beginnings. Like my great-granddaddy once said, you can't grow a good mullet if you pull out all your roots.