On the field at Doak Campbell Stadium at Florida State University 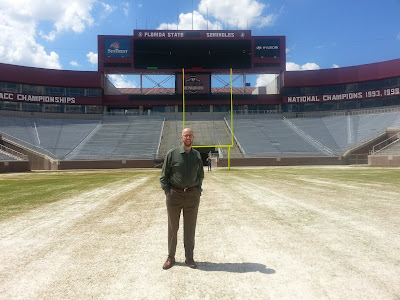 When I was a student at Florida State, one of my biggest aspirations was to go on the football field at Doak Campbell Stadium. I knew the right people, but I never took advantage of the opportunity. I even worked in the administrative offices surrounding the stadium and used to nap between classes in the bleachers. But I never made my way down to field level.

In April, as part of the Tampa Bay Seminole Club, I was allowed to tour the new Stadium Club wing of Doak Campbell Stadium. The area was under construction, so hardhats were required, but we were allowed on the field to look up at the new level to get "the big picture". Although we were there to look at the construction, I couldn't help but to get a few pictures of myself with the other side of the stadium - the completed side - in the background.

A few months later, in the end of November, I was given an even greater opportunity: to be on the field with the Tampa Bay Seminole Club before kickoff of Florida State versus Florida - the biggest rivalry game of the year. I couldn't turn that down.

The reason we were invited to be on the field before kick off was to present our very generous contribution to the FSU Care Program - an FSU scholarship and life mentor program that assists underprivileged high school students, many from broken homes, with the opportunity to go to college. It is a big deal and has helped a lot of kids do great things at Florida State.

Needless to say, our presence on the field was small potatoes compared to the impact our donation to the CARE Program will have. But it was cool for us to be on the field in front of thousands of FSU fans, alumni, and students applauding us for our actions.

And, on top of being on the field, we were also shown on the jumbotron. Definitely one of the most memorable FSU-related experiences I have ever had. It's going to be tough to top that.

Email ThisBlogThis!Share to TwitterShare to FacebookShare to Pinterest
Labels: FSU

Rest in Peace to a classmate we called Devil Man

I hate writing these posts. I really do. But writing is my way of processing.

Yesterday I learned that a high school classmate of mine, Tom Patton, passed away. Although I last saw him in 1995 at our graduation, Tom and I reconnected on Facebook in February 2011. Facebook is also how I learned the news of his death.

Reconnecting and being friends on Facebook is a weird thing. It is a little more revealing than exchanging Christmas cards, but only as revealing as people volunteer. I can't say I reconnected with Tom on a deep personal level, but I can say we shared many laughs over many memes and videos. Tom posted a lot of twisted humor pictures that I "liked" and he "liked" a lot of my humorous posts as well.

Unfortunately, Facebook only keeps private messages for a few years before they are deleted. Good for Facebook, but bad for memories. I know I caught up with Tom right after we connected, but unfortunately the conversation is gone. The only direct message I have with him was one from November 2016.

Sadly, he never gave me a call and we never caught up.

Our last interaction on Facebook was on December 10th, 2016. I wrote a post to announce I graduated grad school. Tom "loved" the post. Although it was only a click and only a button away from "like", that was an awesome gesture by Tom - a virtual "Great work!", better than a virtual "Good job.". Tom was one of only two people who I didn't talk to often who loved the post.

Tom's support, and that he "loved" something I worked hard to accomplish, will be a lasting memory.

As I mentioned, I met Tom in high school. We had several Electronics classes together through our junior and senior years. Electronics was a vocational elective that taught students the basics of electrical circuits and other elements of the field. Taught by Mr. Dibben, the class featured an array of characters - personally, I was kicked out of class by Mr. Dibben several times and forced to sit in a chair outside the classroom (I don't remember why).

Among the most colorful (since black is a color) characters in the class was Tom. Because of his penchant for wearing black heavy metal band shirts (Danzig, Misfits, etc), Mr. Dibben gave Tom the nickname "Devil Man". The name stuck in the classroom - I don't ever remember calling him "Tom". From what I remember, Tom got along with everyone well enough, even though he wasn't the most talkative person in the class.

To be honest, I'm not sure if Tom liked the "Devil Man" nickname. He didn't seem to mind and went with it well. Of course, nicknames in high school might be awkward as adults, so I rarely used it in our Facebook conversations - the last example excluded.

Ironically, I remember telling him that I had become a "devil man" as well. I became a metal fan when I moved to Tampa, saw some of the heaviest and loudest bands around, and had my own collection of band t-shirts that caused interesting looks. Quite the change from the hip-hop-only playlists I had in high school.

I was disappointed to not see Tom at the Eau Gallie High School Class of 1995 20th Reunion. It would have been great to see him.

Rest in peace, Tom. I appreciate the love. One day we will catch up.
Posted by Jordi at 10:54 PM No comments: