Interviewing a 5-year old on creativity and imagination

I've made some creative videos in the past, but this is one of my favorite ones ever.

As part of an MBA class I took last year, I had to create a project that described my thoughts on creativity, especially as it pertains to the workplace. The premise was to inspire thought and out-of-the box thinking - things I have never been short on. While there was really no way to fail, the more creative the project, the better.

I knew from the start I wanted to create a video. This is only a sample of the whole video, which had samples my stand-up, clips from home movies, and bits from other endeavors. The video was a "journey" through a life of creativity. What follows is the "new" part of the journey, an interview with a pure-of-mind and imaginative young person.

I like to think I did his imagination justice. 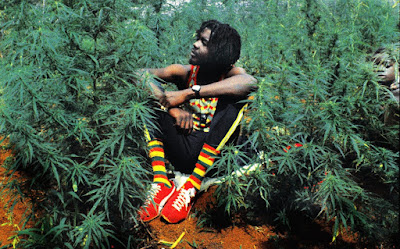 Here is something I was shocked to find out:

Weed is illegal in Jamaica. Seriously.

Peter Tosh sang about it.

Entire albums are dedicated to it.

I was convinced it was legal in Jamaica. There was no way you could have convinced me otherwise. When I think of Jamaica, I think of the following:
But I guess this whole time Jamaica never thought to "legalize it". Until now.

Throughout this year, the Jamaican government has been meeting, debating, and considering legalizing marijuana. According to a USA Today article in June,


The motivation behind the legal pot drive is largely economic. Jamaica's economy has suffered from slow growth, high unemployment (now 13.4%) and high debt for the past two decades, according to the World Bank.

Jamaica, where about 37,066 acres grow marijuana, is the largest Caribbean supplier of pot to the USA and other Caribbean islands, according to the State Department's 2014 International Narcotics Control Strategy Report.


By the end of September, the Jamaican government had drafted legislation to decriminalize the drug, according to the BBC. The Denver Post reported recently that the government of Jamaica had even contacted a Denver-based firm to help with the legality of the issue.

Interestingly, the trend to legalize weed in other countries has "sparked" the change in legal attitudes in Jamaica.


Previous efforts to decriminalize marijuana, or "ganja" as it is largely known in Jamaica, failed to advance because Jamaican officials feared they would violate international treaties and bring sanctions from Washington. But those concerns have eased now that a number of nations and some U.S. states have relaxed marijuana laws.


But my biggest concern is how the Jamaican legal system will compensate those who might have been unjustly prosecuted for defending their herb fields in the days when marijuana was illegal.

I am thinking particularly of a certain grower who was constantly harassed by Sheriff John Brown. After the grower was threatened with violence for an unknown reason, he did what anyone in his position would do: he shot first. While he contritely admitted to killing the sheriff, he claimed to have no part in the death of the deputy.

With weed soon to be legal, will the Jamaican government apologize for its terrorizing behavior towards growers? Will growers be forgiven for shooting sheriffs?
Posted by Jordi at 10:57 PM No comments: