Ancient AfroSquad video from back in the day

While digging in the underbelly of the Internet, way below the Prime Meridian, far below where Optimus Prime dare go, I found an ancient video. I dusted it off, gave it two blows to the nose, and checked the scrolls. It was a sign by the AfroSquad forefathers, who couldn't decide among the four of them who the daddy was. So they dropped this piece of funktasticalness on the world. It's so funky it makes your grandmother swap out her gym socks.

Seven years ago, the founders of the AfroSquad posted this. Hard to believe youtube has been around that long. Yet The Man still prevails.

AfroSquad for life.
Posted by Jordi at 9:30 PM No comments:

George Clinton and the Funky Seminoles

Last week, Father of the Funk, the great George Clinton was spotted at a Florida State Seminoles basketball game. GC was getting funky and getting in rhythm with the rest of the Seminole faithful, doing the Tomahawk Chop.

From the reports, George Clinton is friends with FSU basketball coach Leonard Hamilton. After the game, George Clinton took to his twitter to retweet many fans who tweeted their excitement at having the music legend at the game. There aren't many celebrities in Tallahassee, but Clinton has called it home for over ten years. Great to see him interacting with one of the local universities.

This is the first I have heard of George Clinton being at a Tallahassee sporting event. I wonder if he goes to FAMU games at all. Either way, I hope he goes to more. It would be great to have the funk helping out the Seminoles.


On the subject of George Clinton and his musical legacy, here is an interesting article about Afrofuturism - the use of sci-fi in black culture from Sun Ra to Parliament-Funkadelic to modern artists. Interesting read.

Gotta have that funk.
Posted by Jordi at 11:46 PM No comments: I've been meaning to comment on this link for a while. Way back in September, I discovered this great blog on the least competent Jedi in the Star Wars galaxy. Granted, it only talks about the "publicly known" Jedi, but it does mention some Extended Universe Jedi. It is an interesting list.

Everyone associated with Anakin Skywalker is listed at the top of the list. Except Anakin himself. Which is kinda weird. It is almost as if he is exempt from the list.

Yet he is quite incompetent himself. After all, he went to the dark side. He slaughtered Tuskin Raiders. He murdered a bunch of kids.

But here I have to add to the incompetency of the Jedi Council. How did Yoda let Anakin get away with murdering Tuskin Raiders? He felt the disturbance in the Force. He knew it happened. Why was Anakin never asked about this by the council? Even worse, Anakin admitted his actions to a member of the Senate. Padme knew what he did and never told anyone. Not even Obi-Wan. Was she afraid they would suspend Anakin? That's what should have happened. Unless Padme  had little concern for the Sand People.

JUSTICE FOR THE SAND PEOPLE!

Here is an entire bulletin board conversation about the topic of Anakin and the Sand People. Interesting read.

So put me in the camp of those who think Yoda had a touch of incompetence.

The analysis of Luke Skywalker is also quite interesting. The rescue of Han Solo was unnecessarily complicated. Perhaps Luke doubted his ability to go in to Jabba's palace, kick ass, and rescue Han. Perhaps Leia was the only one who knew the code to unfreeze the carbonite - possible but unlikely considering it came from Lando's Cloud City. Chewbacca probably wanted in so bad, he wouldn't let the mission go forth without being a part. Interesting how he his confidence in Luke's plan has grown since the Death Star rescue plan in A New Hope - where Chewie was also a prisoner.

The strongest being on your team, and your plan (Twice!) is to put him in shackles. Makes perfect sense.

Sure, Luke wouldn't want to involve the entire Rebel Alliance in rescuing a former smuggler who really had little achievements outside of the Battle of Yavin at that point, but think about how his father would have faced Jabba. It would have been much different. Granted, Luke was never as strong as Anakin in the movies. Anakin was much more polished and stronger with the Force.

Maybe Luke wasn't much of a leader yet. Maybe everyone piled in their ideas and did what they wanted to do. Then when he realized no one else's plan worked, Luke walked into Jabba's palace and rescued everyone. Although the placement of the droids before Leia and Chewbacca does sort of counter that theory. Unless Artoo did in fact play "the wrong message".

Although, what if Jabba had traded the carbonite slab for the droids? Droids would have been much easier to rescue. They could have easily snuck themselves out. Not that hard. C-3P0 and R2-D2 had been in worse predicaments.

Maybe the Jedi are indeed incompetent.
Posted by Jordi at 9:14 PM No comments:

My new labor of love

It's been awfully quiet here lately. Tragically quiet. One might think I am trying to commit blog suicide. I swear I am not.

The reason this blog has been so barren of late is because I started a new online endeavor. I bought a new site domain and everything. And since February 1st, I've posted over 40 times there.

So I've been writing. A lot. And doing quite a bit of math and statistical analysis there as well. The type of stuff that just doesn't jive over here.

So far, Tampa Bay Baseball Market has been a success. I have gotten a lot of positive feedback by some really smart people. People are digging my deep-dive into the wonderful and wacky world of the Tampa Bay Rays attendance. Of course there are some who think I will find some magic panacea for why plagues the Rays attendance. There are not going to be happy.

There is no magic bullet theory.

What plagues Rays attendance is a lot of little things - from location of the park to who they are playing to day of the week to traffic to many other things. The whole thing is a paradox folded in a conundrum squashed in a dilemma. It's not easy and it is requiring a lot of work.

Hence I haven't been here filling these pages with witty banter.

In other news, I am starting to write query letters to get my first fiction book out published. I need to get that done. The book has been sitting semi-complete for too long. And I think people will enjoy it.

Add that to the list of things I am doing. Along with school (finance kicked my butt!), looking for a job, and other creative endeavors. I need to get comedy on that list as well. I miss going to the Tampa Improv for open mics. I miss writing creatively, shooting for humor on occasion.

Never fear, dear long time reader, I will have more posts soon. This month will not set the record for fewest posts. Even if it is a link dump of stuff I find interesting, you will get something here.

I promise.
Posted by Jordi at 6:45 PM No comments:

Email ThisBlogThis!Share to TwitterShare to FacebookShare to Pinterest
Labels: Baseball

The Origins of Jordi Scrubbings and his Afro 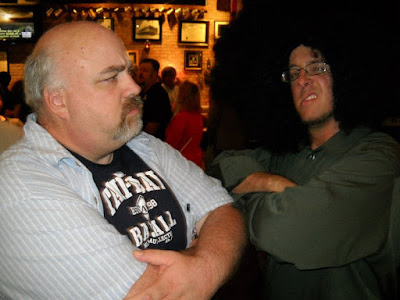 Ever wonder how I came up with the name Jordi Scrubbings?

Ever wonder why I wear an afro?

Buddy of the Blog Clark Brooks wondered that as well. And Clark did something about it. He invited me on to his podcast, The Ridiculously Inconsistent Podcast, which oddly enough has been ridiculously consistent since it began in January. But that's Clark's irony, right there. Who else would say his podcast and blog for that matter are inconsistent, yet post on both regularly?

Seems he should celebrate his consistency, not his inconsistency. Well, at least he is ridiculous. That is true.

I am not so sure about the trickle. Clark is a bit older than I am, but his trickling is a personal issue I am not sure I want to talk to him about.

But back to the podcast!

Clark had me on his podcast (did I mention that already?). It was the first podcast I have been on in a while and it was the first I have ever been on in person. Clark has a radio-like set-up and it's quite snazzy. And he is sponsored! Which means he may or may not be making money on the deal.

Too bad I don't have an appearance fee.

But anyway, I was on Clark's podcast. We talked the origin of the name "Jordi Scrubbings", why I wear an afro, my recent lack of comedy, my worst comedy performance ever, my new blog, my current blog, baseball, and how years ago I got really sick after a night of drinking.

It was a great time.

You can find the podcast on itunes by clicking the underlined letters, under the name

Did I mention Clark is older than me? I think that's why he thinks he can call me "kid".

Hopefully, maybe, one day, if the planets align correctly, and the sun shines right, perhaps Clark will have me back.
Posted by Jordi at 6:22 PM No comments: