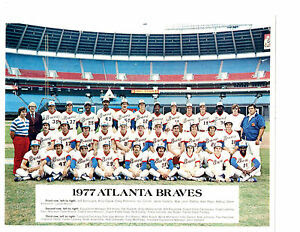 Earlier this year, in approximately March or so, Jay Busbee and I decided on a friendly wager on who would win the season series: my New York Mets or his beloved Atlanta Braves.  After much deliberating, we decided that while the winner would get to gloat all off-season, the loser had to write about their favorite roster in the winning team’s history.  As luck, or as I like to call it “the Mets utter ineptitude”, would have it, the two teams tied 9 to 9.  So in lieu of counting stats and breaking it down to the knitty-gritty, we decided to both write.

I’ll be honest, before the Braves became an NL East powerhouse, I never paid them much attention.  Growing up in New York in the 1980s, the Braves were an afterthought, a minor speedbump on the road to further Mets glory.  Before the days of David Justice, Ron Gant, and John Smoltz, the only time I had any feelings towards the Braves was when Lonnie Smith hit a game-winning home run against Sid Fernandez sometime in 1989.  Fernandez was a personal favorite of mine and I was quite mad at this last-place Brave outfielder for standing in the way of my favorite team.  But I digress.  As for my favorite Braves team, for the sake of colorfulness and sheer ineptitude, I am going with the 1977 Atlanta Braves.

Besides being the year I was born, the year of the Son of Sam, the year Interpol made it illegal to copy video tapes, and the year the Bronx supposedly burned, 1977 marked one of the lowest points in Atlanta Braves history.  Gone were Hank Aaron, Dave Johnson, Ralph Garr, and Dusty Baker.  In their place were Jeff Burroughs, Willie Montanez, Gary Mathews, and a position-less youngster named Dale Murphy.  Add in a new charismatic owner and his penchant for hands-on management, a knuckleballer who won 16 yet lost 20, and the legendary Biff Pocoroba, and the 1977 Braves were one of the worst teams the city of Atlanta has ever seen, and that includes some bad Hawks basketball.

Leading the charge for these bumbling Braves was manager Dave Bristol.  Bristol would manage 160 of 162 games in 1977, making way for the first Bobby Cox era in 1978.  Of course, thanks to new owner Ted Turner, the Braves made headlines on one of Bristol’s “days off”.  Turner, eager to show his baseball prowess, took the reigns of the team on May 11th, promptly losing to the Pirates 2 to 1.  Although he would go on to claim that "Managing isn't that difficult, you just have to score more runs than the other guy", it would be the last day Turner would venture into the daily on-the-field management of the club.

As much of a mess as they were in the dugout, the Braves were as much a mess between the lines, and probably nowhere more so than on the mound.  The so-called ace of the staff was future Hall-of-Famer Phil Niekro.  Although Niekro pitched for the Braves from 1964 to 1983, 1977 was by far his worst year.  In 1977, Niekro gave up over 300 hits and walked a whopping 164 batters.  Rounding out the staff was a gaggle of has-beens and never-weres including one-time 20-game winner Andy Messersmith and one-time NL ERA leader Buzz Capra.

Although the aforementioned Burroughs had one of his better years and was clearly team MVP, my favorite Brave on the 1977 team is shortstop Pat “Don’t call me pocket” (can I say that?) Rockett.  I could be wrong, so long-time Braves fans please help me out, but by his stats, Rockett seemed like he epitomized the light-hitting, slick-fielding shortstops of the era.  Sort of a Rafael Belliard of his day.  Except for one glaring problem – Rockett wasn’t very good with the glove.  Although he only played in 84 games, Rockett was perhaps the worst fielding shortstop in the National League in 1977, committing 23 errors.  His 1 error per 3.65 games was second worst in the league behind stone-handed Padre shortstop Bill Almon and his horrendous 41 errors.  Whereas the Padres moved Almon to third the following season, Rockett wasn’t so fortunate, playing his the final 55 games of his career in ’78 and hitting an unmistakably pathetic .141.

Without a doubt, the 1977 Braves were a mess.  Similar to today’s Giants, they were a team in transition.  Young prospects Dale Murphy and Bob Horner would emerge the following season as stars, and after a few more years of struggle, the Braves would finish in first in ’82 and second in ’83 and ‘84.  Unfortunately however, their success was short-lived, and the Braves turned into the eventual doormat of the NL West.  Yet no matter how bad they were throughout the 80s, no other Atlanta Brave team featured a Rockett, a knuckleballer, and an owner gutsy enough to think he could manage.  That’s why, as a Mets fan and a fan of eccentric personalities everywhere, the ’77 team is my favorite Braves team.
Posted by Jordi at 6:49 PM No comments:

Counting down the best of death

If you've read The Serious Tip since back in the day (March to be exact), you might know I have an unusual fascination with extreme heavy metal. The most fringe of the rock/metal genre has piqued my interest for quite some time. To be honest, I am not sure why these bands interest me. Perhaps it's their appearance, their defiance of death and their embracing of dark, or maybe I just think they are an amazing anti-establishment sub-culture as evident by their creative names and over-the-top lyrics and theatrics. Upon investigation, one might even be drawn to question their "realness", similar to the "studio gangstas" in hip-hop culture.

Anyway, before I start to babble on about the socio-economic-religious impact of extreme heavy metal on global culture, HailMetal.com put together a list of the best death metal albums of all-time. I definitely recommend taking a look, if only for the artwork and the creative monikering.

Before I give you the link however, I would like to share a couple of my favorites and my own commentary: 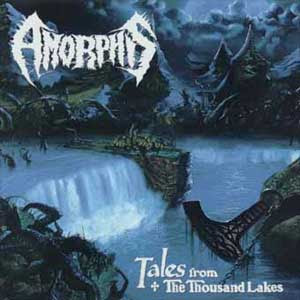 Hmmm ... "Amorphis". Doesn't "amor" means love? And "phis" is, of course, more than one "Phi" - possibly short for Phi Mu, or any other Greek organization. So if I have this right, the translation of this mega-power in death metal means "Love Phis". 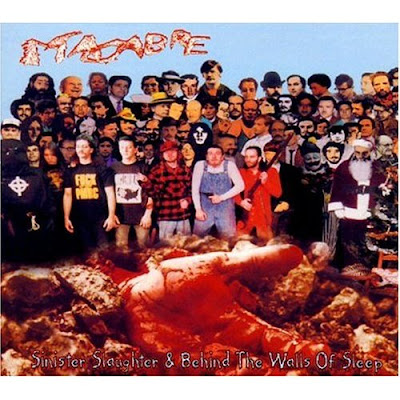 Yeah, you see that right. The cover of Macabre's death metal magnum opus Sinister Slaughter is a mock of The Beatles's Sgt. Pepper album, only depicting mass murderers and other assorted deranged psychopaths. What else would you expect from a band with songs named "Ted Ted Bundy Song" and "Nightstalker Richard Ramirez"? My only question is, is music about killing people considered "snuff rock"? Not to be confused, of course, with the "Snuffy Rock" they play on Sesame Street.

Ok, those are my favorites. Do I own either of these? No. Could I understand what the singers were saying/screaming/bellowing without looking at the lyrics? Probably not. But, I'll give them credit, they are creative. In their own special way.

As for the rest, they can be found here: Hail Metal.com's Best of Death.
Posted by Jordi at 9:04 PM No comments: 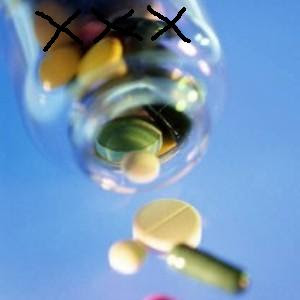 Recent supplement raids across the U.S. have intercepted numerous cases of erectile dysfunction drugs addressed to pornography stars and caused uproar throughout the adult film industry.

FBI sources have told The Serious Tip shipment lists on over 69,000 cases of ED drugs seized since February 2007 contained the names of numerous high-profile male adult performers. The most recent of these raids netted approximately 2,500 cases in Brooklyn, NY. Other raids have seized drugs in Miami, Fla., San Francisco, Ca., and Salt Lake City, Utah. Many of these raids, such as the recent NY seizure, made headlines due to their seizure of huge amounts of human growth hormone and other sports-related drugs.

According to FBI sources, the drugs are generic versions of name-brand ED drugs such as Viagra and Cialis. Many are manufactured in poor third-world countries by children with no shoes and women who haven't showered recently.

“I was clean my whole career,” said Longfellow. “Now I have to question these new guys. I mean, as some of them get closer and closer to the all-time records, how do we know if they were natural?” 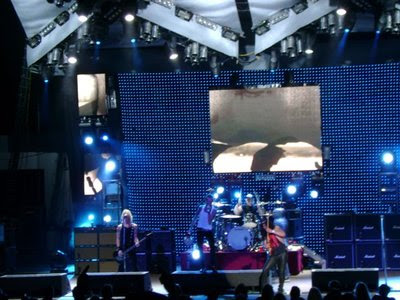 I wanted to post this over the weekend, but my previously mentioned ISP problems made doing so impossible. Anyway, last Saturday I got to check off a major goal in my concert going career. I saw Alice in Chains open for Velvet Revolver at the Ford Amphitheater in Tampa. Granted, Velvet Revolver was the headliner and they put on an absolutely great show, but I have wanted to see Alice in Chains in concert since I became a fan in the mid-1990s.

- When I bought the ticket, the guy at the ticket place told me new lead singer William Duvall sang just like late frontman Layne Staley. I'll admit I was a bit skeptical, but Duvall nailed it. Very impressive.

- The set list was nothing new, which also kinda surprised me. I thought perhaps they would slide a new tune in or perhaps a song from one of guitarist Jerry Cantrell's albums. Instead I got a heaping helping of classic Alice in Chains. And there is nothing wrong with that.

- Most of the songs came off of Dirt and the self-titled album, except "No Excuses" from the Jar of Flies album and "We Die Young" and "Man in the Box" from their first album, Facelift.

- As I watched the show, I started thinking, what is Alice in Chains' most famous song? "Would?" was probably their first major hit, and "Rooster" is definitely up there, but I would almost have to go with "Man in the Box". It gets plenty of radio play still, and has been used in a bunch of movies and at sporting events. Opinions welcome in the comments, of course.

- Speaking of "Rooster", the band closed by playing the song while showing an awesome montage of war footage that spliced scenes of troops in Vietnam with scenes from the current conflict in Iraq. Flashing throughout the footage were pictures of Richard Nixon, Lyndon Johnson, Donald Rumsfeld, Dick Cheney, and President Bush. While definitely not at the level of a U2 Bono statement, AIC's video did a good job of putting geopolitics aside and showing the traumas, stresses, and similarities of two wars generations apart.

A few notes about Velvet Revolver:

- I've never seen Slash perform live before and I was blown away. His guitar playing skills were better than I thought.

- Unlike Alice in Chains, Velvet Revolver mixed some other material into their set, playing songs from their members' former bands, Stone Temple Pilots and Guns'N'Roses. Of course, these songs drove everyone in the crowd wild.

- I was really surprised they played the Guns'N'Roses tune "Mr. Brownstone", however. If memory serves me correct, the Virginia Tech killer wrote an essay with the same name and quoted the song quite extensively. Here it is. I thought maybe the band would have retired the song in tribute to the victims.

Overall, I would give this show a solid “A”. The 60 dollar ticket and the fact that the ushers did not let people take pictures (supposedly at the artists’ request) was the only reason it doesn’t get an “A+”. Highly recommended.