The Story of Alien Chili 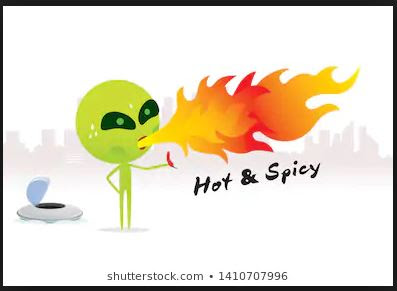 A few years ago, I worked with someone who claimed to be decended from the infamous Donner Party. According to my co-worker, whereas part of the party turned to cannibalism, another part of the party created a type of bean-less chili to sustain themselves on their travels. My co-worker submitted this long-kept family chili recipe every year in our office chili cook-off.

One year, using a news report that an group of ancient aliens from Africa knew of a distant star in the Sirius star system, I decided to create my own chili legend. My co-worker got the joke, although most others didn't. He laughed, and that's what was important.

Here is the legend behind Dogan Traveler Chili. I don't remember the recipe, so unfortunately this legendary chili will never be made again. Unless the Sirius aliens return.

About a month and a half ago, a group of beings from the Sirius star system visited the Dogan tribe of Mali. These travelers had planned on disguising themselves as members of the tribe, integrating into the culture, and learning about life on Earth.

Unfortunately, the travelers faced numerous difficulties. First of all, they stood nine feet tall, making blending in with a group of humans very difficult. Second, they could not communicate verbally. Because the travelers communicated among themselves via ESP, their vocal abilities had been neglected and were unable of being used. Third, they ate three times the amount of normal human beings, which tragically disrupted the Dogan's delicate food allotment.

After only two days, the Dogans became frustrated with their new guests. Many Dogan people, even those who at first welcomed the beings, began withholding food and treating the travelers with hostility.

Eventually, fights broke out and several alien beings were killed. Knowing their time on Earth was limited and they must make haste of else suffer at the hands of the angry Dogans, the remaining travelers attempted to leave Earth. Their plans failed, however, when they learned their ship had become disabled in the landing. So they did what any self-respecting space traveler would do: they offered to cook for the Dogan tribe.

As could be expected, the culinary skills of the travelers was limited. The only food they know how to make was an intergalactic peace chili traditionally made by the inhabitants of their star system. So the travelers cooked as good a chili as they had ever made before. The Dogan tribe had never had such a good tasting chili. After they were finished, the Dogan tribe invited the travelers to stay for as long as they live. Unbeknownst to the Dogans, inhabitants of the Sirius star system live over 800 Earth years. 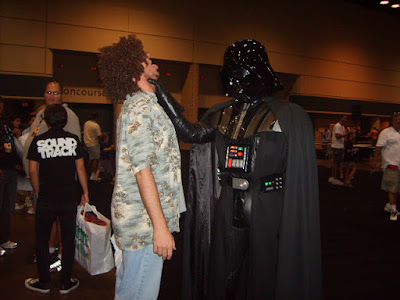 Those who know me or read this blog regularly know I am a big Star Wars fan. I wouldn't say "huge", but definitely "big". I watch the movies regularly, drop Star Wars quotes when I can, read Star Wars books when the fancy strikes me, and have always kept a Yoda Pizza Hut Magic 8-ball figure by my work computer at different jobs over the last six years.

Born in 1977, I was raised on Star Wars. The phenomenon started being a big part of my life when I was knee-high to a Jawa. According to my folks, Empire Strikes Back was among one of the first movies I ever attended. Then my father took me to see Return of the Jedi opening day.

All through junior high, high school, and my four years in the military I suppressed my Star Wars fandom for what could only be called "the sake of fitting in". Like most people who struggle with social acceptance in junior high and high school, I definitely didn't want to be an outcast. In the military, with it's alpha-male heirarchy, sci-movie geekdom is not looked highly upon - although I did hang with some folks who were fans and we did wait in line for three hours to see Episode 1 the night it opened.

In total, outside of seeing the releases and the sequels and reading Shadows of the Empire, I did very, very little to advance my fandom of Star Wars from the age of 14 to my mid-20s. I passed myself as a "normal" fan and suppressed my affection for something I grew up with. Sports and music were much more acceptable and I liked sports and music, so sports and music it was.

In my late 20s, not long after Episode 3 came out, I started to open up to Star Wars again. That's when I began committing my entire weekend to watching Star Wars marathons on Spike and read Vector Prime, the first book to kill off a major Star Wars character. That's also when when I dove back into the Extended Universe and started spending more and more time on Wookieepedia, filling in the gaps in situations and characters that developed in the 10 or so years I was out of the loop.

About this time I also started reading a lot of blogs and other non-professional, independent internet writing. I realized there were a lot of people like me. People who liked sports and Star Wars and music and let all their interests mutually co-exist in their lives. People who also dropped Star Wars references in their writing as they, like me, had been influenced creatively by the mind of George Lucas. People like Jason Fry, blogger at one of my favorite blogs "Fear and Faith in Flushing", a Mets blog heavy on writing and fan perspective and a huge influence on my work at Rays Index.

As I was rediscovering what I loved as a kid, the world was becoming cool with geek culture. While shows such as "Big Bang Theory" showed nerds in a semi-positive light (I think I have seen only two episodes ever), websites and popular internet memes based on geek culture grew in popularity. As did the development of online communities where more and more people started talking about their fandom. By the end of the 2000s, "geek", "nerd", and "dork" lost their negative connotation and were usurped by the very people formerly derogatorily described as such. Maybe it was a coincidence, maybe society's acceptance pushed me along, or maybe both were gaining the confidence to say "This is what I like. If you don't like it, I don't care."

The culmination of my Star Wars revival occurred in 2010 when I went to Star Wars Celebration V in Orlando. Although I was excited to go, I was a little intimidated upon arriving at the Orange County Convention Center. Again, my fear of being lumped in with "the geeks" and the "socially awkward uber-fans" played tricks on my subconscious. I told myself I was going to check out the convention and observe the fans and that was all. I was an observer, an admirer, but not really part of the community. I didn't think I wanted to be.

As I wrote in my blog post describing the convention, I had a great time, despite my initial preconceptions. The people there weren't geeks. They were people just like me. People of all ages, races, creeds, colors, species, and planetary systems who had an admiration for Star Wars in some way, shape, or form. Although I was still slightly behind in my knowledge of the entire Star Wars timeline, there was no barrier of wisdom for enjoying the convention. As there were probably people there who had read every book and seen every movie and cartoon, there were probably people there who had only seen the movies. Maybe even less than that. I figured I was probably right around average.

I was an average Star Wars fan.

Also I mentioned in my blog post, my day at the convention ended by seeing Empire Strikes Back and Return of the Jedi with hundreds of other fans. The viewing might have been normal for regular convention goers, but for me it was an awakening. There I was, surrounded by other people who knew these movies and watched them just as I had for over 20 years. After the movies were over, I knew there was no doubt I was part of the Star Wars fan community.

These days, my Pizza Hut Magic 8-Ball Yoda still sits by my work computer screen; I have Jason Fry's latest book sitting on my desk, waiting to be opened; I recently had fellow Rays fans send me a Rays commemorative Star Wars Day shirt;  I am sleeping on old school Star Wars sheets; and I couldn't resist buying an incredibly interesting looking Star Wars bootleg DVD set. I've accepted the fact that I am a Star Wars geek/nerd/uber-fan, even it means taking guff from the still-alpha-male dominated, non-nerd military culture I am working with here in Afghanistan.

Meanwhile, for the rest of the world, Star Wars fans are no longer considered geeks and outcasts and nerds and whatever other insults the "in-crowd" used to throw their way. It is acceptable to be a Star Wars fan as Star Wars is more popular than ever. And as new fans enter the fold, I am proud to say I saw most of the movies opening day/night, own several copies of each movie, have a book shelf of full of Star Wars novels, I've been to a Star Wars convention, and I am a Star Wars fan.
Posted by Jordi at 12:20 AM No comments: 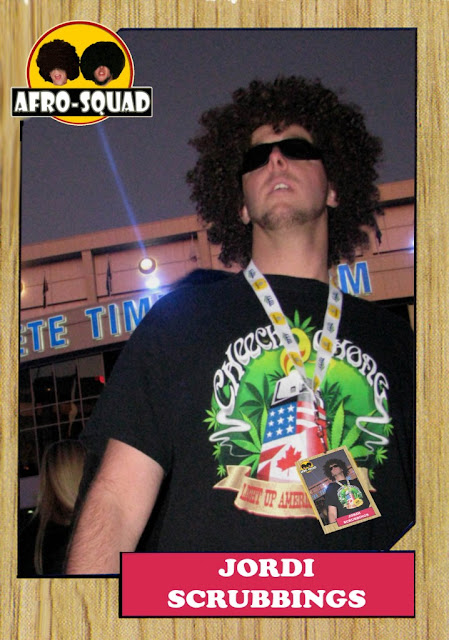 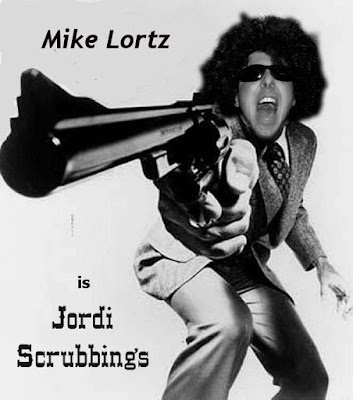 This week I am featuring several humorous photoshops created by the world-famous Snowman of the Afro-Squad. Snowman has been doing these pictures for years and I have been fortunate to be his subject of photoshop on a few occasions. The next few days will feature some of my favorites.
Posted by Jordi at 5:28 AM No comments: 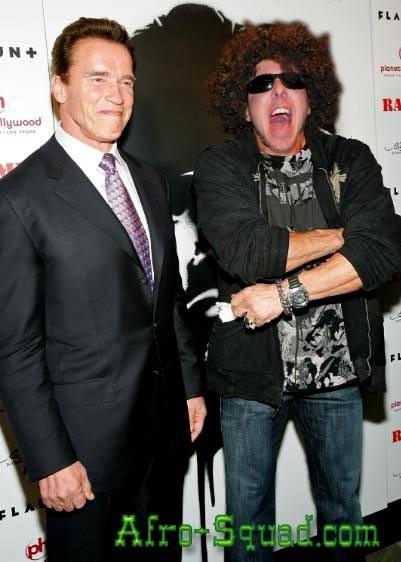 This week I am going to feature several humorous photoshops created by the world-famous Snowman of the Afro-Squad. Snowman has been doing these pictures for years and I have been fortunate to be his subject of photoshop on a few occasions. The next few days will feature some of my favorites.
Posted by Jordi at 5:08 AM No comments: 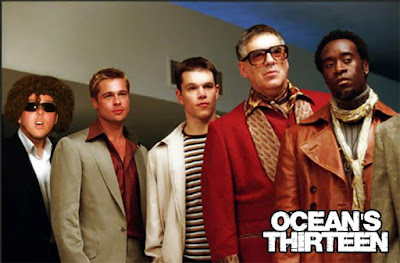 This week I am featuring several humorous photoshops created by the world-famous Snowman of the Afro-Squad. Snowman has been doing these pictures for years and I have been fortunate to be his subject of photoshop on a few occasions. The next few days will feature some of my favorites.
Posted by Jordi at 4:58 AM No comments: 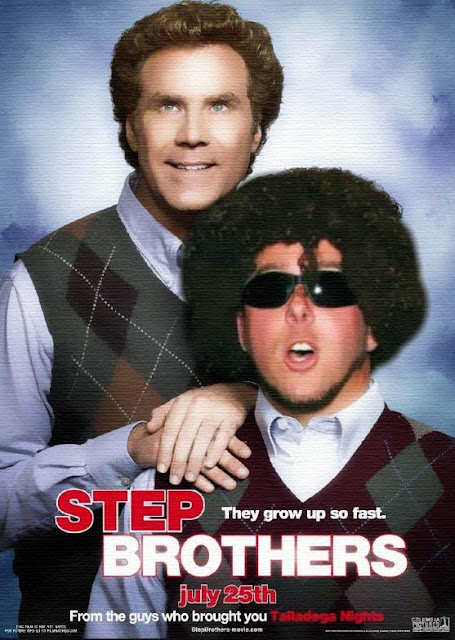 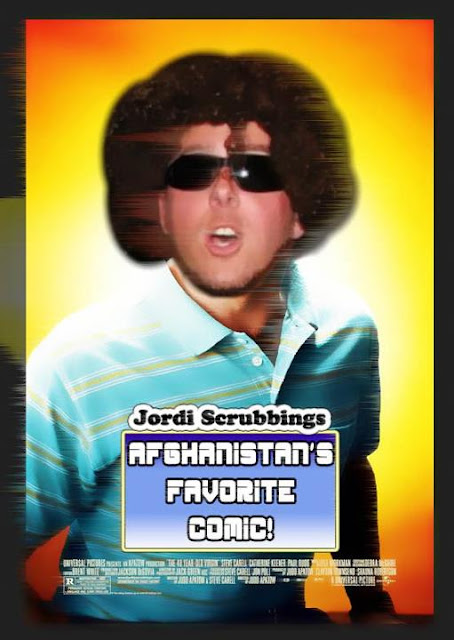