Although far from a stereotypical metalhead, I am a fan of various types of music and music cultures to include many hard rock and mainstream metal bands. My interest in this type of music has led me to be fascinated by the names, images, and descriptions of the denizens of hard, fast, heavy, often unintelligible metal. Earlier this week, I found a web site that not only piqued my interest, but actually took from time normally spent at work perusing sports blogs.

Encyclopaedia Metallum is the wikipedia of metal bands, relying on user entries to become the one-stop-shop for all persons metal. The web site divides its entries in three distinct categories: bands by letter, bands by country, and bands by genre. Of course, it has all the mainstream performers such as Metallica, Black Sabbath, and Deep Purple, and the usual categories such as heavy/traditional and speed metal. But it is the depths of triviality that makes the Encyclopedia Metallum so enthralling. Did you know there are metal bands that specialize in German Viking mythology? What about bands who write songs about animals killing people or dentistry?

So in honor of the weird, odd, and demented throughout the Encyclopedia Metallum, here are my personal five favorite entries. 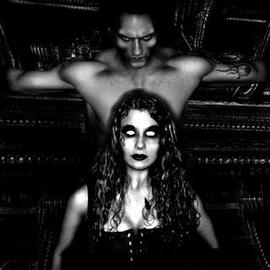 2) Nembrionic Hammerdeath - Although they have changed their name to just "Nembrionic", Nembrionic Hammerdeath are still banging out the tunes. According to their web site, "after years of being in the underground, Nembrionic still has no ambition to get rich, famous and more of this bullshit ... In 1998 Nembrionic has proven to be on the top of the death metal list with their new opus 'Incomplete'; pure brilliance, which leaves no doubt about their musicianship and songwriting qualties. Their one of the best around." Still tough to figure what a nembrionic hammerdeath is though.

3) Abwhore - No, it is not a person that only works abdominals at the gym. Abwhore is a "blackened gothic metal band" from Atlanta. By the way, how can a band be blackened? Are they fish or chicken? Dumb name, dumb description. 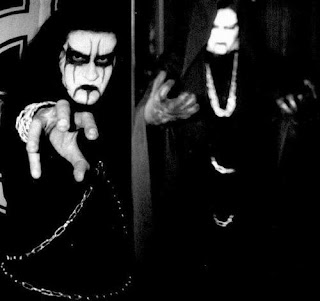 4) Godwaffle - Most metal bands that have "God" in their name are usually something demonic or evil sounding like GodDead or GodKills or NoGod or something like that. Godwaffle? Are you kidding? According to the band's myspace page, they are the Chuck Norris of metal, with such tidbits of insight such as "Godwaffle kidnap babies to raise for the ultimate battle between Heaven and Godwaffle" and "Godwaffle shot Hemmingway in the f**king face". The web site gets weirder, claiming Godwaffle's drummer was murdered by the lead singer and the guitarist, who then framed the bassist for the crime. While the bassist serves life in prison, the two actual culprits are rumored to be successful daycare owners hiding somewhere near Idaho. Ummm, I really don't know what else to say ... moving on ... 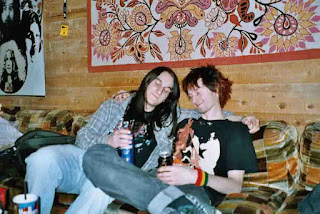 An FSU Fan Experience at the 2007 ACC Tournament 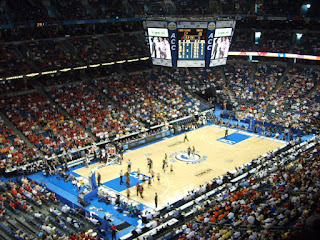 Living 20 minutes from the St. Pete Times Forum has its advantages. For one, whenever there is a Lightning home game, my drive home from work gets infested with a buttload of Lightning fan traffic. Nothing beats getting stuck in traffic. There are also numerous country music acts that arrive throughout the year. From Tim McGraw, to Faith Hill, to Conway Twitty, to whomever else, they all seem to pass through Tampa, filling the roads with radio station vans, random fans, roadies, groupies, and other assorted potential roadkill. Please remind me, how many points is it to run over a boot-scootin' urban cowboy?

But this week the St. Pete Times Forum finally earns its keep and plays host to its biggest group of guests since Motley Crue. This week the ACC Tournament ventures out of its traditional home in the Carolinas and makes its way to beautiful sunny Tampa. And since I first saw the banner advertising the tournament last May, I vowed to be there.

Unfortunately, in the months and days leading up to the Tournament, I had become dismayed by the lack of availability of tickets. Apparently, the ACC hasn't had a public sale of tickets since the 1960s. Tickets are issued to the universities, which then issue them to the biggest boosters (read: rich, old, white men). So where is the average fan? Left to buy tickets from seedy scalpers. Fortunately, there were quite a few not-so-shady people outside the forum selling tickets to the games they were not interested in attending. Makes sense, I guess. If you were a Virginia fan, for example, why waste time watching Florida State and Clemson battle it out when you could take the cash, drive across town, go to Busch Gardens, and ride roller coasters all day?

(By the way, I know they are an integral part of the college fund-raising process, but I cannot abide boosters. Disgusting creatures. I can't stand their team logo polo shirts, their team logo golf hats, and their pretentious attitudes because they can donate thousands of dollars a year to my alma mater. And I absolutely hate how they swing their power around like Dirk Diggler to get their way with the university (think Jeff Bowden). F*^# boosters.)

After dropping 20 on parking and another 80 on a ticket (I know, I got ripped off), and with still an hour to waste until tip-off, I headed towards the ACC Fan Fest. This was the usual corporate interactive smorgasbord of free throw contests, credit card t-shirts, and goodie bag give-aways. Eh. Nothing special.

On the subject of things that didn't quite blow my socks off, after searching high and higher, I found my seat among the bats and cobwebs of the St. Pete Times Forum's extreme upper deck. Considering I spent 100 dollars already, I probably should have spent the additional cash and sprung for an oxygen tank. The air was mighty thin in the belfry. 80 bucks for this? Whatever. Only real fans sit in the nosebleed seats. And people looking for a place to anonymously get some lovin'.

Another random note about fans: maybe I am just being negative, but nothing says bandwagon basketball fan like a guy wearing a university's football jersey to a basketball game. Even the polo shirt wearing boosters have more sense than that. How about wearing an FSU basketball shirt, buddy? You know they do make them. You can even get one for free if you go to some home basketball games. Hell, that's how I acquired half my wardrobe. But I digress ...

Florida State came into this game absolutely needing a win. They had lost to Clemson twice this year, both on the road and in Tallahassee. And being one of the many bubble teams hoping to play in the NCAA Tournament, they could ill-afford to make a quick exit from their conference tournament.

Oddly, FSU Coach Leonard Hamilton chose not to start normally-starting point guard Toney Douglas, instead opting for backup Ralph Mims. I can not emphasize enough how much better the offense plays with Douglas on the court. Without him, they stand around and wait for Al Thornton to do something spectacular. Douglas drives, dishes, swings passes from one side of the perimeter to the other, and just makes the offense much more fluid and effective.

The beginning of the game was pretty rough. Neither team seemed to be shooting well. Maybe it was the facility, as even during warm-ups the St. Pete Times Forum rims seemed unforgiving. Thornton, like all other scorers in the game, started off slow, although he eventually warmed up enough to lead all players with 18 at the half. One of my biggest fears is now that Al Thorton has reached "superstar" status, will the other Seminoles cede too much of the offense to him? Will other player be more apt to think Thornton will lead them to victory so they will give less effort on the offensive side? I hope not.

Despite the offensive ineptitude, FSU led 38-36 at the half. Unfortunately, as I only had 1 dollar in my wallet, my halftime experience consisted of sitting around and watching the amazingly beautiful, somehow nationally-ranked FSU Golden Girl dancers. Oh, how I wish Bea Arthur and Betty White could shake it like that. Give Golden Girls a whole new meaning. By the way, I remember when FSU used to bring in halftime acts like trampoline guys and guys who did flips across the court. What ever happened to them? Anyway, that was halftime.

The second half mirrored the first as neither team went on any type of scoring run to put the other away. FSU's Douglas, who actually played a majority of the game despite not starting, seemed reluctant to score, and rarely took the ball up whenever he drove into the lane, instead opting to pass. Not a bad strategy as the defense usually clamps down to prevent the lay-up, but putting the ball up once in a while might be good, you know, to change up the routine. Maybe he was afraid of getting re-injured.

And re-injured he almost was, falling hard after tripping on a Clemson player with 6 minutes left in the game. Much to the collective joy of the FSU fans, Douglas either played hurt or was alright, returning to the floor 14 seconds later.

With the game winding down and with the score 66-66 and 35 seconds on the clock, FSU attempted to inbound the ball for the score and the win. This should have been easy, set a screen, get Thornton open, and watch him win the game for you. Unfortunately, the only man able to get open was freshman Ryan Reid, who has an effective shooting range of about 2 feet. Reid, standing beyond 2 feet from the basket, couldn't get the job done and Clemson drove down the court only to turn the ball over, and giving the Noles one last chance for the win with 8.3 on the clock.

This time the Noles were able to get the ball to Thornton, who then attempted a crazy fall-away-from-three-defenders shot. Luckily for FSU fans, and much to the dismay of Clemson fans, the refs called a foul, sending Thornton to the line with 1.5 seconds remaining in the game. Who better? Who else? Bill Simmons, I hope you were watching. What's the saying, "big time players make big time plays in big time situations"? Well, it was Al Thornton's time.

Thornton made one of two free throws, which was enough, as Clemson failed to make their last-second hail mary attempt. Final score FSU 67 - Clemson 66. Next up: North Carolina.

No one said this would be easy.

As for me, although I would love to go to one more game, I don't think I am going to spend another 80 bucks on nosebleed seats. I think I am going watch the game in the comfort of my local Hooters.