False Facts of a Monkey Movie

Nearly every high school and college teacher tells their students not to rely on Wikipedia.

"Anyone can update it," they preach.

Most never see an erroneous Wiki entry as even the slightest error is usually quickly corrected by magical wiki elves that live in Maine and spend all their time monitoring the vast expanse of the Wiki Kingdom. They are a diligent group who hardly ever let anything slip past, lest they be beaten by their Illuminati overlords.

Back in December 2012, however, I found the above pic.

Days later, it was deleted.

This couldn't be true, could it? One of the most highly acclaimed sports heroes of the 2000s wasn't actually on steroids, was he?

Email ThisBlogThis!Share to TwitterShare to FacebookShare to Pinterest
Labels: Comedy, Links, Other Sports 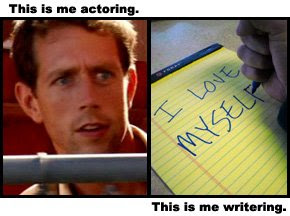 Many moons ago, I would interview people I thought were interesting or who I took some creative influence from. I haven't really done much of that lately, but after reading writer/filmmaker Brian Spaeth's latest book "Flight of a Super Airplane", I figured I would drop him a line and ask him a few questions on writing, filmmaking, and his thoughts on the creative process.

Me: So what’s new? What are you working on these days?

Brian: Currently am in post-production (mostly editing at this point) on A Cleveland in the Rye, a full-length feature we shot mostly in December. There was a pick-up day just last week, and one more day to shoot in June, most likely.


It’s about an inept documentary filmmaker who’s following self-dubbed action lawyer James Cleveland as he tries to find the 7 kidnapped daughters of a prominent Senator inside an abandoned bank.


I also have a (LeBron-centric) book about sports apathy that could possibly come out this summer, and another that uses my Twitter archive to tell the story of a struggling college drop-out trying to make a splash in the tech startup world.


Me: I recently finished your second book in the Super Airplane saga. How would you say it differs from the first?


Brian: I’d say it largely knew what it wanted to be - at least in terms of plot - right from the start, whereas the first didn’t really have a plot until about halfway through, when I realized there was a plot I could attached to the randomness.


That’s the biggest thing - other than that, there are some nixed characters and other details. Flight spends quite a bit of time in the text wondering whether it’s serving as a proper sequel to Prelude or not, so I’d rather not say more than that, since this wise question of yours is indeed answered inside the book.


Me: The second book ends on a cliffhanger. Will there definitely be a third book? If so, when might readers expect it?


Brian: Yes, definitely will be a third. The story and character arcs are all laid out in my head, and I’ve put some segments down on virtual paper, but I don’t see actually being able to sit down and write this until later this year or early next. The soonest anyone will see Dawn of a Super Airplane is sometime in 2014, unfortunately. I’m actually a huge fan of this series, and really want to read the next one.


Me: Will the third book be the last in the Super Airplane Saga? Or will it continue?


Brian: Will absolutely continue until the story is finished. Flight said it would be six books long, although Prelude claimed five. We’ll see.


Me: You have also put out a movie and have worked on other film projects. Why write books? Which do you find more rewarding: the filmmaking or the writing?


Brian: I go back and forth, but since the rise of the ebook and self-pubbing becoming legit, I am really leaning toward books. There’s more control, you can get more product out in a shorter time, and there no need for gut-wrenching stuff like fund-raising, etc.


I think my filmmaking itches - which are definitely there - will be scratched on YouTube via shorts and such after Rye. My true loves are ideas, and the creative process, and storytelling, and I can do that more often writing books. I’m also fascinated with the economics of indie publishing, and I’d like to be able to devote more time and thought and experimentation to it.


There’s a lot of technical aspects to filmmaking that I just don’t have that love for. I like it, but I’m not one of those people who could be shooting all the time. It becomes tedious for me. (I love it in spurts, but it becomes tedious. And it takes forever.)


Me: What is your writing process, especially with the Super Airplane books? With the abundance of characters and interweaving storylines, how do you keep the story straight when writing?


Brian: It’s kind of different every time. I generally have an idea where I’m going with something, but what usually happens is I’ll just kind of garbage something out until a certain something “clicks”. Sometimes it’s a scene or a line of dialog or who-knows-what, but when it happens, suddenly the picture for the rest of the piece is there in my head.


I see now that I didn’t answer your question, but I guess I’m saying I don’t overthink it - it just kind of creates itself. I of course have checkpoints and things I know need to happen, but I try to make it as organic as possible.


For example, when I killed off Mujukee’s wife in Prelude, it literally wasn’t conceived until it came through the keyboard from my finger. I was like, “Whoa whoa whoa, what just happened?”


Me: I am writing my own book, and have finished the rough draft. So asking this as personal advice as well, what is your editing process? Do you have people read the rough drafts? When are you sure it is ready for print?


Brian: I have two people I go to for editing help now. One I’ve used for a long time, the other is more recent, and now considered invaluable. I listen to everything, but I know when it’s ready. I’ve always been capable of being objective about my own stuff. The number of abandoned projects is proof of it.


Brian: All are true, except Brian Spaeth and Brian Spathe are probably closer to the same person than I’d care to admit.


Me: What about Bruce Willis?


Brian: Bruce has big changes happening in his life in the next book that will bring this into question.


Me: Are there any more Brad Radby movies yet to be discovered?


Me: What are you reading/watching these days?


Brian: Hmm...I keep trying to catch up on Justified on Amazon Primal, but don’t seem to find the time. Mad Men, but I don’t really like it. Waiting for Breaking Bad, mostly. I’m watching a lot of documentaries on Netflix to get a feel for different editing styles of them.


Me: Looking back now a few years later, thoughts on the YaySports! blog? Was it an effective medium for gaining a fanbase?


Brian: It definitely was - I still have people ask me to bring it back quite often. I sometimes wonder what would’ve happened if I hadn’t turned into a sports apathist. My blahness about the NBA and sports led to mishandling and sacrificing a lot of the attention, audience, and opportunities that I had back then.


Lots was learned, though, and there’s truly never been a better time to be pursuing creative endeavors.

You can find Brian's website here.
Posted by Jordi at 2:40 AM No comments: