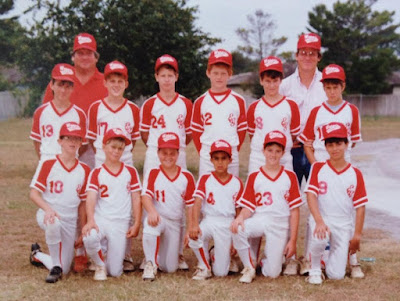 I've often written about my early days on the ballfield. Days where I was the Jamie Moyer of the Eau Gallie Little League - a junk-balling control specialist with a a good change-up and an uncanny ability to locate my league-average fastball. Up and down, in and out, I kept the other 12-year olds off-balance.

Facebook is funny sometimes. Amidst the pics of high school classmates' kids and vacation selfies of still-single friends, sometimes a nugget of memories emerges. Two weeks ago, one of my old little league teammates posted a "Throwback Thursday" pic that took me by surprise.

I played in the Eau Gallie Little League from ages 10 to 14. So this was my second to last year. If I remember right, this team won a few games. I pretty sure I pitched a game or two. I know I played a lot of right field in those days.


These days, my 6-year old nephew plays on the same fields I played on. He's also left-handed. If he stays with the game, I hope he does better than I did.

He already hits a lot better.

(By the way, if you couldn't tell, I'm the kid with the glasses in the left end of the front row.)
Posted by Jordi at 3:02 AM No comments:

My interview in The Daily Bugle

I wasn't going to tell anyone, but I guess the secret is out.

A few years ago, I moonlighted as a taxi driver for a little while. I needed some cash and college was getting expensive. But I wanted it to be a secret and I wanted to stay anonymous. I wanted to be just an average guy doing average things being anonymous. So made a plan to fly to New York and drive a taxi through New York City. New Yorkers paid ok, and I made my money for the spring semester.

You weren't supposed to know. As a matter of fact, there wasn't supposed to be any record that Mike Lortz ever drove a cab anywhere. My taxi license said "Jordi Scrubbings". I wore the small afro wig and told everyone I went to the University of the United States - a small school that doesn't even have a basketball team.

Then Daily Bugle writer Joy Mercado let the cat out of the bag.

One of the biggest problems facing New York City when I was cab driving - besides a dopey superhero in a spider suit - was the construction of an experimental hydroelectric power plant. Supposedly, the plant would "reshape New York's entire power landscape". At least that's what Oscorp, the company building the facility, told everyone. It was right there on the sign in front of the building.

Big words. No one bought it. They all thought the facility was an overpriced monstrosity and there would be a city-destroying catastrophe because of the power plant. There were even people protesting the facility on a daily basis.

During one weekend in New York, I drove a protestor to their segregated "protest spots". After letting her out, another woman stepped into the cab. She noticed the prior passenger's hippie-esque look and protest sign and asked if I knew what the prior passenger was doing. I told her she was going to protest the power plant.

But she insisted I give her a quote and said her article deadline was within the hour. Unfortunately, I have a soft spot for writers, especially attractive blonde ones.

Every super-hero has a weakness, right? That's mine.

So I gave Ms. Mercado her quote.

“What do you want me to say? That this is a bad idea? Oh, you do? Fine. This is a bad idea,” said average New York taxi driver, Mike Lortz when asked his thoughts about the power plant.

I have no idea how she matched "Jordi Scrubbings" with "Mike Lortz", but she did. Notice she called me "average" too. She is a witty one.

Unfortunately, my taxi gig didn't last long after the interview. My boss informed me taxi drivers aren't supposed to give interviews because if one taxi driver became a good source, no one would ride in the other taxis. And everyone would be asking taxi drivers for their opinions. The job of a taxi driver is to get people from point A to point B, he said. No one cares if taxi drivers want to see a rain wash all the scum off the streets. It's not their job to philosophize.

He told me 40 years ago some nutjob developed a conscious, stalked a presidential candidate, and then shot a pimp in order to save a runaway. Since then cab drivers don't give interviews.

So I was fired.

I returned to Tampa and haven't made any money since. But I guess I should be happy. I was quoted by The Daily Bugle.
Posted by Jordi at 9:06 AM No comments:

Since I returned from Afghanistan 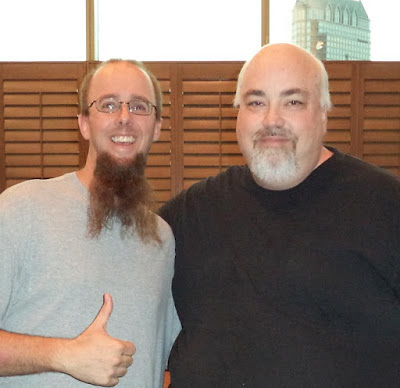 Has it really been that long?

Seems like yesterday I was flying back from London to Miami - 13 hours cramped in an airplane over the Atlantic. I remember I watched "Wreck It Ralph" on the flight. I watched other movies as well, but I don't remember which.

A year and a few months ago, a TSA security guy in Miami gave me a hard time. I had a long beard and a one-way ticket from Afghanistan. He asked what I did over there. I told him I couldn't tell him. He didn't like that.

Then I told him I wanted to get to Orlando to see my family. He finally let me go.

It was over a year ago that my parents and my nephew greeted me with "Welcome Home" balloons, big hugs, and smiles. My nephew grew a lot over the 14 months I was gone. Unsurprisingly, he has continued to grow since I've been back. I'd be more worried if he stopped.

It was over a year ago that I pulled in to the Sea View Motel in Melbourne Beach, Florida. That was the perfect place to bring life back down to the lowest gear. My only regret is that I didn't spend longer there. The owners were great, the room was great, and the view on the beach was phenomenal. I need to go back.

I would like to make an annual trek to the Sea View Motel, at least for a weekend, just to unwind and reflect on everything I accomplish in a year's time. Sort of like a growth chart. Maybe I will go from one night in the cheapest room to a week in the most expensive as the years go on. That would be growth.

The first months after my return, I lived a nomadic existence. One relative called me a "gypsy". I had everything I needed in my trunk. That was of course, after I traded in my pick-up truck of six years. People ask me how I like driving a smaller car as compared to a full size truck.  To be honest, had I not been gone for 14 months the transition would have been more awkward. But as it was, I only drove my truck for two months before trading it in.

I felt good about that deal as well. Which still strikes me as weird. I am so used to getting fleeced by companies and for a car dealer to give me almost exactly the deal I wanted was an accomplishment. I only had to go up $1,000 or so from my low offer, which was about $5,000 off the marked price. So I walked out with a deal and a new car.

After a summer in over a dozen hotels, several weeks at my grandfather's house, and assorted nights and weekends at other friends' and family's homes, I eventually ended up back in Tampa by the University of South Florida. It was finally time to start my MBA.

I moved into a small student-area apartment in August of 2013. I hadn't lived in a place this small since I was an undergrad over 10 years ago. It was a big step back lifestyle-wise, and the furniture and belongings I had prior to leaving remains in storage. But while I was stepping back with my lifestyle ...

I jumped back into school with both feet, taking six classes in the fall. It was my first semester in college since 2005 - almost eight years. Needless to say, I needed to re-learn how to study. But my skills eventually returned. After a few shaky first tests, I made it through my first semester with 2 A's and 4 B's. Not bad. Especially considering I had never even been introduced to some the material before. And here I was learning at the graduate level.

On a related note, maybe I should have taken a few more business classes as an undergrad. The only class I could identity with was Marketing. I did well in that class. Other classes, such as Accounting, caught me by surprise. The material was so new. I don't want to call myself an old dog, but I am no young pup. I was learning new tricks.

After the fall came the spring semester. More classes. This time I took Finance. Finance killed me. I thought Accounting was hard. Finance was impossible. I got my first ever "C" in college. I know for most, that's not a big deal, but I had never gotten a "C". That's my standard. But Finance just murdered me. But more on that some other time.

Now I am finishing up the summer semester. This semester has been chock full of "analysis". I am taking Financial Analysis, Competitive and Business Intelligence, Digital Marketing, and a CitiGroup Seminar course focusing on anti-money laundering processes. I am also taking an online course through EdX on statistics, basic databases, and baseball analysis. So there is definitely overlap in my coursework with things I have done in the past, whether at work or in my personal time.

At the close of this semester, I will be about half way done with my Master's in Business. I have learned a lot. I'm sure how much is common sense for people in the private sector, but to me, it's been a whole new world.

Hard to believe how much my world has changed since I got back from Afghanistan a little over a year ago.

(And for those curious, I eventually cut the beard.)
Posted by Jordi at 12:02 AM No comments: