Arranging a race between Neil Fallon of Clutch and John Andretti 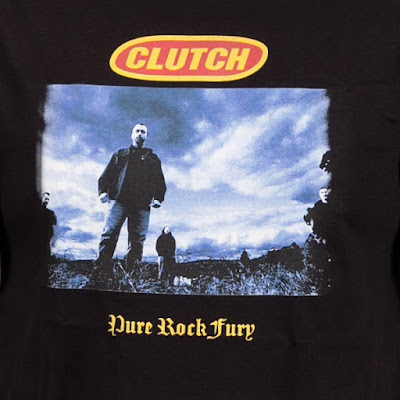 Recently, I attended my eighth concert of heavy metal stalwarts Clutch. I've written about my affinity for Clutch before, both here and in the Tampa Bay Times.  But today I wanted to share a few things: a link about Clutch and the time I tried to arrange a go-cart race between the lead singer of Clutch and a member of the famed Andretti family.

The Wall Street Journal recently wrote about Clutch in their Speakeasy blog. Of course, there is a Star Wars tie-in, because it's 2015 and there has to be, but it is still a good article.

The third time I saw Clutch was in Tallahassee, Florida at one of the many locations of the Cow Haus, which moved several times before settling at a location on Railroad Ave and then became The Beta Bar.

(At the old location I saw Jerry Cantrell of Alice in Chains and Clutch and in the newer locale I saw Buckcherry and Clutch again.)

Prior to the first time seeing Clutch in Tallahassee, I dropped an email to the (at-the-time unofficial) Clutch website: Pro-Rock.com:

Hey man,
Great job on the pro-rock page. I've been checking out for years now (since 96 or so) and I just want to say keep up the great work. I have a question for you maybe you can relay to the band. Is Neil really interested in racing Andretti as he mentions in Pure Rock Fury? I am from Melbourne, FL and there is an Andretti Thrill Park go-cart type place here that my mother works in. John Andretti usually visits the park when NASCAR races in Daytona. Maybe, just maybe Neil can show Andretti how ready he is.
Mike

A few weeks later, I received a reply.

forwarded message to Neil. let me know if you hear any replies.


A few months after the correspondence, on June 2, 2001, I attended the show. I was lucky enough to chat with each member of Clutch and get them all to sign my copy of their CD "Pure Rock Fury".

When I chatted with lead singer Neil Fallon, I asked him a few questions such as which was his favorite song, if he remembered the location where I had first seen them in a bar in Houston, Texas on October 10, 1997, and whether or not he received the above correspondence. Fallon said he did, but unfortunately he was not able to get to Melbourne, Florida to actually race an Andretti.


ANDRETTI'S NEVER RACED ME BUT IF HE WANTS TO OH I'M READY COORDINATION OF THE EYE AND HAND IS NOT MY STRONG POINT BUT I MAKE DUE WITH WHAT I HAVE.

In the 14 years since, I wonder if they ever made it happen.
Posted by Jordi at 9:54 PM No comments:

As part of my ongoing effort to create a documentary/archive of the works of Kenny "Kenny K" Waters, Tampa's first hip-hop DJ, I attended the 3rd Annual Kenny K Tribute Concert. The concert took place in Ybor City at Crowbar on October 25th.

Among the many videos I recorded during the show was the return of Shock G aka Humpty Hump to the Tampa hip-hop scene. Although he garnered most of his fame through his work in Oakland, to include discovering Tupac Shakur, Shock G openly acknowledged Kenny K's influence and ability in creating Digital Underground, one of hip-hop's most legendary groups. While Shock G had performed in Tampa several times since, it had been nearly 20 years since he performed in front of audience there to celebrate Kenny K and Tampa's hip-hop roots.