Playing Spades in the Army 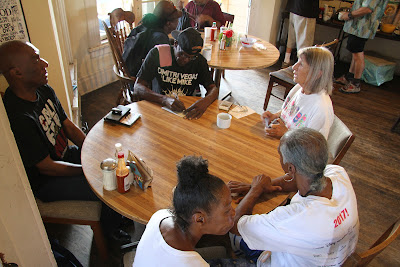 The other day I found an article entitled "A Caucasian's Guide to Spades" on Deadspin.com - or a subsite of Deadspin, whatever constitutes Deadspin these days.

It's been a long time since I played Spades. A really long time. At least 10 years. I think the last time I played was at a college party in my apartment complex in Tallahassee. If I remember right, in one of my neighboring apartments was a group of African-American students. I was cool with them and they had a party and invited me over. In the apartment were a few people playing Spades. When I said I played, I was invited into the game when one person left. After a few games, and a few wins, I made a few new friends and was given the nickname "White Mike" - as to differentiate me from the African-American guy also named Mike in the apartment. I guess he had first dibs on the name.

But that was acceptance. I wasn't "Neighbor Guy" or "Dude from over there". My Spades ability had given me a name.

Not bad considering I hadn't played for years before that.

I learned how to play Spades in the Army. I remember the first time I saw people play was at the National Training Center in California in Fall 1996. I had only been in my unit for a few months and was still trying to find my place.

My section sergeant at the time was a combat veteran named Sergeant Wallace. He was in the 82nd Airborne during Operation Desert Shield before coming to the 1st Cavalry Division. These were days before everyone was deployed and everyone had a combat patch. In my unit, combat experience was rare. SFC Wallace, an African-American, was also a good Spades player.

(Side memory: two words of advice I will always remember from that sergeant were: "Mean what you say and say what you mean." and "Be who you is, because if you is who ain't, you ain't who you is.". I think those are words to live by.)

While the article mentions a lot of the social nuances of Spades, it does not mention how to survive as a beginner. And that's tough. Because if you screw up, you will never sit at the table again. Especially if you are white. You are done. Don't come back.

If I remember those days 20 years ago, I made a few mistakes, but figured out the hang of it. But this line from the article is dead right:


The greatest Spades player in the world is nothing without a good partner, and an experienced partner can make a beginner look like a pro.

The article is also correct in that Spades teaches you confidence. Never underbid, because you look like an idiot if you bid low, but score big. But also, if you say you got your books, you better get your books. Say what you mean, mean what you say.

The article is also absolutely correct about trash-talking. Absolutely. Although I don't remember specific name calling, there was a lot of "what you got?", "you ain't got nothing", and psychological intimidation such as your opponent putting the card they are going to play on the table face down before you played your card. In other words, the card you are about to play doesn't matter to them. In another trash-talking moment, I remember SFC Wallace jumping from the table, smacking someone in the forehead with the winning card, slamming it on the table, and ending the game.

That's how I learned how to play Spades.

Looking back, I don't remember playing Spades in either international deployment - either in Bosnia on active duty or in Afghanistan as a contractor. Military people have to still be playing Spades somewhere. It's part of their heritage. I think troops were playing while waiting to board Washington's boat across the Delaware and they were most definitely playing before the battle of Gettysburg.

Michael Harriot's article on Spades was a fun walk down memory lane. Maybe sometime soon I can find some folks playing Spades, wait for one of them to go to the bathroom, slide into the game, and be called "White Mike" again.

Email ThisBlogThis!Share to TwitterShare to FacebookShare to Pinterest
Labels: Memories

Check out Hardboiled - a stopmotion film about crime-fighting food

The other day I received an email from my cousin Jan. She is an Executive Producer for Hornet Films, a New York-based studio that produces animation shorts and stop-motion films.

Jan's email asked for support for a new project a Hornet director is working on: Hardboiled, a stop-motion film about crime-fighting food. According to the Hardboiled IndieGoGo page,

"The 20 minute film is shot entirely in stop motion and each character, set piece, and prop has been built by hand right here in DUMBO, Brooklyn."

Here is the trailer:


This looks so cool and I know someone involved in it. Which is even cooler. But look at all the detail and all the work being done there.

So if you can, click the IndieGoGo link above and support the project. Or maybe just watch the trailer and spread the word.
Posted by Jordi at 5:04 PM No comments:

The Innovation of Notorious BIG and Jimi Hendrix

While perusing Facebook the other day, a saw a few musical videos my friends posted. While they weren't meant to be similar, I saw a trend. Both had to do with the evolution of musical genres.

The first video shows us an early Jimi Hendrix playing guitar for a group called Buddy and Stacey and the Upsetters. Recorded in 1965, two years before he started The Jimi Hendrix Experience, we can see Jimi playing the role of background piece. He is not the focus of the band, or the sound.

Through influences such as Buddy Guy and Chuck Berry, Jimi Hendrix was able to revolutionize rock music. He took the blues ideal of putting the guitar player in front, added new technology, mixed in the lyrical stylings of Bob Dylan and other folk performers, and set the world and his guitar on fire.

The evolution of Jimi Hendrix and rock music in general is similar to the evolution of hip-hop lyrics in another recent video. In a video for Vox Media, music journalist Estelle Caswell breaks down the progression of lyrics from the simplest bars and rhymes of Kurtis Blow to the complex composition of MF Doom.

But one of the MCs Caswell focuses on extensively is Notorious BIG and his 1997 song "Hypnotize". She calls it "one of the smoothest rap songs ever".

What is most interesting about Biggie is how he completely eclipsed his labelmate Craig Mack. While Craig Mack was a decent rapper and could hold his own bar for bar - see Flava In Your Ear - when Sean Combs signed Biggie, Biggie's style was so beyond Craig Mack that Mack became not only irrelevant on the label, but also in the genre.

I would love to see a side-by-side decomposition of Biggie to Craig Mack. I think therein lies why one is regarded as one of the best rappers of all time and the other is a footnote.

In the dog-eat-dog world of hip-hop, rappers have to battle for supremecy. Biggie did that when he toppled Craig Mack on Mack's "Flava in your Ear" remix. Guitarist rarely go toe-to-toe in the same song. There are few headcutting battles like we saw in the blues movie Crossroads.

Maybe that's why rock isn't as innovative anymore and why there isn't much complex ground being broken. Innovation is only on the fringes.

Rock needs a new Jimi Hendrix. But with music going digital, the world of musical innovation is either on a keyboard or in the pen of a lyricist. And that's why Biggie will always be regarded highly, perhaps as the Jimi Hendrix of Hip-Hop.
Posted by Jordi at 3:41 AM No comments: