Curveball at the Crossroads interview with Minor League Baseball 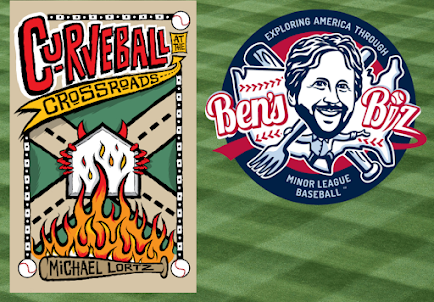 I have been e-friends with Minor League Baseball writer Ben Hill for a long time. I met Ben at the Orlando Winter Meetings in 2010 or so. When I wrote for Bus Leagues Baseball I wrote about how he visited Florida in 2012, but unfortunately I was out of the country. I did finally have a chance to meet him in a ballpark with fellow Minor League aficionado Jeff Perro in Dunedin in 2015. Check out Ben's write-up of me sampling hot dogs at the ballpark. Priceless! 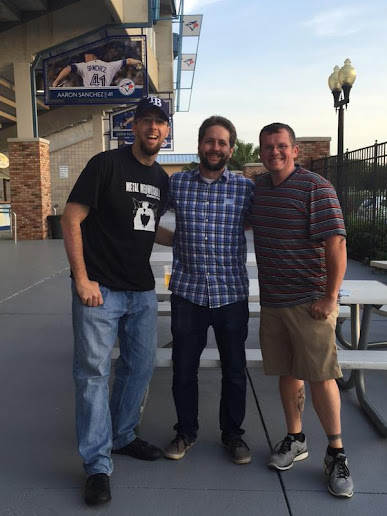 I sent Ben an early copy and doggedly kept asking when it was going to make the top of this TBR (to be read) list. This winter, Ben finally read Curveball at the Crossroads.

As for the book itself, I enjoyed the story and thought the closing section where he was working at Inga's was particularly strong. Also appreciated the absurd humor, and that it was conveyed in a dry way that never felt self-consciously zany. On the less positive side, it still felt better served as a  long short story (or a novella) to me. Plot momentum weighed down by too much day-to-day, month-to-month, season-to-season baseball details. I've always tried to accentuate the positive in all I do professionally but also want to be honest on both sides of the equation.

He liked it, he just thought it should have been tighter. Everyone is entitled to their opinion, of course. But despite the mixed review, Ben would do me a huge favor this week by having me on official Minor League Baseball podcast The Show Before The Show Episode 341.
On the podcast, Ben asked me about my writing history, influences, and how Minor League Baseball plays a role in the book. I thought it was a really great interview with questions I don't normally get about the book, but questions I thought were important, especially in regards to the environment in which the book takes place.
I downloaded the podcast and uploaded the 14 minute segment with Ben and I into a youtube video.
Posted by Jordi at 12:21 AM No comments:

Curveball at the Crossroads featured on Amazon Live

I have been friends with my buddy Adam for a long time. Over a decade. In the last few years, he has become quite the maven in online sales. He has several youtube channels pitching products, instagram pages promoting wares, and Amazon videos discussing the intricacies and finer points of many great and wonderful goods. He has become a master at selling. An online Billy Mays, if you will.

So it is always a pleasure when Adam invites me on his new Amazon Live show. He broadcasts live to Amazon every Tuesday night at the ELITE DEMONSTRATIONS channel. This past Tuesday he asked me to be his co-host and in turn, he would include Curveball at the Crossroads in his product carousel. Super great deal for me as I enjoy being in front of a camera and I can't beat the free advertising for my novel.

Along with Curveball at the Crossroads, Adam frequently features other great products such as the Facebook Oculus, amazingly comfortable blankets, a massage gun, a GPS tracker, Trivial Pursuit, and funky room lights. It is a mix of the practical and fun. And my book.

Last week, we had dozens of people watching the show at any given moment. That might not sound like much, but it was triple what we started with weeks ago. The goal is to get a lot of viewers as Amazon promotes their Live platform as a competitor with QVC or Home Shopping Network. The fun thing abou Amazon Live is that anyone can be a creator and the ability to make money is not limited to a TV network. And of course, if you buy my book through Adam's show, he makes a little money, Amazon takes their slice, the publisher takes their slice, and I am left with the rest.

It's not much, but every bit helps. And every review helps, which is important to the almighty Amazon algorithm. It's how I become a best seller.

And it all starts with people watching ELITE DEMONSTRATIONS on Amazon Live on Tuesday nights.

Introducing Torian Brackett, narrator of Curveball at the Crossroads 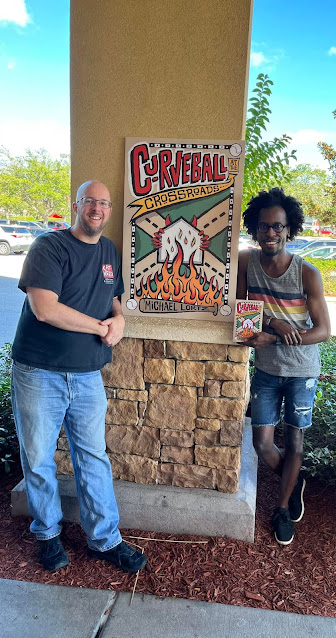 (Click here for Curveball at the Crossroads on Audible.)

Being that I have never recorded a book reading, I knew creating the audiobook was way out of my league. I had to bring in professionals. So I looked online and found The Audio Flow, an audiobook production company out of Chicago run by Jocqueline Protho. I called Jocqueline and spoke about the book, my ideas, and how I envisioned Curveball at the Crossroads: The Audiobook. Jocqueline was awesome and we came to a quick agreement. After a few weeks of details, she sent me an audition, claiming the voice actor she found was "perfect" and that I wouldn't need to hear anyone else.

Torian Brackett is an actor/performer from New York City. He is the mind behind TeeBeeVO and an exceptional performer, who has graced stages, voiced video games, and been in countless commercials. He is also the same age and demographic of JaMark Reliford, the protagonist in Curveball at the Crossroads. He was indeed a perfect choice.

After connecting on social media, I had a chance to meet Torian in Orlando, Florida during the Christmas holiday. He was in town visiting family and I am only an hour away in Tampa. We met for brunch and had a great chat. We talked about the characters, their personalities, and our perceptions of them. By giving them life through sound, Torian may know my characters as intimately as I do, and that's saying a lot.

(Funny aside: my book was the first thing Torian signed as a voice actor. A book signed by him and the cover artist is going on my bookshelf. I will also have books signed by Torian, the cover artists, and myself available for sale if interested.)

Expect a video interview between me and Torian very soon. If our brunch was any indication, it will be a great discussion if you want to know the behind-the-scenes of Curveball at the Crossroads.

Check out a sample of Torian's narration in the video below and click here for the Audible link to Curveball at the Crossroads.