The Church of Groove and Dissonance 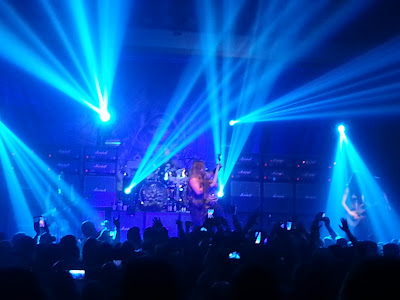 (Here is a bit I wrote several months ago that intended to be in the front of a write-up of a concert I went to a posted about a year ago, but after I wrote the whole thing, I felt like I took way too long to get to the point. So I chopped this part off. But I still think is really good and being that I am not going to any more concerts in 2012, I guess this is the closest I will get to writing about live music until I get back to the states.)

According to most studies, roughly 70% of people believe in God. Of them, 40% or so attend a religious service weekly. Organized religion provides the sense of community, bonding, and support many people need to get through their daily grind. They look forward to their time of brotherhood, when they can gather and rejoice among like-minded believers.

Somewhere along the way, I opted out of organized religion. While I still believe in a higher power, religious organizations just aren't my bag. I understand their place and I have nothing against them, but they aren't where my soul seeks solace and camaraderie.

It might seem unorthodox to some, but I find my comfort at rock concerts. Not in huge festivals either, although those are fun, but in dark, smokey, sweaty, rock bars, where the music penetrates the mind, the crowd sways and ebbs as one, and the lead singer hold court like an ancient shaman. Where Dionysus dances on stage to the primal rhythms of life. Where the annoying repercussions of tinnitus stay with you for several days - an accepted unhealthy reminder of your mental inebriation.
Posted by Jordi at 12:40 AM No comments: 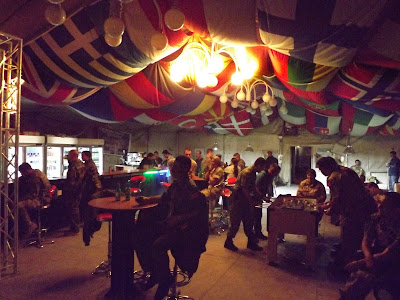 Wow. A few days ago, I realized I have already been in Afghanistan for three months. Hard to believe, honestly. But time flies when you are having fun. Or when you are working 12 hours a day, everyday.

As the kids say, "same difference".

Three months in Afghanistan means I am pretty much confident in what I am doing and almost becoming a subject matter expert in my job, at least as far as the everyday rigmarole goes. Although I am working as part of a two-man team, during the last month the other guy had to leave Afghanistan for a few weeks and I was required to do the job solo. Which although I had to turn in some 15 hour days, made me fully understand the job top-to-bottom, inside and out. Which actually made for a better team when he thankfully returned.

In the past month, I have also been able to try some Afghan food. They have a very good rice meal that mixes brown rice with raisins, nuts, carrot slices, and lamb. It is tasty. Perhaps I will do the foodie thing and take pictures next time I eat local cuisine.

Working with local Afghans also has another interesting advantage: teaching American slang and terminology. I've mentioned before on this site that some of the locals I work with have an interest in American movies and watch them quite often on the office television. A few weeks ago, the movie "Dead Presidents" was the cinema du jour. That led to an interesting discussion on the term "dead presidents" which then led to a conversation on American money and who we have on our currency and why they are there. When one of the locals asked me if American presidents can put their own picture on the national currency it reminded me how little power our leaders have compared to more power-hungry rulers in other parts of the world. I think if an American president tried to replace Washington, Lincoln, Franklin or any of our founding fathers with his own visage he would be laughed out of office.

I've also stepped on to the "football pitch", or "soccer field" as it is known in America for the first time in 20 years. My predominantly international office routinely reserves the base field for soccer once a week. It is a great team-building event and helps bring together a lot of people from various countries who might typically keep their relationships work-related. Playing sports creates bonds of friendship and camaraderie. Needless to say, however, I was not very good. I was counselled quite often by some of my European teammates. But I wasn't that bad when put in goal. My Italian collegue complimented my play and one of my Slovak co-workers actually invited me out to the next week's contest. At this rate, in a year, I might be below average on the European scale. That's my goal.

Three months here also now makes Afghanistan my second longest military-based trip, surpassing my jaunt to Qatar a few years back and behind only my excursion to Bosnia back in 1998-99. So much is different between this adventure and the Bosnia mission. For one, communication. When I was in Bosnia, the internet was in its infancy and email was something I did maybe once a week. Today, as evident in this post, I am able to communicate with almost the same ease I would in the states. I can blog, tweet, post on Facebook, and most importantly, Skype. Back in 1999, video teleconferencing was barely an option, and was primarily for the married troops, and for only five minutes at a time.

Another interesting aspect of this trip compared to others has been my observation and understanding of the human side of people, both the Afghans and the other people who are here for whatever reason. Back in my military days and even probably a little beyond that, I don't think I cared as much and regarded the people around me as just playing accompanying roles in my journey. Now I ask them how they are doing and try to learn at least a little about them: where they come from, their family back home, where they want to go from here, etc. Whether I know them for a month, a week, or the whole year, it's best to make the best connections possible as we are all in this together and I might never know when I'll need their support or they might need mine. This might be based a bit on the fact that unlike my other trips, I came here by myself and will leave by myself. In this sort of environment, the people around me will come and go, again some for longer time than others.

In lighter news, I've been studying comedy a lot in my spare time, finally reading a book on the art I bought while taking a stand-up course a year and half ago. I've also been watching early episodes of Saturday Night Live almost every night and taking notes on what makes them funny. I am almost through Season 1 and have  Seasons 2-4 in my footlocker ready to be opened. This increased exposure to comedy has also led to me writing comedy bits about the base and working in Afghanistan. I hope to find my way on the base club's stage soon. It's going to be interesting performing in front of an international audience, but I'm going to give it a shot.

Finally, one last Bosnia-Afghanistan comparison: my trip to Bosnia was where I created the nom de guerre "Jordi Scrubbings". Here I am 13 years later writing on JordiScrubbings.com, still using the moniker. I guess the more things change ...
Posted by Jordi at 12:39 AM No comments:

Afghanistan and the American Right Wing View on Media 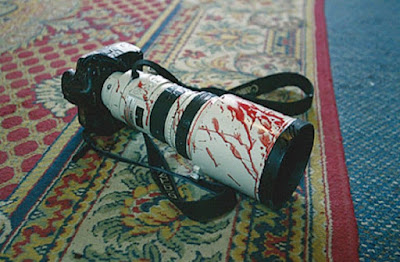 Living and working in Afghanistan provides for some interesting experiences. None perhaps are more interesting than the conversations you can have with people from all over the world. And among those, some of the more interesting are with some of my fellow Americans.

These statements are others of their ilk are not only ignorant, they are completely hypocritical considering the current problems of Afghanistan. These people need to poke their heads out of their myopic little holes, see the greater world around them, and stop making mountains out of what they believe are American problems.

For whatever reason, conservatives believe the “media” is an anti-military, anti-American, Communist machine. Besides the painfully ignorant fact that they only define “media” as cable television, they fail to appreciate the ability of people in America to write, say, or broadcast what they want. Americans are not jailed, beaten, or killed for blogs, videos, or tweets as they are under oppressive regimes. Many conservatives are too busy complaining and bitching about the problems they believe are with a small segment of the America media to acknowledge that American problems are not truly problems.

In Afghanistan, there is no freedom of press. If the Taliban doesn’t like what you write, they kill you. There are few Afghan media voices here documenting corruption, writing about the atrocities of the Taliban, or even telling the stories of everyday Afghans. Most of the press here is international. Few Afghans have running water, no less the ability to go online and blog, tweet, or create a youtube video. There is little press, no less conservative or liberal leaning.

There is an index called the Press Freedom Index put out annually by Reporters Without Borders. In its latest release, America was ranked 47th. Meanwhile, Afghanistan is currently ranked 150th. Syria is ranked 176th, China is ranked 174th, and Saudi Arabia is ranked 141st. What does that tell you about the Afghan freedom of press?

So before American conservatives can talk about what cable station is liberal and why it is un-American for its Globalist outlook, they should talk about the freedom of Afghans to say or broadcast what they want. They should help build successful media networks here instead of complaining about what they think is a problem back home.

Americans should be all about freedom, right?
Posted by Jordi at 9:40 PM No comments: