Over a year ago I wrote about finding one of my more creative poems in different, unexpected places throughout the internet.

I found the poem, entitled "A Forgiveness Poem to Bologna", on poetry lesson websites, on a text lesson website, and on deviant.com where someone actually tried to claim it was theirs.

This week, I found my bologna poem on yet another website. 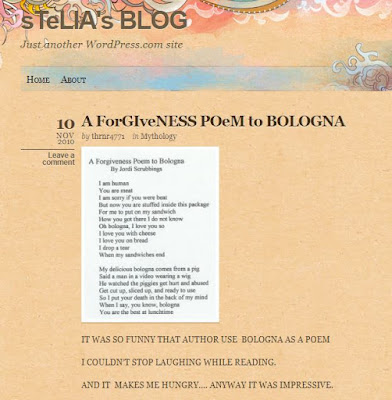 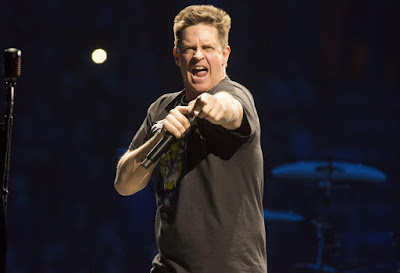 A few years ago, I replied to a tweet by comedian Amy Schumer. Schumer must not have liked my reply and she blocked me. I wrote about the incident here.

I always thought that was strange. I don't engage with celebrities very often, so to get that harsh of a response from someone for what I thought was a benign comment was odd. But that's how she rolls, I guess.

Recently I had another twitter incident with another famous comic. One I have seen live a few times and admire his roles in movies and other media.

But alas, I've been blocked by Jim Breuer.

It all started a few weeks ago when I read an article on UltimateClassicRock.com entitled "Are Opening Acts a Thing of the Past?". The article details how Metallica is no longer touring with an opening act, instead opting to have Breuer, a longtime fan, act as MC to get the crowd warmed up.

The logic of the move to eliminate the opening act is that according to promoters, few fans are there to see the openers, so it is best to skip the formalities and jump right into Metallica. Which I can attest is a stupid idea. In 1999, I saw Sevendust, Creed, and Kid Rock open for Metallica in front of 75,000 fans at the Orange Bowl in Miami, and although each band was relatively new, they all kicked ass prior to the headliner.

But oddly, Breuer agrees with Metallica's new touring philosophy. He states the following:

From a comedian, I found this to be out of touch. Opening acts are part of the show, both in comedy and rock. I have seen Jim Breuer do stand-up a few times. Every time, there was an opening act.

So I tweeted my disagreement with Breuer's stance. 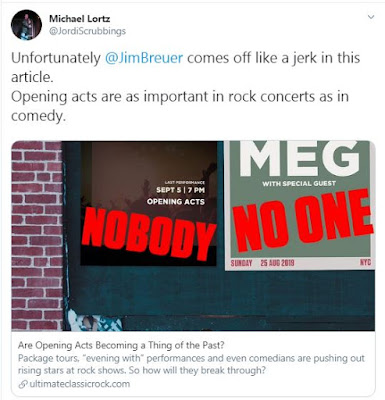 Breuer must have seen the tweet and not liked my opinion of his opinion as he replied: 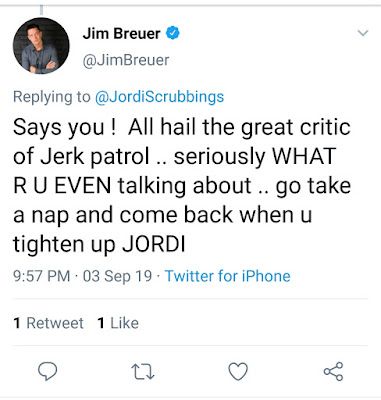 Pretty sure Breuer didn't read the article before replying and telling me to take a nap. Which is unfortunate, because then we might have had an intelligent discourse on opening acts and modern tours. Maybe I am reading his comments the wrong way. But alas, Breuer was quick with block button, forbidding me from ever seeing his tweets again. 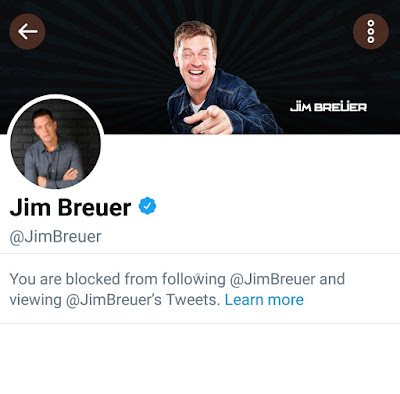 But I think there is another force at play here. I don't think Breuer was quick with the block because he was being a jerk, although that is a possibility. I think his emotions were running high on another target and I was collateral damage.

Jim Breuer is a huge Mets fan and the Mets were not having a good night.

Sometimes the Mets bring out the worst in people.

The next time Breuer comes to Tampa, I will buy a ticket. I am still a fan and I hold no ill will. I think think he is a funny dude. But I will print out the tweet calling me the "great critic of jerk patrol" and ask if he will autograph it. Maybe I will even make and wear a t-shirt that says "great critic of jerk patrol" and ask for a picture with Breuer.

You can't take life or twitter seriously.
Posted by Jordi at 3:03 AM No comments:

Here is a Star Wars-related political parody I wrote a few months following the terrorist attacks 9/11/2001. This would be great to see in parody video, maybe even deepfake. Unfortunately, I am much more of a writer than a video creator.

A SHORT TIME AGO IN AN ISLAMIC COUNTRY FAR AWAY….

We see the negotiating team of Bill and Hillary Clinton as they venture deep into the Al-Qaeda territory of Afghanistan, seeking the peaceful handing over of Usama Bin Laden. As the couple reaches the audience of the Taliban Rulers, they play a hologram message sent by President George W. Bush for the leaders of the Taliban government.

PRESIDENT BUSH
Greetings, Exalted Ones. Allow me to introduce myself. I am George W. Bush, President of the United States. I know that you are powerful, mighty Taliban, and that your compassion for Bin Laden must be equally powerful. I seek an audience with Your Greatness to bargain for Bin Laden's life. With your wisdom, I'm sure that we can work out an arrangement, which will be mutually beneficial and enable us to avoid any unpleasant confrontation. As a token of my goodwill, I present to you a gift: these two negotiators.

Hillary is startled by this announcement.

HILLARY
What did he say?

PRESIDENT BUSH (cont)
... Neither is hardworking but will serve you well.

HILLARY
This can't be! Bill, you're playing the wrong message.

THE TALIBAN RULER
There will be no bargain.

THE TALIBAN RULER
I will not give up my favorite guest. I like Usama Bin Laden where he is.

Several of the Taliban soldiers march Bill and Hillary down a dank, shadowy passageway lined with holding cells. The cries of unspeakable hostages bounce off the cold, stone walls.
Occasionally a repulsive arm grabs through the bars at the hapless negotiators. Bill whines pitifully.

HILLARY
What could possibly have come over President Bush? Is it something I did? He never expressed any unhappiness with my work. Oh! Oh! Hold it! Ohh!

A large arm wraps around Hillary's neck. She manages to break free, and they move on to a door at the end of the corridor.

MANY DAYS LATER, AT THE TALIBAN CAPITAL OF KABUL….

Noisily, the main gate opens to flood the blackness with blinding light and reveal the silhouetted figure of PRESIDENT GEORGE W. BUSH. He is clad in a robe similar to his father's and wears neither pistol nor sword. President Bush strides purposefully into the hallway. Two giant guards move to block his path. President Bush halts.

President Bush raises his hand and points at the puzzled guards, who immediately lower their spears and fall back. The young President lowers his hand and moves down the hallway.

Saddam Hussein appears out of the gloom. He speaks to President Bush as they approach each other, but President Bush doesn't stop and Saddam must reverse his direction and hurry alongside the young president in order to carry on the conversation. Several other guards fall in behind them in the darkness.

PRESIDENT BUSH
I must speak with the Taliban.

Saddam answers in Arabic, shaking his head in denial. President Bush stops and stares at Saddam; he raises his hand slightly.

PRESIDENT BUSH
You will take me to the Taliban now.

Saddam turns in hypnotic response to President Bush's command, and the president follows him into the gloom.

PRESIDENT BUSH
You serve your allies well. And you will be rewarded.

HILLARY
At last! President Bush has come to rescue me.

The Taliban Ruler awakens with a start and Saddam continues, in Arabic:

THE TALIBAN RULER
I told you not to admit him.

PRESIDENT BUSH
I must be allowed to speak.

SADDAM
He must be allowed to speak.

The Taliban Ruler, furious, clobbers Saddam and shoves him away.

PRESIDENT BUSH
You will bring Usama Bin Laden to me.

THE TALIBAN
Your mind powers will not work on me, boy.

PRESIDENT BUSH
Nevertheless, I'm taking Usama Bin Laden and his organization. You can either profit by this... or be destroyed! It's your choice. But I warn you not to underestimate my powers.

A Brief History of The Man 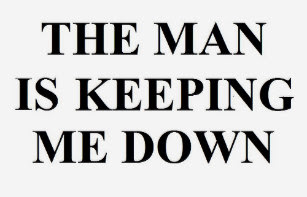 This blog has chronicled the adventures of the AfroSquad for over 10 years. One of the original concepts behind the AfroSquad, before the wrestling and before the comedy, was a struggle against The Man.

But what is The Man? How long have people been fighting The Man?

"The Man" is an intangible bugaboo that masterminds the hardships and tragedies of that thing we call life. Being technologically superior, he can morph into anything he wants- your boss, the local authorities, the president, your parents, a lawyer, the guy that signs your inadequate paycheck, etc."

The AfroSquad was highly influenced by the blaxplotation films of the the 1970s. But The Man goes back further than that. Much further.

The Oxford Dictionary of American Political Slang does a great job of detailing all the early mentions of The Man on page 173. 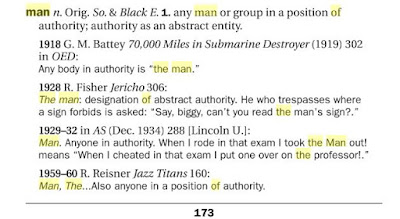 In the 1960s, The Man moved from Southern and Black Etymology to a more wider use. White counterculture also used the term to discuss their frustration with authority.  While Yippies and others diminished the racial and historical context, fighting The Man became a universal effort. This change is well described in The Age of the Crisis of Man: Thought and Fiction in America, 1933–1973 by Mark Greif, pages 269-272. 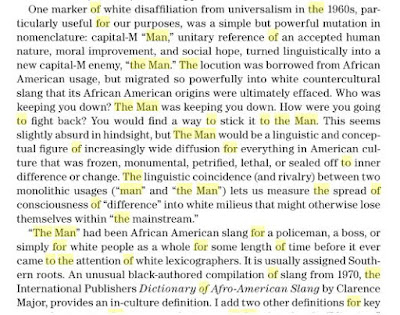 While fighting The Man had become universal, The Man moved to black cinema as the omnipotent antagonist in blaxplotation films. According to museumofuncutfunk.com

"During the 1970’s the term “The Man” became a part of the vernacular of the Blaxploitation film era. “The Man” referred to the police, the mob, the politicians and anyone who was white with power. In most cases “The Man” held the key to the destruction or redemption of Black characters in these films."

After blaxploitation films, The Man slowly diminished from use as a negative term. It started being used as a positive term such as "You are The Man."

In the late 90s, the AfroSquad started doing their thing in the early internet.

Then, in 2002, The Man had a renaissance in cinema with the movie Undercover Brother. Comedian Eddie Griffin’s character took on a faceless Man who ran an omnipotent multi-national corporation and made life difficult for a diverse group of heroes.

Currently, there is news that Undercover Brother 2 will soon see the light of day. Will the antagonist be The Man?

The Man is still out there, and still holding people down. We should never forget the original meaning and absolute power of The Man.
Posted by Jordi at 2:00 AM No comments: