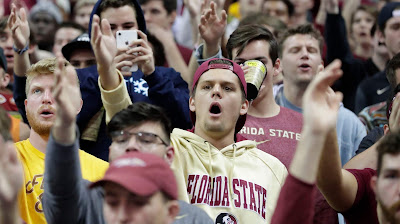 A few months ago, I wrote a post about an ESPN Magazine writer who decided to tweet how she was rooting against Florida State for no other reason than she disliked how the school handled the legal repercussions of Jameis Winston's actions. I thought making her opinion public was a bad idea, if only because promoting her biased opinions on her platform would make her ability to be unbiased on future work questionable.

My post was read by another ESPN Magazine writer who called my post "the stupidest thing he had ever read". I had to email the responder and talk out our points.

As I read Baker's piece, it reminded me of the stories of a war correspondent.


For my role in reopening a dormant investigation, Florida State fans wanted me to die of brain-eating cancer and in a car crash on my way home. They told me to jump off a bridge and get hit by a truck. They suggested I get intimate with a monkey infected with AIDS.

I felt bad for Baker. No writer should be harassed, no matter their assignment. They are doing their job. A job given to them by their editors and guaranteed by the First Amendment. Reporters are the watchdogs of society, the all-important fourth branch of government.

But there are ways to deal with internet trolls. Recently, former Major League Baseball pitcher Curt Schilling released the hounds on several trolls who insulted his 17-year old daughter on twitter. Despite different rooting interests, many sports fans went after the trolls for crossing the line. The identifiable group will now always see their names linked to their actions.

In Baker's case, however, instead of naming names, he used terms such as "Florida State fans" and "fans bombarded my phone" and in regards to threats to the accuser, "Fans threatened to burn down her sorority house". He only refers to the people harassing him as "trolls" once.

As a Tampa Bay area writer, Baker missed a great opportunity to showcase the difference between good "fans" and "trolls". I would have liked to see Baker focus his article (or perhaps a future article) on the actions of FSU supporters in real-life and their actions behind the keyboard. Going on the offensive as Schilling did might reveal interesting disparities.

For example, Baker could have added details about positive interactions with FSU alumni in his neighborhood.


He writes: Fans bombarded my phone with more than 100 calls over a couple of weeks. I answered almost every one, never knowing if it was a legitimate tip or a prank some troll would illegally record to laugh at online.

He could have added:


Yet once a week, my wife and I had dinner with our neighbors, both Florida State alumni. He is a lawyer and she is doctor. When I asked about Jameis, both stated they admire his talent, but his off-the-field drama has become a distraction.

For every online incident, it would have been nice to read a real-life counter interaction. Are Seminole fans the same in real-life as they are online? I'm sure the answer is no. Perhaps, like Schilling, Baker could have uncovered a model citizen who was harassing him behind the thin veil of the internet.

He could have added:


One night, for example, I received a tweet from Joe Blow, who goes by the twitter handle @NoleDudeABC123. After Blow told me to jump off a cliff, I googled his name and discovered he was a marketing professional in Orlando. I'm sure XYZ789 Marketing in Orlando would be pleased to know their employees are sending death threats through social media.

Perhaps Baker doesn't live by any FSU alumni. Perhaps he doesn't work with any. Perhaps he doesn't have any in his family or circle of friends. I find that hard to believe, especially if he is in Tampa Bay area, but perhaps that is the case. Another option Baker could have taken would be talk to prominent Seminoles in the Tampa Bay area and get their thoughts on the trolls. Maybe public shaming would make a troll or two think twice. Perhaps Baker could have listed the trolls on in a blog post and "FSUTwitter" could have policed itself as sports fans did for Curt Schilling.

(Isn't that the same theory many espouse in regards to Islamic extremism? "The leaders of the Muslim world should stand up and denounce the attacks", they say. Well, shouldn't the same apply to other groups? Aren't fan communities basically the same as religious communities? And wasn't that also mentioned during the riots in Ferguson, Missouri? Many said the black community needed to step up to stop the looters. Again, calling for a community to police itself.)

Admittedly, not all social media trolls and bullies leave breadcrumbs to their real identity. As a matter of fact, most don't. But some do. And those foolish enough to use their real names or some marking identifier should be called out, their information published, and their reputations ruined.

Unfortunately, by not using qualifiers in his article, Matt Baker left open the impression that the Florida State community is either supportive of or impartial to online bullying and trolling. I can't speak for the thousands of alumni in the Tampa Bay area or nationwide, but I believe any effort to eradicate trolls and bullies is a good idea. Even if they claim to be Seminoles.

(Addendum 1: I've corresponded with Matt Baker before. Not only have we conversed on twitter about the Rays, but I also emailed him the day after this article was published. He replied in kind and I have no qualms at all with him personally. I just think his article could have been framed a little better.)

(Addendum 2: I freelanced for the Tampa Bay Times music section a few years ago. Great newspaper and great people.)
Posted by Jordi at 10:14 AM No comments: