Everything Comes to He Who Hustles While He Waits

Here is bottom line, for those wasting time
Not paying attention
Because they can't afford free speech

People said James Brown was also the Godfather of Funk and Hip-Hop
I give thanks, because early hip-hop conditioned me
To create
because that's my mission
So listen close to what I say,
Because this type of shit happens everyday.

Whereas we try to make money
Time roots against us, no matter what
The passing of time changes the rules of the game

Yet, we waste time when we wait
Our time becomes waste
Garbage
Thrown out with no value

So why wait?
Don't waste time
Don't let the game pass you by
Keep your value high

Hustle
Posted by Jordi at 8:16 AM No comments: 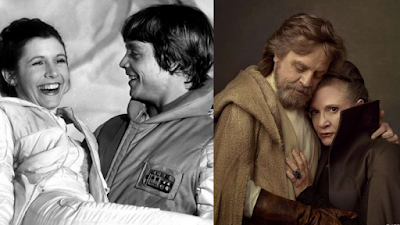 I write about Star Wars often on this site, but I wasn't sure how to write about the passing of Carrie Fisher. She was important, but I was more into other elements of the saga, from the Jedi to the aliens. I was fine with letting others discuss her impact on their Star Wars fandom.

That changed, however, after reading Mark Hamill's tribute to Carrie Fisher. I realized something important.

Carrie Fisher influenced the type of women I am attracted to.

I have never been attracted to the Barbie doll type. The type of women who got my attention were strong, smart, outspoken, and driven. They could hold their own in life and didn't need a man unless they wanted one. They were more Princess Leia than Cinderella.

When I was growing up, most young males I knew usually either identified with Luke Skywalker or Han Solo. Solo was the bad boy smuggler with his own spaceship who shot first and didn't bother to ask questions. Skywalker was the kid who still hadn't figured out who he was. Solo lived life his way, from one end of the galaxy to the other. He had stories and experience. Luke was a dreamer who stared at the twin moons of Tattooine. As Yoda said, "All his life has he looked away ... to the future, to the horizon. Never his mind on where he was."

With that in mind, here is where Mark Hamill's tribute to Carrie Fisher became very interesting.

Carrie Fisher recently admitted to an affair with Harrison Ford while they worked on Star Wars. Ford, like Solo, was confident and experienced in Hollywood. Fisher was enamored with him. Meanwhile, her and Hamill became friends.

Mark Hamill could only be friends with Carrie Fisher. Even if he ever wanted otherwise.

I've met women like Carrie Fisher/Princess Leia. Women I was in awe of, even if I also consider myself an over-achieving, A-type personality. They were amazing, bright, funny, and beautiful. I've even met some, like Fisher, from successful families with their career on a paved road to success.

But like Carrie Fisher, they had their eyes on other men. And also like Fisher, perhaps their struggle wasn't in their career but something more personal. Something at a level I could never know.

(I'm combining Fisher/Leia on purpose, as she admitted she was very similar to the character she played. I think the same is true to a point for Ford/Solo and Hamill/Skywalker. Hamill might not be a monk on a mountain, but his naivety in Hollywood must have been similar to Skywalker's as a teen on Tattooine.)

For many of these women, I was Mark Hamill. I was the guy to joke around with, have fun with, argue with on occasion, but rarely the romantic interest. There might have been love, but it was never intimate love.

Not that there is anything wrong with being Mark Hamill/Luke Skywalker. Hamill is a successful actor who has had a long career of appearances and voice acting. And by the end of Return of the Jedi, Skywalker has developed the knowledge, skill, and confidence to take on the baddest bad guy in the galaxy. Even if he never made the final strike, Luke could have killed Darth Vader on the second Death Star.

As cool as Han Solo was, he was ineffective against Darth Vader. Vader stopped Solo's blaster shot, froze him in carbonite, and handed him to Boba Fett. All in front of Solo's love interest.

Ironically, that might have made Solo's love interest love him more. That's not a case of bad George Lucas's script writing, love works like that sometimes.

On the other hand, Jedi Masters have more acclaim in the long run than scoundrels. They are recognized across the galaxy, even if they might not make better lovers. No Jedi Master in the Star Wars movies is successful in love. Most, like Yoda, Obi-Wan, Qui-Gon, or Luke, live the life of lone warriors or priests. The only one we know who tried to balance the personal growth of a Jedi with a relationship was Anakin, and he went off the deep end.

Scoundrels, on the other hand, are ideal for love interests. After years of gallivanting, their development typically runs out of gas. They either settle down or self-destruct. While he was a bad ass in A New Hope, Han Solo is not really important in the end of Return of the Jedi. Even Ford thought the character should have been killed. In The Force Awakens, Solo is again only a vessel for the development of other characters. Comparatively, Skywalker was such a powerful character the writers had to hide him and make him the macguffin.

I'm not sure if there will ever be a Luke Skywalker love interest in the movies. There might be. Perhaps Luke will be the Jedi who retires into the sunset with a significant other. Maybe they will make Mara Jade canon.

As for me, I know I have more knowledge, skill, and confidence than I've ever had. And although the allure of young princesses has passed, I am still looking for someone smart, strong, fun, and driven. A more mature princess, one who has perhaps been through a few battles of her own. One who understands struggle and hope.

I owe that to Carrie Fisher.
Posted by Jordi at 8:55 PM No comments: