Curveball at the Crossroads available now 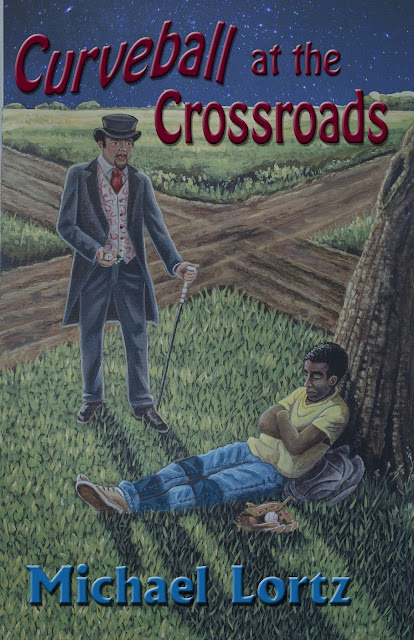 Buy Curveball at the Crossroads here.

I am super excited to announce that my first novel is now available for purchase. Entitled Curveball at the Crossroads, it is the story of a baseball player who makes a deal with the Devil after a career-ending injury. As he rises in success, he realizes eventually all deals come with a price. His deal with the Devil could cost him everything he cares about.
I worked on this book for over eight years. In 2012 and 2013, I wrote Weekly Book Updates on this site. It is interesting to go back and read my thoughts on the book from back then.
From March 2013,

I am happy to say the initial rough draft is done. And when I say it is rough, it is really rough. As a matter of fact, it is so rough I am still deliberating on one of three different titles.
(That's ok, the way I see it, Return of the Jedi was Revenge of the Jedi until a year before release. And while filming, the movie's code name was Blue Harvest. So that's three names too.)
I can however tell you what the book is about. I don't want to spoil it, but it's about baseball, the blues, the devil, the crossroads, and a deal gone wrong. It has humor, sports action, and enough mojo to hopefully keep every reader interested. At least that's the goal.
My plan now is to sit on this draft for a little while, at least until I get back to the states, then begin the editing process. There is of course a lot of work that needs to get done before I turn this draft of 120 pages and over 62,000 words of plot into a cohesive story. But such is the creative process.
I'm definitely excited.

What became Curveball at the Crossroads was initially written in 2012-2013. I edited and re-wrote a lot of it in 2013. Then I put it aside for a few years while I went back to school. In 2017, I worked on it a little bit, sent it to publishers, and received several rejection letters.
In 2020, during the height of the pandemic, when everything was closed, no sports were on, and boredom ruled, I dusted off the latest draft and began final tinkering. When I finally wrote an ending I liked, I started looking for independent Florida publishers. After a month of submissions, I found Legacy Book Publishing from Winter Park, Florida.
After finally receiving an email of interest from a publisher, I drove to Legacy Book Publishing on June 23rd, 2020. I signed a contract and we got to work on making my draft a real novel.
On November 4th, Curveball at the Crossroads was listed on the Legacy Book Publishing website. It will be on Amazon in December 2020. But why support a trillion dollar company when you dollars can support local writers and local publishers?
As always, thank you for reading and thank you for your support.
Posted by Jordi at 4:10 PM No comments: