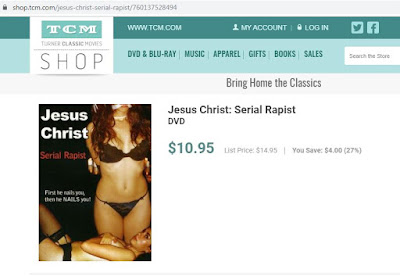 Many movies have been made about Jesus Christ. From the annual Easter movie to Passion of the Christ to The Last Temptation of Christ to Jesus Christ: Vampire Hunter, the story of Christ is a frequent one of filmmakers.

Many of these movies are classics - ok, maybe not Jesus Christ: Vampire Hunter. The story of Jesus is typically handled with care and reverence.

But there are always filmmakers who reverse reverence. Those who spit on sacrilege. Who push the boundaries of society beyond shock and awe. They are needed and welcome so we don't take our man-made messages too seriously.

Sometimes these filmmakers take on the Jesus story.

A few weeks ago, I discovered underground film director Bill Zebub. Zebub makes low budget horror with titles such as Night of the Pumpkin, Antfarm Dickhole, and Nightmare on Elmo's Street. In total, Zebub has made over 60 movies since 2002. He is prolific.

But Zebub's most controversial film is a take on the Jesus story entitled Jesus Christ: Serial Rapist. According to IMDB, the subject of the movie is:

"A schizophrenic man who believes he is Jesus kidnaps women who refuse to believe his delusion He videotapes himself with these women he has tied up in various states of bondage. He sends videotapes to the media labeled "Gospels of Blood," which are just photographs of naked women in bondage, usually crucified in some way, with the camera panning and zooming over the photos. These photographs account for more than half of the running time. There is no diegetic sound, only a few title cards, although there is a soundtrack of heavy metal music."

According to reviews on IMDB, Jesus Christ: Serial Rapist is not very good. One reviewer writes:


"Do not buy this film. Don't even watch this film unless you want to be bored to death. And most importantly - DO NOT LET THE TITLE FOOL YOU!!! This "film" has absolutely nothing to do with Jesus raping anyone, so all you exploit fans that got boners after hearin' the title of this one might as well just tuck your dicks back in your pants. Here's what Jesus Christ: SERIAL RAPIST is REALLY like:

Some jackass (that I think is the director of this mess) has a soft-core "rape" scene, where the "victim" involved looks so utterly bored that it looks like she would have been more disturbed by watching paint dry. Some text pops up every now and then explaining the "plot" (which has nothing to do at all with anything portrayed in the film..) about a "schizo" who thinks he's Jesus and decides to videotape naked women for no apparent reason and send the tape to the cops...right. Then we're treated to a bunch of soft-core nudie stills - for like forty-five minutes - and all of this is set to some extremely dull and drony goth-metal soundtrack. There is no dialogue, no "acting", no nothing..."

I wonder if anyone at Turner Classic Movies knows Jesus Christ: Serial Rapist is listed on their site. I wonder how or if they monitor contributor content.

Perhaps this was the doing of Bill Zebub, sticking another stick in the eye of social convention. Well played, sir. Well played. 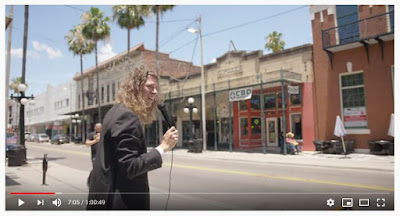 This dichotomy is the essence of Jacobs's new movie, Steak Break. On its surface, the movie is about a performer testing his abilities in an entertainment district and hoping to raise enough money in passerby contributions to buy a steak at a local restaurant.

But the movie and Jacobs's purpose is far deeper. Between clips of Jacobs telling jokes, dancing, singing, dribbling a basketball, and attempting skateboard tricks is an inner dialogue Jacobs has with himself, questioning the purpose of the endeavor. Is he really there to raise money for dinner? Or is he trying to test the limits of his skills by performing for hours on a street corner? Or is he trying to better understand the psyche of his audience and what they will pay for? How much is performance art really worth?

Although the movie never mentions how long Jacobs performed on the streets of Ybor City, we can assume from the background that he was there for at least 8 hours. He starts in the middle of the day as passerbys are either tourists or people on their way to or from work, many of whom can't be bothered by the guy singing on a corner. By the end of the movie, he is engaging with barflies and club goers, some of whom take over his role with their own antics.

Somewhere in between - I believe it was near or after 8pm - I crossed path with Jacobs while on my way back from dinner. By then, he was joined by fellow local comic Clark Brooks. My interaction with Jacobs and Brooks is in the movie at the 42:00 mark. 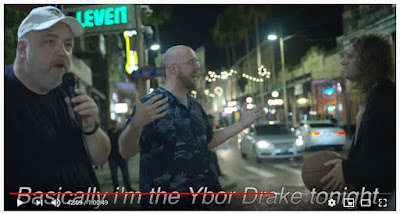 Jacobs engages with many interesting characters, from a lady in a wheelchair who says he is great, to a freestyle rapper, to a young couple who got engaged moments earlier. By the end of the movie, their stories and interactions become almost as much of a story as Jacob's quest to earn money for food.

Following his interactions with Ybor City's nightlife, Jacobs finally calls it a night. He then checks his hat to see how much he received for his hours of performing. Did he make money, and if so, was it enough for a steak? If he did make enough money, did the buy the steak?

Was the endeavor worth the trouble?

Steak Break The Movie is a film about a quest. A quest to make money, a quest to test the limits of human performance, and lastly, a quest to determine the value of art. For these, Jacobs doesn't have to be good. He just has to endure.

Watching Steak Break, I wondered how the movie would have progressed if one passerby dropped a $100 bill into Jacobs's hat in the first hour. With $100 Jacobs could have bought multiple steaks. Had this happened Steak Break would not have been as interesting. Without the struggle, Steak Break probably would have been boring.

And while he may or may not be a genius, John Jacobs is anything but boring.

Watch Steak Break The Movie below:

Last month I had the awesome opportunity to see comedian, writer, actress, and activist Cristela Alonzo live in Tampa. She was hilarious. Afterwards, I bought her new book and gave her a copy of mine. We both signed our respective books for the other. Very cool moment. 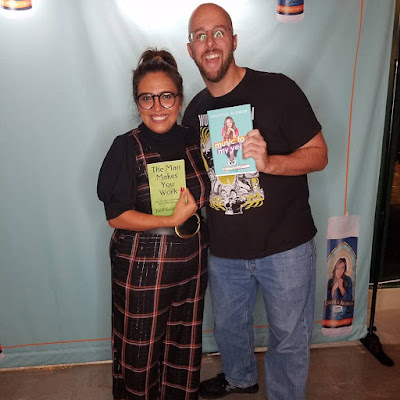