PowerPoint Platforms and Coming Back to Comedy

I did stand-up comedy years ago. I wasn't very good. I wasn't very good because I didn't do it enough to be good. But like most comics, I got better as I went along. I was terrible in Tampa, ok in Ocala, and got a few laughs in Lakeland.

Then the bombing Afghanistan happened.

That was 2012. I have barely been on stage since. I like to say I left Afghanistan with PTSD - post-traumatic silence disorder. That's what happens when a comic gets so shook after a bad set they never get back on stage.

But a recent article in Vulture.com made me think that maybe in 2019 is the year I return to comedy.

Entitled "Why is PowerPoint Having a Comedy Moment?", the article discusses how several comics are blending PowerPoint presentations into their sets. I am great at PowerPoint. I can do that.

I know, I know. Comedy is about being funny first, props and gimmicks second. Comedy isn't a TED Talk, the audience should be focused on the performer, not words on a screen. But that's when I'll make a slide with a big arrow pointing back to me. The eyes of the audience will follow the arrow back to me. Easy as microwavable pie.

As a medium, PowerPoint is easy for comedy. Every slide can build suspense opening the door for a visual twist. Images also keep people interested if the comic is not. Slides give the audience something read.

And I've already made a presentation that is perfect for comedy: my Guide to Winning a Woman's Interest.

To date, this video has only has 177 views on YouTube. But what if I brought it to comedy shows? What if my entire YouTube channel was filled with funny presentations?

Comedy is calling me again and my perfect platform is PowerPoint.
Posted by Jordi at 2:30 AM No comments:

Thoughts on the AR-15

The AR-15 is perhaps the most polarizing weapon in a very polar gun-control debate. It has been the weapon of choice for several mass murderers in the United States over several years. According to Wikipedia, it was used in the 2012 Sandy Hook Elementary School shooting, the 2015 San Bernardino attack, the 2017 Las Vegas shooting, the 2017 Sutherland Springs church shooting, and the 2018 Stoneman Douglas High School shooting. As well, the Pulse Nightclub shooting was conducted with a weapon very similar to the AR-15.

The weapon is popular - both with collectors and those with bad intentions. According to experts cited by the New York Times (it would be nice if they put a name to at least one expert, by the way), "there are easily several million in the nation’s rifle racks and gun safes".

But is it really needed? Do we really need millions of rifles in the hands of private gun owners across America?

According to gun websites, we do. Here are screenshots from a late 2017 article on the TheTruthAboutGuns.com. 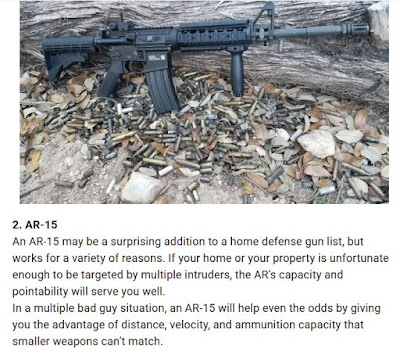 The rest of the top 10 were 8 pistols and a shotgun. While there is no arguing the presence of a firearm can help home defense if used by someone who knows what they are doing, and there is no arguing that the "intimidation factor of a pump action shotgun can’t be overstated" as the article says (shlack-lack), why is an AR-15 on this list?

According to the article, "If your home or your property is unfortunate enough to be targeted by multiple intruders" it is best to have an AR-15 handy. Does this happen often enough that the rifle has to be number 2 on the list? Are there groups of robbers and home invaders breaking into houses throughout America?

Also in the description, "In a multiple bad guy situation, an AR-15 will help even the odds by giving you the advantage of distance, velocity, and ammunition capacity". Are gun owners defending their homes or guarding the front lines at the Battle of the Bulge? If the average size of an American home is 2,600 square feet (792.5 meters) with walls, do gun owners really need a weapon with a maximum effective range of 400 meters to 1 mile (1,609 meters), depending on the configuration and ammunition?

According to a 2013 article entitled, "Gun Control Myth: The AR-15 is Not Actually a Hunting Rifle" by Matt MacBradaigh,


In reality, AR-15's make excellent hunting rifles and are normally used for that purpose. They are configurable via a separate upper and lower part that make it possible for the user to configure the rifle for various types of bullet cartridges. Depending on what game is being hunted, and what bullet the rifle is configured to fire, virtually all AR-15 rifles are useful for hunting.

Can a weapon be good for home defense and hunting? Or is there another reason for the weapon's popularity? Could the answer be in the home defense ranking article?

Look again at the first picture. Notice the ads? Both ads are for accessories for an AR rifle. There are many parts gun owners can add to the AR-15 "platform" that increases distance or power. Smaller weapons such as pistols don't have as many parts to add on as larger rifle platforms. Selling these parts are big business. The companies that sell the parts rely on the sale of the platform and their ads to continue their revenue.

The parts companies want to sell more parts, so they buy more ad space for parts on gun websites. Those sites see where the ad revenue is coming from and promote the applicable weapon in an effort to increase the sale of weapon and then tell the advertiser that the ads on their sites are working. Then the website can increase the cost of advertising on their site.

All the website needs is text to pitch a need to gun owners that fits the narrative to support the website's ad selling business.

Like most internet business, selling AR-15s is a shell game based on ads and marketing. Seeing through propaganda is important if societies want to have rational debates about the safety and practicality of purchasable products.
Posted by Jordi at 6:01 AM No comments:

L1ZY and the Artificial Intelligence Takeover

In the horrifying yet possibly soon-to-be realistic film by Ghost+Cow films, a home assistant named L1ZY assists a household a little too much.

Personally, I refuse to buy a home assistant. I don't want an Alexa, a Siri, or anything else that can record my voice and the voice of those around me. Having a smart TV is scary enough. My goal in the near future is to learn how to firewall my house so no signal can get out or in without me knowing about it. That would prevent my toaster, refrigerator, or toilet from telling a data server about my habits.

"Michael, your toilet says you have been using a lot of toilet paper recently. I've ordered some from Amazon, but should I also contact your doctor? And from the change in atmospheric pressure in the house, you have also been passing a lot of gas. Should we order Gas-X as well?"

I am far from a Ludite, but I draw the line with allowing AI into my house. L1ZY is why.
Posted by Jordi at 2:45 AM No comments: