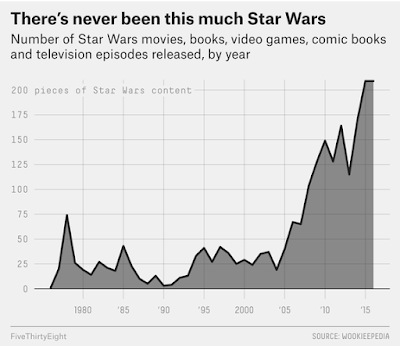 Finally taking a moment to write about one of the best Star Wars articles I have ever read: FiveThirtyEight's 2016 "Star Wars Killed a Universe to Save a Galaxy" and to comment on the above chart.

I was born the year Star Wars hit theaters - the far left of the above chart. It was just "Star Wars" back then - no one called it "A New Hope". Hope wasn't the word, phenomenon was. Star Wars was the biggest phenomenon on the planet, smashing cinema records across the globe.

By the early 1980s, I was growing up in a Star Wars world. The Empire Strikes Back was one of the first movies I saw in the theater. I don't remember it, but it set off a cascade of Star Wars commercialism and fandom. Within the next few years, I had action figures, space ships, magazines, patches, shirts, bed sheets, lunchboxes, place mats, plates,  cups, birthday cakes, desk lamps, books, LPs, cassettes, breakfast cereal, Halloween costumes, and dozens of the old Marvel Star Wars comic books.

I saw Return of the Jedi opening day. I had The Ewok Adventure and Battle for Endor on VHS, and watched the Droids and Ewoks cartoons.

Although I had some GI Joe and some He-Man, I was all into Star Wars.

By the mid-1980s, however, Star Wars began to fade in popular culture. And in my suburban Long Island town, the New York Mets were the big thing. They had Darryl Strawberry, Dwight Gooden, and were World Series champs. Luke, Han, Leia, and Chewbacca took a back seat to playing pick up baseball and following the Mets. The Mets were cool and Star Wars was old news.

When I moved to Florida in 1987, I bonded with kids over baseball. No one liked Star Wars. Star Wars was yesterday's movies, a trilogy that had run its course in pop culture. It was during this time that I put my fandom in carbonite.

A few years ago, I wrote about how deep froze my fandom was for over 10 years.


All through junior high, high school, and my four years in the military I suppressed my Star Wars fandom for what could only be called “the sake of fitting in”. Like most people who struggle with social acceptance in junior high and high school, I definitely didn’t want to be an outcast. In the military, with it’s alpha-male heirarchy, sci-movie geekdom is not looked highly upon – although I did hang with some folks who were fans and we did wait in line for three hours to see Episode 1 the night it opened.

Junior High to my military days were 1993 to 2000. After I bought the Timothy Zahn novels and the Dark Empire and Old Republic comics, played X-Wing, Tie Fighter, and Dark Forces on the PC, and had other toys and media.

But the Star Wars drought (1987-1993) was at a weird time for me. A time when social circle mattered, when sports and girls took precedence, and despite a few books and a few video games, there really wasn't much out there to invigorate my fandom.

It was a dark time for the Rebellion.

This is one of my "in my day, we trudged the ridges of Hoth barefoot, uphill both ways" stories. I am glad Star Wars is so tremendously huge these days. I am glad the galaxy is so big, so many people can find their niche and create more stories. I am glad I can share my fandom with the next (and even next after that) generation.

I will be very curious to see if Star Wars ever goes through another 10 year drought. I seriously doubt so, at least during my lifetime. Star Wars is now in company with older mythology in universe creation. Star Wars my be owned by Disney, but it is bigger than Disney. It may even be bigger than Greek or Roman myths in regards to popularity. There may be times when people dust off the Original Trilogy because they haven't watched the Skywalker story in decades. There may be a time when the Skywalker Saga is just one of many different chapters in a grand epic collective story of a galaxy far, far, away.

And when human civilization dies off, and real aliens discover Earth, and uncover our myths and legends, I wonder what they will think of our imaginations.
Posted by Jordi at 2:39 AM No comments:

6 Months in Qatar – The Adventure Continues a little bit longer 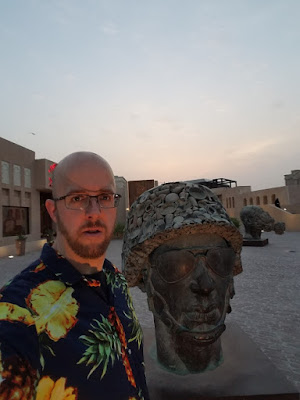 As many of you know, when I took this job and originally planned this trip, it was supposed to be for 6 months. As I have mentioned in previous posts, circumstances out of my control changed. When the position they said would be in Tampa disappeared, I began considering staying in Qatar a little longer. Not quite a year, but a bit more than 6 months.

That extension has officially turned into November – nine months from my departure date. But home for the holidays and the end of college football season – one of which may be more important than the other.

This is a far different extension than my previous times working with the military. As I mentioned, I live in downtown Doha, a city of 3 million people. I visit museums, eat at new restaurants, see shows and events, and have new friends in the city. I am a temporary expat staying a little longer to save some money for my next career move.

I have 3 months to find a new job – either with my company or a new company. Time to update the resume and see what catches my eye. My goal is to either have something secured or close to secured by the time I leave Qatar. Long distance interviews may be tough, but that’s what Skype is for.

But enough of what I need to do to pay the bills, here is what I have been up to over the last month:

In late July, I visited the Katara Art District. Qatar has a lavish, well-built art district with an opera house, theater, art exhibits, and an amphitheater. And it is on the coast of the city. I spent an entire afternoon there taking pictures.

The next week, I returned to the Islamic Museum of Art I visited a few months ago. At that time, a sandstorm was covering the city. This time I was able to get a few outside pictures. It too is on the water, leading to some very scenic shots.

Here is the link to all my pictures. As usual, start at the bottom. There are now over 300 pictures from my trip.

Last but not least, I started driving. I received my license last month and have been taking to the roads. Once you get the hang of it, aggressive driving isn’t really intimidating. You just have to act fast.

Although I didn’t sightsee much this month – I have a few plans upcoming – I did see something that absolutely made my month: I found real Florida Orange Juice in a grocery store. Global imports are a great thing. Qatari orange juice is ok, but it is not Florida Orange Juice. I was so excited, I bought two bottles. And I will definitely be back for more of a taste of home.

Well, that wraps up another month in Qatar. As the old school hip hop song said, I’ll be gone till November. Meanwhile, the hot months are almost over and soon events will be happening in Qatar again. And I will keep writing.

Thanks for reading.
Posted by Jordi at 1:30 PM No comments: