The Man's Influence on Sports 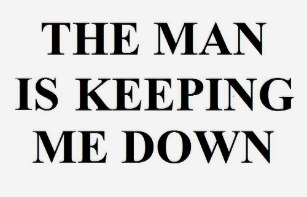 Many moons ago, in the dawn of the Internet, there was a web site called The AfroSquad. The AfroSquad was a group of funky fresh individuals who warned us about "The Man" - that all-powerful, all-knowing personification of authority. According to CrazyMan of The AfroSquad,


"The Man" is an intangible bugaboo that masterminds the hardships and tragedies of that thing we call life. Being technologically superior, he can morph into anything he wants- your boss, the local authorities, the president, your parents, a lawyer, the guy that signs your inadequate paycheck, etc. You can use that last sentence as a mad-lib for added effect.

When you work 13 hours, come home at 8:00PM to realize that you locked your key in the apartment- blame it on "The Man"- because he made you do it. When it takes another 2.5 hours to get some scab to open your apartment door for you- blame it on "The Man"- it is all his fault. When the scab requires 20 bucks to open your apartment door, beat the crap out of the scab, because he is "The Man". But defiling the scab/"Man" apparition will be to no avail because, by the time your finished teaching the scab 'the true meaning of sorrow', "The Man" will be somewhere else already- probably stealing your loved one's monogamy.

But don't be fooled, "The Man" can be in multiple places at once just as easily as you eat a Twinkie in just four bites. He can simultaneously be controlling the red stoplight you run, in his secret hideout faxing your brain the endorphins that result in deviance, AND in the cop car that catches you do it.

Just about the time things started going global and the whole world went online, The Man pulled the plug on the AfroSquad. For years, there was no AfroSquad on the Internet. Only recently has there been a resurgence of AfroSquad videos on YouTube and ifilm.com.

With the AfroSquad at bay, and their recent videos looking more like SNL skits than public service announcements, The Man has continued his shenanigans. Sadly, in no area is The Man's presence more evident than in the wide world of sports.

As my own PSA, I am beginning a list of things The Man does or tries to get away with in the world of sports. It's a short list, but hopefully we can raise awareness in an attempt to vex or befuddle The Man. If I am missing something utterly significant, leave a comment or e-mail me at theserioustip@yahoo.com. Gracias.

-The Man likes those few days around the MLB All-Star game when no sports are on.
-The Man likes night baseball, Astroturf, and the DH.
-The Man wants all celebrities in New York to become Mets and Yankees fans at the same time.
-The Man thinks all games the Yankees aren't favored in should be rained out.
-The Man thinks it's "shocking" that anyone could win the World Series besides the Yankees.
-The Man calls Harlem Globetrotter wins "shocking".
-The Man loves Derek Jeter.
-The Man holds career minor leaguers down.
-The Man likes the idea that the winning league in the MLB All-Star game gets home field advantage in the World Series.
-The Man let the dogs out.
-The Man wants a NASCAR channel to replace the NFL Network.
-The Man actually only disliked Rod "He Hate Me" Smart.
-The Man wants to make a 24-hour celebrity poker channel.
-The Man wants Allen Iverson to practice.
-The Man runs the BCS.
-The Man raises ticket prices.
-The Man hated the Negro Leagues for all the wrong reasons.
-The Man wants all stadiums everywhere to be named after obscure companies. Even little league fields.
-The Man owns a Yankee and Red Sox hat and wears the one with the better record.
-The Man wanted Canada to win the World Baseball Classic, eh?
-The Man hates college basketball and their "Cinderella" teams.
-The Man picks Duke to win every night.
-The Man cheers for rain on opening day.
-Namath is an anagram for the Tha Man.
-And The Man absolutely, positively, without a shadow of a doubt HATES blogs. Especially sports blogs.
Posted by Jordi at 9:03 AM 1 comment:

Bloggin’ Through the Ages (Everyone Loves a Blog)

Let me pause for a moment from my normal rants and raves about sports and culture and take an introspective look at what I am doing here. Not introspective as in “what is my purpose in life?” or “why do people still remember Kato Kaelin or Clara Peller?” but introspective as in “what is this blog thing you speak of?”. Although this train has been a rollin’ for quite a while, I think it’s high time I took a look at the phenomenon of blogging, or Weblogging, to use its original name.
Thanks to Al Gore’s Internet and the Freedom of Speech, we have arrived at a time where most everyone can express themselves for the world to read (everyone of course, refering to those with computers and internet connections – you know, the civilized among us). From documenting the battles of war to analyzing the intricacies of college lacrosse to discussing the drama of the 9th grade dating scene, many people have taken the opportunity to type their piece and “publish” it for the world to read.
But imagine this phenomenon at an earlier time. How different would history have been if we had people blogging their thoughts on events through the years?
Take, for example, this prehistoric blog found on a Commodore 64 in the caves of Western Europe: – Went hunting today for a bit. Decided not to draw on the walls like everyone else. I hate art. Maybe one day those Neanderthals will understand my idea of writing. But anyway. Gotta go. By the way, its getting a bit cold. Its been -38 degrees all year. Hopefully it warms up. Later.
And this blog from old England: – Saw that Shakespeare guy the other night. Do ye a favor and do not go to see his plays. They are a complete and utter waste of time. Romeo and Juliet both die. Where is the drama in that? And his women characters? They are boys dressed as women. What a rip off. And when I walked out early, did they give me my shilling back? Not at all.
And could this blog have changed history? – Hi world. My name is Adolf. Although I am not a big fan of Jews I think I am going to voice my opinion on here to let my stresses out. They iritate me so much! They need to go away. Move out of Germany, you Jews. My family thinks by me letting out steam on this blog I will be a more happy-go-lucky person, and I think they are right. So sorry about being so anti-Semitic but I gotta go. Peace and God bless.
Through their accessability and resulting impact, blogs have become our online diaries of sorts, accurately revealing the perspectives of today. Quite possibly even to a level of over-saturation. But those I feel truly sorry for with this blogging phenomenon are tomorrow’s literary historians. Whereas in the past, they had only the works of the literate minority to shine light on culture and popular life, with today’s “blogosphere” they will have an infinite clutter of information to sift through. How might a future historian determine what sources and opinions define the 21st century? In a strange way maybe the question is its own answer. Perhaps blogs have become our culture – a society defined by its freedom of expression, modern communications, and self-importance but with little to no restraint, moderation, or the substance of a defining voice.
Posted by Jordi at 2:30 AM No comments: