The Life and Times of Big Jelly 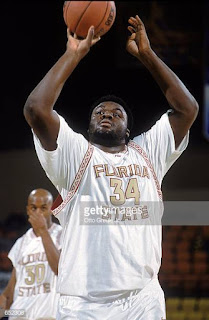 With baseball season over and the Florida State football season begging for a merciful end, it is time to take a look at one of the last bastions of pure sports integrity - pro wrestling. Just kidding. I speak, of course, of college basketball. And how better to conjure up the spirit of Cinderella than to profile one of the largest, most underappreciated characters to take the court in recent times: Nigel Dixon, center for Florida State University (1999-2002) and Western Kentucky (2003-2004).

Nicknamed "Big Jelly" because of his tremendous size (nearly 7 feet tall and at times near 400 lbs), Nigel arrived at Florida State under the tenure of Head Coach Steve Robinson. According to The ACC Area Sports Journal, "massive center Nigel Dixon was an unheralded, high-risk signee." Despite this less than glowing review, Dixon became a crowd and campus favorite and his "Big Jelly" nickname was voted best in college basketball by the editors of the Sporting News. Even his attire quickly became fodder for legend as he was fitted for "Nigel sized" shorts.

But size alone does little beyond attracting attention. Big Jelly had to prove his worth on the court. From the moment he stepped onto the college hardwood, Nigel was able to vastly improve his conditioning, lose over 100 pounds, increase his athleticism, and begin to grasp his potential as one of the preeminent big men in the Atlantic Coast Conference. After a disappointing freshman season, in which he averaged only 1.8 points, 2.1 rebounds, and 6.4 minutes a contest all off the bench, Nigel became a starter during his sophomore year and averaged 6.7 points, 5.0 rebounds, and 14.7 minutes per game. Among the highlights of these first years were a season-high 12 points versus Duke during the 1999-2000 season and 23 points and 10 rebounds against Rhode Island in the 2000-2001 season.

Big Jelly would take a big step towards the next level in the 2001-2002 season. Again starting over 75% percent of his games, the mammoth center led the Seminoles in rebounding with 6.4 per game, averaged 8.1 points per game and shot 49% from the field. Among the highlights of his season were 15 points and 10 rebounds against eventual National Champion Maryland and a similar performance against Virginia. He also played a key role in one of the most shocking upsets in Florida State basketball history, a 77-76 victory over then-number one ranked Duke.

Alas, the emergence of Big Jelly as an ACC force to be reckoned with at FSU would end with the hiring of new head coach Leonard Hamilton. Depending on which side of the story you believe, the Nigel Dixon Era at Florida State ended because Hamilton prefered long, athletic, swing players who could play a more up-tempo game or because Big Jelly wanted a redshirt year, something he was denied under Robinson. As dark clouds covered Tallahassee, Nigel "Big Jelly" Dixon moved on to Western Kentucky University.

After being a transfer redshirt for the 2002-2003 season and slimming down to svelte 320 pounds, Big Jelly would become "Big Firm" at Western Kentucky. As a relative unknown to the Sun Belt Conference, the new and improved Nigel Dixon was the only player in the conference to average a double-double with 15.9 points and 10.3 rebounds per game. Among the highlight of his breakout year included a league-high 15 double-doubles and career highs in steals, assists and blocks. In one game against Marshall, Big Firm had 29 points and 16 rebounds. In another contest against Ball State, the big fella scored 23 points and grabbed 16 rebounds. Nigel Dixon had become unstoppable.

With such a monster season, Big Jelly/Big Firm achieved national attention and won numerous accolades, including First Team All-Sun Belt Conference, Newcomer of the Year and Sports Illustrated Honorable Mention All-American. Would the NBA be the next step? Could Big Firm bang bodies with Shaq or Yao Ming?

Despite claims that Dixon was a poor ball-handler for a big man, and would "challenge Chris Dudley as the worst bricklayer in NBA history", the Detroit Pistons signed Nigel on October 1, 2004. Dixon played in three preseason games with the Pistons, averaging 1.3 points and 4.0 rebounds in 12.7 minutes. Unfortunately, with All-Star center Ben Wallace and potential star Darko Milic, the Pistons released Nigel Dixon after 18 days.

After being released by Detroit, Nigel Dixon brought the Big Jelly/Big Firm Show to Greece, playing for MENT Vassilakis in the Greek Basketball League. While in Greece, Nigel only played in 11 games and recorded a disappointing 4.1 points and 4.8 rebounds per game. Although his performance in Greece was not to the level he had achieved in America, the Denver Nuggets took a chance and signed Dixon on September 30, 2005. His stay with the Nuggets lasted less than a month, however, as he was released on October 26, 2005.

Less than a week later, in early November 2005, the Fayetteville Patriots of the NBA Developmental League, seeing the talent that made him a Western Kentucky star, made Nigel the second overall pick in the NBA Developmental League Draft. Sadly, the Big Jelly/Big Firm Era in Fayetteville was over rather quickly, as Nigel left the team on November 22.

When last seen, Nigel Dixon was plying his craft in the Korean Basketball League for the Pusan Magic Wings and making the Korean International All-Star team. With any luck, the powers that be in the NBA will realize the massive talent, drive, and determination in Nigel Dixon and the "Big Jelly/Big Firm Experience" will be playing in an NBA city near you.
Posted by Jordi at 6:16 AM

And just from a fellow Hilltopper, He is a rather nice guy too. Best wishes to Big Red's Big Firm.

Cool blog. I'll be keeping especially close attention to any Mets posts. Glad to see we have that in common along with the 'Noles!

He is still thought of fondly here in Tallahassee. Just the other day my wife was asking what happen to him. Thanks for the update!

He is a very talented and sweet guy.