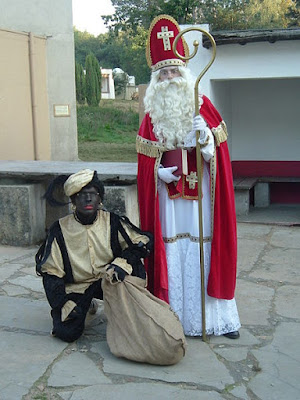 Here's a few things going through my head as I watch the highlight of NORAD's year.

In Defense of Scrooge 1 and In Defense of Scrooge 2- Some interesting takes on how ol' Ebenezer got a bad rap. Personally, I think it's curious how people spend all year pinching every penny, touting big business, rooting for how great capitalism and social Darwinism is, bemoaning Scrooge, etc. but come Christmas time they temporarily put that aside, whip out their philanphropic side and make an effort to be the most giving souls on Earth. How about showing that all year round?

A note on Peace on Earth: If we really had Peace on Earth, do you have an idea how many people would be unemployed? We wouldn't need a military, military contractors, military lobbyists, supporters, etc. We wouldn't spend our money on weapons and radars and missles and the like. We would have countless more unemployed youthes wandering our streets, washing our windshields, begging on streetcorners, or resorting to a life of crime. Do we really want that? So next time you wish for Peace on Earth, think of the soldiers, airmen, sailors, or Marines whose very livelihood depends on a certain amount of unpeaceful chaos.

Speaking of conflict, William Loren Katz of Counterpunch.org remembers the Christmas Eve 1837 battle between the Seminole Indians and the U.S. military. It was one of the first victories for the Seminole Nation and an important milestone in their reputation as the "Unconquered Tribe". (Note: My esteemed alma mater makes a big deal of the whole "Unconquered" thing.)

Anyway, I'll be back tomorrow with a special toast and a big announcement, but in the meantime, hopefully Santa is good to one and all and here's hoping his little buddy Black Pete doesn't show up and kick your ass.

If you're gonna mention Scrooge, you gotta give a nod to Bill Murray.