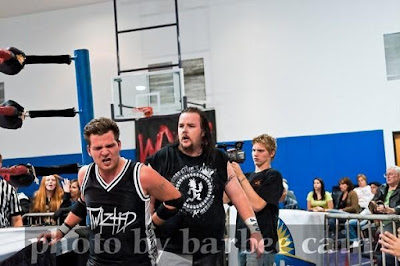 I have to admit, I've had the interview sitting on the shelf for a minute or two. I was looking for a more mainstream place to post this, but after negotiations with other forums feel through, I figured I would post it here. Enjoy.

Jordi Scrubbings: How did Ethan Essex get his start in pro wrestling?

Ethan Essex: Growing up in Delaware, I had a lot of exposure to it. You had all kinds of fresh little indy shows that me and my friends would go to all over. You have ECWA in Wilmington run by legendary promoter Jim Kettner, and you had Delaware Championship Wrestling out of the Southern Delaware area. Maryland Championship Wrestling has been running all over Maryland for quite a while and it was only a 20 minute drive to Philly. Every three weeks, ECW (Extreme Championship Wrestling) would return to the Arena for television tapings. I would be there every taping chanting “EC'dub” so loud that my voice would be gone at school the following week. When ECW closed, that spot was filled by CZW, ROH, 3PW, and WXW and so on later on in my teen years. And of course watching WWE and WCW.

All I ever wanted to be was a Professional Wrestler. How could you not with all these great companies around me? So I began training with Jeff Rocker at DCW (Delaware Championship Wrestling, now Dynamite Championship Wrestling out of Dover, DE) and had been doing ring announcing duties. I had some issues come up in my life and had to move to Florida. Jeff Rocker recommended I continue my training with Bam Bam Mancuso and Florida Extreme Wrestling. It is there that I met and worked out with fellow Hatchet City All-Star and brother Bryan Maddox and another one of my good friends inside and outside of the wrestling world, Nooie Lee.

JS: Where are you currently wrestling?

EE: Currently, Maddox and I are wrestling for WWE Hall of Famer Afa the Wild Samoan's WXW (World Xtreme Wrestling) and are the 4-time WXW World Tag-Team Champions! How fresh is that?

JS: Who are your wrestling influences?

EE: Owen Hart, Sean "X-Pac" Waltman, Shane Douglas, Raven ... I really could keep on going with guys that influence me. There is so much talent that never really got credit or pushed as main guys, but ran with it when given the right booking. They were always more over with me than the top guys.

JS: You and your partner in the Hatchet City All-Stars, Bryan Maddox, come out to Psychopathic Records Artists Twiztid and wear Insane Clown Posse garb in the ring. What does ICP and representing the Juggaloes mean to you?

EE: I love the Juggalo Fam. Straight up. It’s the one place I know I can turn when life is down and out and somebody is like, “Man, go get ya shine on in this piece”. I've been listening to ICP for almost as long as I’ve been watching wrestling. I’ve been a Juggalo even longer. I can't say we represent juggalos, if anything they represent us.

JS: How accepting has the ICP community been to the Hatchet City All-Stars?

EE: We always get love from the Family when they come out to shows. Except at Gathering of the Juggalos last year. Bryan and I were tagged up with Trent Acid for Juggalo Championship Wrestling.

On a side note, Trent was a really cool guy and learned a lot from him. I’m glad he and I got to cross paths. RIP Trent. The party might be gone but it’s certainly not dead.

Back to the Gathering, we were tagged up as Trent’s Alter Boys against ICP, (former WWE legend) Scott Hall, Sid Vicious (aka Psycho Sid, Sid Justice, etc), and Corporal Robinson. Now all weekend guys like Sabu and Mad-Man Pondo and Ian Rotten were coming up and telling Bryan and I to watch out for trash flying at us from the crowd. Here are some legit tough guys and they are telling me to be careful of the fans?

Anyway, the Juggalos got rowdy and since were aligned with the top heel in the company we needed to have eyes in the backs of our heads. Well, let me tell you the Juggalos didn't disappoint. All kinds of stuff were thrown at the ring that night. From chairs – the poor ref took a chair from a fan in the back of the head and it cut him – to hundreds of two liter bottles of Faygo Pop. I got nailed with an empty Faygo bottle and Maddox and I narrowly escaped a diaper. It was like a landfill come to life!

JS: What was your best match ever?

EE: I have had some good ones and I’ve had some bad ones. But my best singles match would have to be against a kid named Freestyle. A lot of other workers had come to that show. I felt like I had something to prove to them and we tore the house down. That match was a very important match to me – there was a lot of back story, but that’s a whole other thing in itself.

EE: Hulk Hogan, hands down. If you’re wrestling Hogan then you’re in a good spot.

As far as tag-teams go, I think Maddox and I would agree on Owen Hart and Davey Boy Smith.

JS: What is your greatest accomplishment in wrestling?

EE: We recently captured the WXW World Tag-Team Championship for the fourth time. That’s a record for that company and we feel honored and privileged to hold that record. Also performing in front of 20,000 Juggalos with ICP will always go down as a top moment.

JS: What does the future hold for Ethan Essex?

EE: If the past four years have taught me anything, it’s that nothing is promised. It’s what you make it. So we'll see. Good things I hope.

JS: Would you like to say anything to the fans?

EE: Thank you for the support you guys have shown us. It blows my mind. We need you as much you need us. Whoop Whoop.

JS: Where can we see more Ethan Essex? Do you have a website?

EE: The Hatchet City All-Stars page is under construction, so in the meantime fans can find me on Myspace at myspace.com/jayicon01
Posted by Jordi at 6:09 PM