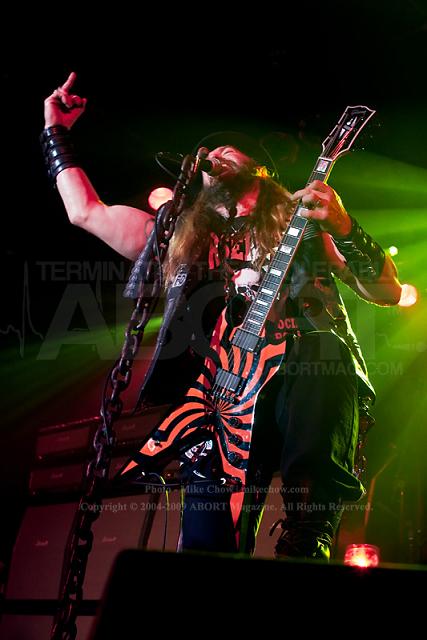 Another fortnight, another concert.

Two weeks after seeing Duck Down Records and some of the best names in underground New York hip-hop, I went to Orlando last Tuesday to see two of the best guitarists in heavy metal, Zakk Wylde and Alexi Laiho, frontmen of Black Label Society and Children of Bodom, respectively.

Wylde, Lahio, their bands, and supporting acts Clutch (one of my favorite all-time bands) and 2Cents were all part of the Black Label Society-fronted fall 2010 Berzerkus Tour.

For those who follow my blog regularly, you know it’s been a while since I saw a good metal show. Since January, when I saw Obituary in Tampa, to be exact.

Now I’ll admit, I’m a bigger Clutch fan than Black Label Society fan. I was introduced to Clutch first, have all their albums, and didn’t get into BLS until a few years ago. And although I’d heard of Children of Bodom, I had never heard any of their songs. But I knew of Laiho’s reputation as one of the best living guitar players so I was excited about seeing him play.

After meeting up with professional wrestler Bryan Maddox outside the Orlando House of Blues, we walked in at about the middle of 2Cents’ set. From what I saw, 2Cents wasn’t bad, they were just sorta generic. They were loud and heavy, which made them a good opening act, and maybe if I knew more about them, or heard of them before, I might have been more into their songs. (Although they did cover a Pantera song – kudos to them for it not being “Walk” or “Broken” or anything else on the Pantera’s greatest hits album.) As it was however, I was grabbing a beer and getting settled in.

Next on stage was Clutch. I was surprised they were before Children of Bodom, as the billing had Clutch below BLS with Children of Bodom below them in a smaller font. But considering the crowd and the heavy metal environment, Clutch fit better performing second in the lineup.

Even though I have seen them four times before, I’ve never been disappointed with a Clutch show. With a catalog as wide and diverse as they have, from heavy metal to groove-based metal to bluesy, Clutch can fit on most rock billings. In Orlando, their playlist consisted of their heavy rock songs from their latest six albums, from Jam Room to Strange Cousins from the West, and even one off their side project, the Bakerton Group’s El Rojo. Although they don’t have the guitar acrobatics of the other bands, Clutch’s heavy groove definitely rocked the crowd.

Following Clutch was Children of Bodom. Like I mentioned, I had never heard a Children of Bodom song before and didn’t really know what to expect. All I knew was Laiho had a reputation for being a beast on the guitar. That reputation is definitely deserved. He was phenomenal. With his small frame and blond hair, he reminded me a little of Dave Mustaine of Megadeth, although a lot better guitar-wise, where he reminded me of a metal version of Eddie Van Halen. Lyrically however, I could barely understand a word Laiho said. I’m not even sure if the songs were in English or if they were sung in the usual vocal tone of death and black metal.

Despite not following along lyrically, I’m definitely acquiring some of Children of Bodom’s music soon. Although I am big lyrics person (being a writer and all), I was that impressed musically.

Last but not least was the headliner of the show, the always brutal Black Label Society. Zakk Wylde and crew were absolutely awesome. While they played songs off their latest album Order of the Black, they also played some of their more popular songs, to include “Suicide Messiah” and “In This River”, the emotionally stirring tribute to Dimebag Darrell.

(Check out the setlist here and youtube clips of "Stillborn" and "Godspeed Hellbound".)

While Zakk Wylde was no slouch with his own guitar virtuosity, the highlight of which was a near-10 minute solo, and musically and performance-wise the band kicked ass , what impressed me the most was his connection with the audience. Although it sounds almost cliche, not since I saw Dimebag Darrell and Damageplan have I seen a band so in tune with their fans. Between songs, Wylde talked about the fans being members of the Orlando Chapter of the Black Label Society and mentioned that his band members also came from different “chapters”. There was a communal bond that was undeniable.

Personally, although one could say that because I was there, I was by default a “member” of the Orlando chapter, from a community standpoint I still felt like an outsider, not being 100% familiar with the Zakk Wylde catalog. Almost like being at a new church for the first time – it takes a few times to be comfortable. But in the case of the Black Label Society, I’ll gladly make return trips.

Unlike the Duck Down Records concert of two weeks prior, the Berzerkus Tour show ended at the reasonable time of midnight. And even though I had to drive an hour and half back home, I was still home sooner than I was after seeing the hip-hop show. Of course, that didn’t make the following work day any easier.