There are certain rules I abide by on the day of a concert. These are simple rules, acquired through years of seeing almost every genre of music from blues to hip-hop to death metal.

Rule one: Don’t listen to anything by the band within 24 hours of the show. If you don’t know the songs by the day before, you won’t know them. Concerts aren’t college, there is no cramming. And you don’t want your ear influenced at all by the studio recordings. Enjoy the show for what it is.

Rule two: To quote the Wu-Tang Clan, cash rules everything around me. Merch vendors, bars, and some ticket stands don’t take Visa, Mastercard, or American Express, so “if you don’t have dollars, it don’t make sense”. Hit the ATM before you get to a show. It allows flexibility and convenience.

Rule three: Dress the part. Never wear a t-shirt of a band you are going to see. Wear a similar band, or someone of the same genre. But always dress to fit the scene. Don’t wear a Parliament-Funkadelic shirt to see Slayer.

There are two exceptions to rule three. The first is that you can wear a shirt from a festival featuring the band you are seeing. That’s simple enough as it shows community and that you have seen other bands. The second exception is the seldom used “memorable slogan clause”. If your t-shirt has an overly funny, clever, or all-round bad-ass slogan, you are accepted into the community of the performance.

In my time going to concerts, there have been two memorable slogan t-shirts that stand out among the masses. Both are engrained in my cerebellum not only because of their cleverness, but because of the stories associated with them. The first, a black t-shirt that proclaimed “Fuck You, You Fuckin’ Fuck”, was worn by a man named Manimal who I wrote about nearly three years ago. For those who missed it, Manimal was a bad-ass biker dude who forbid moshing in his general area during a 1999 Metallica concert.

The second most memorable slogan tee that stands out for me is a black shirt with the devil’s face and the words “God’s Busy, May I Help You?”. This shirt brings back memories of a concert adventure I had on my 23rd birthday when my college roommate Zheke Snow and I traveled from Tallahassee to Orlando to see rock bands Isle of Q,  UPO, Full Devil Jacket, and Nickelback (after their first album, and before they jumped the music shark).  It was a night of obnoxious cops, tire problems, good rock ‘n’ roll, and driving around the Disney World Complex with the bassist of UPO as he yelled at his drunk bandmates who left him and didn’t tell him where the hotel was located.

Even though I have been to dozens, if not hundreds, of concerts since, I hadn’t seen either of those slogan t-shirts. Until a few Tuesday's ago, when the devil’s question made another appearance.

And of course, I had another interesting night.

The flyer stared at me from beside the keyboard at my work desk, a simple reminder that time was moving far too slow. Every minute dragged on with the full power of 60 seconds of might, as I fidgeted like a child who refused to dream of sugarplums and candy canes on Christmas Eve. Finally at 6:30 I flew out of the office like Meatloaf’s bat out of hell, sped down I-75 at 90mph, daring the Florida Highway Patrol to stop me, and cruised into St. Petersburg.

On the docket that night was one of my favorite bands, Maryland-based groove-metal band Clutch. I’d seen Clutch five times prior to last Tuesday, the latest time being with Black Label Society in October. Opening for Clutch was GroundScore from Washington DC and the Florida/Alabama-based Maylene and the Sons of Disaster. I was totally in the dark about Groundscore, but I had heard a few good things about Maylene and the Sons of Disaster, and I was also looking forward to seeing them.

Into St. Pete I drove, finding a spot in a parking lot a few blocks from the club. Needing money for a ticket, beer, and a new t-shirt, I walked over to a local ATM and pulled out some cash. On my way to the club from the ATM, I found two 2011 pennies with the new backing. One was heads up and the other was tails up. Although I usually think money is money and finding two cents gets me that much closer to retirement, I was struck momentarily by the symmetry of the yin and the yang.

After I bought my ticket, I walked into St. Pete’s State Theater, ready to finally get my rock on. One of the best things about a Clutch show it that it is usually attended by veteran rock fans. Fans who proudly sport their shirts of quality metal bands, such as Slayer, Danzig, or Judas Priest. Shortly after entering, I received a compliment on my shirt, the tour shirt from the aforementioned BLS/Clutch gig from a few months back.

Even though my shirt was highly regarded, I quickly hit the merch stand for a new Clutch shirt. To my amusement, the merch vendor was wearing another shirt I hold near and dear to my heart: an “Arm The Homeless” tee from a punk band called Tree who toured with Clutch in 2003. That was one of the few times I didn’t buy a shirt from my favorite band and opted for the opening act. I couldn’t resist walking around with a picture of an AK-wielding old lady on my back. 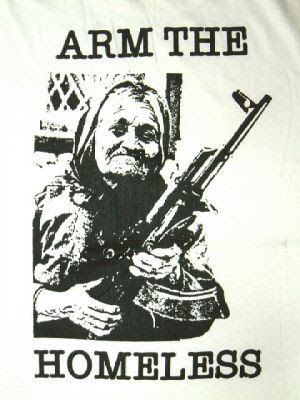 Now dressed to impress with a brew in hand, I walked into the theater and closer to the stage to check out Groundscore. They weren’t bad, a mix of 311 and Sublime, with elements of punk and metal blended in. They were definitely Warped Tour material or the soundtrack to a new skateboarding video game.

(Speaking of interesting t-shirts, the drummer for Groundscore had A Tribe Called Quest shirt on. I wonder how many metal fans caught that?)

During the Groundscore show, I perused the crowd, checking out the environment and doing a little people watching. No matter the type of music show, people watching at a concert is always fun, especially if the band isn’t entirely up my alley.

But that’s when I saw it: “God’s Busy, May I Help You?".  I’m surprised the guy wearing it didn’t ask me what I was looking at I paused for a moment when my eyes hit his shirt. It was if Satan himself was telling me the night was going to be interesting. A warning from Lucifer for me to heed.

Second on stage was Maylene and the Sons of Disaster. Like I said, I heard good things from a few friends about this relatively new band. But because friends can sometimes have music tastes that don’t always jive with mine, I turned to my brother for his valued musical scouting report. That morning, his review came in: “Heavy southern rock/blues sounding”. Nice. My kind of music. I was excited.

Maylene didn’t disappoint. Although I couldn’t understand their lyrics on occasion, I was impressed with their sound. Throughout their set, I pulled out my phone and tweeted comparisons to Corrosion of Conformity, White Zombie, and Black Stone Cherry, all bands I hold in high regard. I closed my tweeted review with the simple phrase, “I like”. I’m going to have to buy some Maylene and the Sons of Disaster.

After the usual downtime between bands, the mighty Clutch came on stage. As to be expected (for me, at least) Clutch was absolutely spectacular. They played many of their most popular songs, from Big News I & II, The Regulator, Electric Worry, and the trace-like Spacegrass. As compared to the last time I saw them in October, Clutch didn’t have to worry about set limits, so they threw in a few jams between songs.

(Here is a youtube video of Clutch playing Escape From the Prison Planet and here is the concert review from the Tampa Bay Times.)

Being a long time fan, seeing Clutch brings out a sense of community for me. Other Clutch fans and I compare times and places we’ve seen Clutch, admire each others’ concert shirts, and no matter what song, we sing along, even if Neil Fallon’s lyrics are sometimes far too complex to understand (Songs about anthrax, redcoats, and elephants?).

Following an extensive set, Clutch ended their show with a mellow encore. And with that, the show was over. But little did I know the rest of my night was just beginning.

Across the street from St. Pete’s State Theater is a row of hole-in-the-wall bars and pubs. As I discovered after a recent House of Pain show, one bar, Fubar, usually has a band on the stage late and capitalizes on the crowd from State Theater to relax and buy some cheap beer.  After House of Pain, Fubar featured a local death metal band, so I was curious to see what they had on stage after Clutch.

On stage at Fubar was a DJ playing dubstep. I’m not normally an electronic music fan, but last year the Wu-Tang Clan put out an album with dubstep DJs and I was curious, so I grabbed a beer, unwound for a bit, and enjoyed a few tunes.

After my beer was finished, I made my way out Fubar. Shortly thereafter, I noticed something was missing.

My truck wasn’t where I parked it.

To my surprise, I parked in a lot guarded by a local towing agency. In a panic, I called the number on the sign and inquired as to whether they had my precious pick-up. After they confirmed it was in their possession, I frantically called my friend Keri, who I briefly saw at the show. Fortunately, even although she was well on her way back home, she turned around to bring me to the wrecker lot so I could get my truck. Thank goodness for friends, or I would have been sleeping with the homeless on the streets of St. Pete.

Did I mention I hate late-night towing companies? I think they are spawns of Satan, brought to Earth only to make life difficult for people. No one is going to use the bank at midnight, so why can’t I park there to go to the bar? I promise I’ll move my truck before the bank opens in the morning.

Anyway, 121 dollars later, my truck was back in my possession and my night was finally over. I should have heeded the t-shirt symbology and been more careful in the presence of the smiling devil t-shirt.