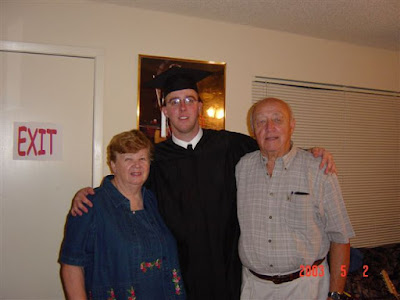 There are some things that by their very nature are incredibly difficult to write. While most writing derives from the brain, sometimes a writer must write from the heart, a practice that requires laying bare emotion and making words not only convey meaning, but also feeling. There are times when a writer must write for affect, not effect.

Although I’ve never considered writing for affect one of my strong points, this is one of those times.

I never did thank her for that.

I grew up only about 15 minutes from my grandparents. I have many great memories of going to their house to eat. And eat. And eat. And eat. Being tall and skinny, my grandmother used to always tell me I had a “hollow leg” as the food surely wasn’t going to my stomach. What can I say? I was a growing boy.

While dinner during these visits was being prepared, I would often watch TV. My favorite thing to watch was Grandma’s recorded-from-HBO VHS version of Star Wars. Once my parents, grandparents, or anyone else old enough to work the VCR put in the tape and pushed the play button, I was transfixed. To this day, I firmly believe that one of the reasons I can recite all the lines to the movie is because I watched it every time we visited my grandparents’.

My grandparents moved to Florida in the mid-80s and my family followed a few years later. I didn’t know much about Florida, but I knew their house was in Inverness and Inverness had turtles. One of which my grandfather marked with a can of spray paint. Then there was the time I flipped over the front end of a bicycle and had both a concussion and a seizure. I don’t remember much of that for obvious reasons.

When my brother Eric needed to undergo cancer treatment at Shands Hospital in Gainesville, Florida, he and my mother would be gone for days if not weeks at a time. While my Dad still had to work and my brother Bryan and I still had to go to school, both of my grandmothers stayed at our house at different times to fill the role of “mom”. As my father’s mother lived in NY, she didn’t know the normal rhythm of the house. During her visits I did what I could to avoid my household chores. But when my mother’s mother was there, these antics failed miserably, as I was forced to comb my hair, wear a jacket to school, take out the trash, do the dishes, and all my other normal duties. And when I tried the “mom doesn’t make me do that” line, my grandmother knew I was lying. She knew the standard my mother kept and there was no fooling her.

A few years later, I joined the Army and left home for the first time. After a few months of training, I was stationed in the middle of Texas, at Fort Hood. Although I kept in touch with family over the phone, I rarely saw anyone until I came back to Florida on my annual Christmas leave.

Except for my grandparents.

Every year, along their trek to Las Vegas, they would make a detour to Fort Hood to see me. Sometimes we went out for lunch or dinner, and other times we would see the sights of Fort Hood. I remember the first year they visited.  One of my commanding officers was kind enough to drive me to a landmark to meet them. Along the way, he asked if they were going to Vegas to get hitched. I laughed and told him how long they had been married (just short of 50 years at that point). He was quite impressed with both their longevity and their sense of adventure.

After my stint in the military, I came back to Florida for college. Although being back in the state meant family was only a drive away, Florida State University was a long five hours from my parents’ house. But it was only two and half hours from my grandparents’, whose house was conveniently located along the way of my drive.

Almost every time I went to my parents’ house, be it for a holiday or just a long weekend, I also visited my grandparents. Sometimes it was for a quick hello, and other times it extended into an overnight stay. More often than not, however, it was for dinner. And despite Grandpa’s insistence that the kitchen would be closed when I got there, or that there would only be bread and water available, my grandmother always had something cooked up for me to eat.

And my grandmother waited up no matter how late I was. With my habit for never being punctual, it got to the point where if I said I would be there for dinner, I think my grandmother would say they were eating an hour earlier than they actually were. This way when I walked in an hour late, I arrived right as dinner was being served.

I remember one time my friend Jamal and I didn’t get to my grandparents’ house for dinner until nearly 10pm as we – wait, no, just I – decided to take the slower backroads down the west coast of Florida instead of taking the much quicker interstate. While Grandpa was retired to his room for the night, it was my grandmother who stayed up, re-heated our dinner, and sat at the table talking with us while we ate.

Jamal wasn’t the only friend my grandmother made feel at home. She also provided beds for my college roommate and me so we had a place to sleep after seeing a rock concert that played an hour away from Inverness. Because she let us stay there, we only had to drive an hour to get some rest after a night of rock’n’roll festivities instead of driving nearly four hours back to Tallahassee in the dark wee hours of night.

Seeing my grandparents as often as I could has always been important to me. While they were always both very interested in my education and then my pursuit of a career, my grandmother would also ask me questions about my investments and whether or not I was saving my money. I would not be as smart with my money as I am now if not for my grandmother.

When I moved to Tampa in 2006, visits to my grandparents decreased in frequency but increased in time. They were no longer along the route to my parents’ house, but they were only an hour and a half away. That meant I could talk and hang out with them for as long as they would have me, or as long as Grandpa kept the kitchen open.

In 1991, my father was in Saudi Arabia working with the US government doing a job similar to what I am doing now in Afghanistan. A short time after he left, my brother Eric succumbed to his long battle with cancer. I’ve thought about my Dad’s situation a lot since hearing the news of my grandmother. I can’t imagine how tough it was for my Dad to lose a son while thousands of miles from home. For me, losing a grandmother is difficult enough.

I just came across this, and was deeply touched and saddened. I knew your grandmother, as the mother of your Uncle John, who was among my earliest friends back in the 1950's. I keenly feel your loss. Pass along my best to Grandpa Joe and to John, if possible.