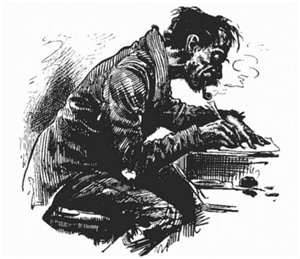 I have been working on my first book over the past year. My goal is to have this book published. Not self-published, but actually published by a publisher. I've self-published before and I might do so again, but I want to test the waters in the publishing industry. I want to put the name of a publisher on my resume.

With that in mind, I've decided to make every Friday "Book Update Day". Every Friday I will give an update as to where I am in the writing/editing/publishing process - at least as far as I can say.

Still re-writing the first chapter, combining much of what was an introduction into the first chapter, starting with a scene instead of long exposition of the whos, whats, wheres, whens. I was left with several paragraphs of background on the character that I still need to merge into other parts of the book.

Interesting links of the week:

Here are a few links that have inspired me this week:

Chekov's Legacy - completely hits the point of what I am doing to my own manuscript.


Anton Chekhov gave some advice about revising a story: first, he said, throw out the first three pages. As a young writer I figured that if anybody knew about short stories, it was Chekhov, so I tried taking his advice. I really hoped he was wrong, but of course he was right. It depends on the length of the story, naturally; if it's very short, you can only throw out the first three praragraphs. But there are few first drafts to which Chekhov's Razor doesn't apply. Starting a story, we all tend to circle around, explain a lot of stuff, set things up that don't need to be set up. Then we find our way and get going, and the story begins ... very often just about on page 3. — Ursula LeGuin


People often ask me what the secret is to writing. It's like they think there's this little one bit of hidden knowledge that, if you learn it, you'll become a rich and famous author, beloved by millions who read your books (or at least see the movies based on them). Guess what? There is. Gather round, lads and lasses, and I'll tell you:

The secret to writing is rewriting.