A dinosaur in corpse paint 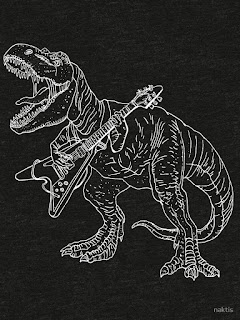 If I was a dinosaur, I would be all about black metal.
A giant meteor is coming and we are all going to die.
Shut up, dude. No, it's not.
Hundreds of millions of years later, you are correct.
Boom.
Imagine you were born right after the meteor hit.
You don't even get to live in the time when being a dinosaur was cool.
The peak of dinosaur death metal.

Are there any dinosaur themed metal bands?
Metal bands love the apocalypse.
Dinosaurs lived through an apocalypse.
One day they might find this blog post buried in amber.
Resurrect it with shards of its HTML DNA.
Rebuild it like the 6 Million Dollar Man.
We have the technology.
We need the page views.

And with that, it's time to retire for the eve.
2 scoops of mental musings and a tablespoon of insomnia.
But still no dinosaurs in corpse paint.
Posted by Jordi at 11:15 PM