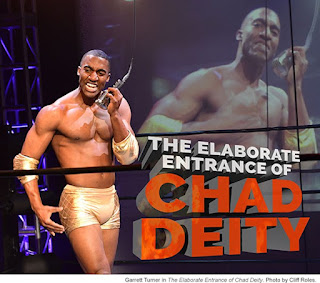 Last month, Stageworks Theater in Tampa performed the wrestling themed play "The Elaborate Entrance of Chad Deity". Written by Kristoffer Diaz and locally directed by Karla Hartley, the play told the story of Macedonio Guerra, aka "The Mace", a technically sound wrestler who "does all the heavy lifting" for THE Wrestling.

Disclaimer: I had an indirect role in Stageworks Tampa's production of The Elaborate Entrance of Chad Deity. I introduced the cast to local wrestlers who helped them with the nuances of pro wrestling psychology and they facilitated the acquisition of the ring the play was performed in.

Although other local writers saw "Chad Deity" as theater critics (see here and here), I went as a wrestling fan - even wearing my afro wig, as I do to wrestling matches. No matter how much I've watched and talked with wrestlers, I am and will always be just a fan. But that fandom has made me more knowledgeable about wrestling than I am about theater. As a matter of fact, there are many, many, things I am more knowledgeable about than theater. So what follows is, as the title states, a wrestling fan's review.

The Elaborate Entrance of Chad Deity takes place in a world that is part-present day WWE and part past-stereotype WWF. While theater fans may not know the difference, for wrestling fans, it means Chad Deity is entirely fiction and the storyline is unrealistic, even for wrestling, which hurts the play's overall message.

But I must digress for now, lest I blow the finish.

While theater fans might feel more comfortable with the social message Diaz was attempting to convey in "Chad Deity", wrestling fans are surely more familiar with the wrestling side of the play, particularly the interaction with the cast. By it's nature, wrestling is highly interactive athletic theater, where athlete action draws crowd reaction which then may drive more athlete action. One of the marks of a good wrestling match is how "in to it" the crowd is.

In "Chad Deity", the theater crowd becomes part of the show. They are told to suspend belief at certain points and cheer and boo as if they are at a wrestling show when the play's action is the wrestling matches. When the cast breaks kayfabe and speaks out of their wrestling character and in the voice of their play character, the audience breaks kayfabe as well - laughing, gasping, or clapping for the words or actions of Macedonio Guerra, and not "The Mace". They act as a typical audience to a performance would.

That dynamic makes The Elaborate Entrance of Chad Diety very unique. However, it brings to mind situations where wrestling crowds assume another level of fan consciousness. Wrestling crowds can either cheer along with the storyline - cheer the good guy or boo the bad guy - or they cheer the performance the wrestlers are putting on. Personally, I am not a fan of "this is awesome" or "this is wrestling" chants, but many fans feel the need to opine about the overall performance of the match, not the characters or situations in the ring.

While the audience watching The Elaborate Entrance of Chad Deity plays two roles: wrestling show crowd and play audience, some of the cast members are playing three or more roles. The actors portraying Macedonio Guerra and Vigneshwar Paduar play these characters and then assume the in-ring personas of "The Mace" and "Che Chavez Castro" for Guerra and "VP" and "The Fundamentalist" for Paduar. Their awareness of their wrestling character while in performance character gives the play a very "Tropic Thunder" feel. The performers are a dude playing a dude (Guerra) playing another dude (The Mace) then becoming another dude (Castro).

Thank goodness the play is written well enough to make sense of that.

That brings me back to the end of the play. The Elaborate Entrance of Chad Deity concludes on a very inconclusive note, at least for a wrestling fan. In the final scene, we are told Macedonio Guerra dumped his heart out to an unseen wrestling crowd through a personal in-ring/in-event promo. After he finishes, crowd favorite Chad Deity enters the ring and powerbombs Guerra. The impression the theater audience gets is that Macedonio was put back in his place and Chad Deity - wrestling hero - would continue to be cheered.

But that doesn't make sense to a wrestling fan. Modern day wrestling fans would react as VP's neophyte girlfriend does: they would assume Deity is now playing the "corporate" heel role, holding down the hopes and dreams of a plucky, talented, aspiring, and honest wrestler. Modern wrestling fans admire honesty and hard work in their good guys. Bad guys cheat, lie, and do what they need to keep power.

In order to succeed in the "Chad Deity" world, The Mace would need to assume the Daniel Bryan role, someone management believes is unfit for the title, but the fans root for. I would be curious what Kristoffer Diaz believes happens in the next wrestling event. While theater fans leave the performance thinking Macedonio Guerra did not create his own story, wrestling fans know wrestling is perpetual, every moment can be incorporated into a storyline, and good eventually defeats evil, no matter what race, creed, or gender the good people are.

Modern fans want fairness to boil to the top of wrestling's scripted reality.

For a wrestling fan, Macedonio Guerra did create  his own story through the sacrifice of VP: The Mace became a face, and he will eventually have his own elaborate entrance. "The Fundamentalist" as a character becomes a prop not for THE Wrestling to reaffirm Chad Deity's All-American greatness, but for The Mace to break the fourth wall a la CM Punk in his famous promo rejecting WWE and Vince McMahon.

The Elaborate Entrance of Chad Deity isn't a perfect wrestling story. It is not The Wrestler. Chad Deity relies too much on past stereotypes of what wrestling was juxtaposed into the modern appearance of pro wrestling's corporate side while not understanding the social norms of modern professional wrestling. Much of this can be attributed to the fact that The Elaborate Entrance of Chad Deity was first performed in 2010, and so much of wrestling's progressiveness has occurred in the last five years.

But the performance of The Elaborate Entrance of Chad Deity, when considered in its own alternate reality of wrestling's already alternate reality, is a fun experience. I would highly recommend checking it out if it is performed in your city.
Posted by Jordi at 1:09 PM