A Journey to Hatchet City Part 6: Tunnel of Love 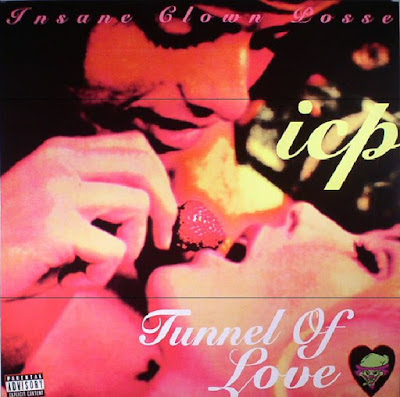 Picking up on my journey through the long and illustrious catalog of Psychopathic Records, today's listen is "Tunnel of Love", released in 1996. This is a non-joker card release following Riddle Box.

Based on the cover art, this album looks like it is going to be interesting - like ICP's version of a romance album. If I understand the Violent J and Shaggy 2 Dope a little bit already, this isn't going to be Luther Vandross. There will probably be a lot of murder, mayhem, and misogyny. Romance, the ICP Way.

Intro starts with a deep tone and a whispering creepy voice welcoming us to the Dark Carnival. A woman whispers "do you love me?". This is creepy. I'm scared.

Funky beat. Shaggy 2 Dope opens the song with typical A-B-A-B rhyme style. Cotton candy isn't about candy. Imagine that. I like this beat and the chanting chorus. Violent J drops the second verse. I am not surprised this album starts with sex rhymes. There is no Dark Carnival-Carnival of Carnage in this song. I wonder if there will be at all in this album. Is this the clowns day off? The Ringmaster gave them a few days off and they decided to chase women instead of kill rednecks. The clowns lead interesting lives.

Another funky beat. Slower and more bassy than the last song. Super Balls is a superhero. I wonder if Super Balls knows Redman's Soopaman Luva. Super Balls is the first time I have heard "whoop-whoop", which I am pretty sure is an ICP staple. I dig this song, as misogynist as it is. It is funny. There are verses on this song that do not seem rapped by Violent J and Shaggy 2 Dope (ed: according to Wikipedia, this song features Legz Diamond - which seems like a rip-off of Wu-Tang Clan Raekwon The Chef's nickname of Lex Diamond).

This song starts with skit of a murder in which the victim doesn't die. Then it goes into movie narration describing what a ninja is. (Seriously, first Legz Diamond, then a straight Wu-Tang style song intro. Wow.)

Then the song drifts into a fantasy verse by Violent J and his obsession with ninjas. Which is similar to "It Feels Good to be a Gangsta". The ninja is of course a hero. The ninja beats bullies, defends his mom, and then takes revenge on his jerk boss. No love in this song, just ninja fantasy. Like an 1980s kid after American Ninja or and other Ninja movie. I dig this. Super cool.

This song is the Official Ninja Webpage to music. Which is awesome and should always be promoted.

Driving beat. Shaggy 2 Dope opens this song with a murder verse. I guess the clowns are back. Although he mentions acting like a "gang banger should". Huh? This song features a fun call and response between "stomp" and "whoop whoop". I bet this is great concert song.

The song ends with a carnival beat and mention that the jugglers and clowns are coming to your town. I guess the clowns aren't gone.

Creepy intro. Violent J opens this song with a story about his upcoming prom. Unfortunately, he gets rejected by his proposed prom date. Then, in typical ICP fashion, he has to kill the girl who rejected him and brings her body to his house for his own personal prom. Sadly, I can see this song being listened to by kids who aren't very popular and maybe face rejection in high school. It is not very optimistic. I get it, but I worry the wrong kid could like this song. It seems more realistic than ICP's other social revenge songs. Creepy. Sorta like Possum Kingdom by the Toadies.

Violent J opens this song taking his "kinda bitch" - who of course is a freaky carnival woman. This beat is really weird but interesting. There sounds like there is a duck quack in the background. Of course, Violent J's chick is anti-social, disturbed, and promiscuous. This is the ICP version of Apache's Gangsta Bitch.

When I Get Out:

Starts with a skit about a prisoner getting punked by guards. Shaggy 2 Dope opens with a verse about getting out of jail. I am guessing this song has nothing to do with the carnival of carnage. I am not sure where being in prison falls in the ICP story. Is this just a fantasy? Why would ICP fantasize about getting out of prison? Do they have people in prison? They never mentioned before that prison was a part of their lives. I am not sure about this song. It sounds like they are trying to build "gangsta street cred" with this, glorifying getting out of jail. Sounds like a song suburban white kids would write to be cool. Worst song on the album.

Track 8 has a hidden track at the end. After minute of silence, there is a gameshow called "You're a stupid ass" that narrates a quiz that when correct, gives a number to call to hear the title of ICP's new album. Neat way to build excitement and keep fans engaged.


Overall, this was a fun album. I wasn't expecting a lot, although I was expecting ICP's take on romance. I wasn't disappointed. A lot of the beats were tight and the rhymes were creative. The high point was Ninja and Super Balls. The low point was definitely When I Get Out. Another point about this album was that it avoided a lot of the socio-economic revenge ideas that have confused me about the clowns. But I think the joker card series is what kept the fans coming back. But to me, there non-joker cards albums have been more creative and fun thus far. Maybe I just don't get it yet.
Posted by Jordi at 12:31 AM