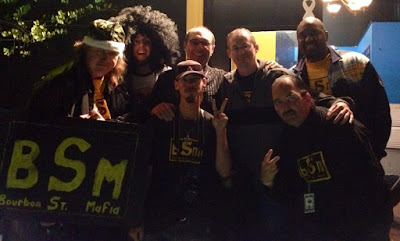 These posts never get easier. But even if someone passes through my life on few occasions, I still like to write about those memorable moments. I feel it is a great way to pay tribute.

Way back when I first moved to Tampa, I attended Florida Championship Wrestling. FCW was the training ground of WWE and, as I have written often, it was a family-like atmosphere with a great fanbase. It was where I started rocking my now famous afro wig and joined the famous (maybe infamous?) Afro-Squad.

It was also where I met Norman Wright. Norm was a local wrestling fan with eyes on joining the wrestling business. Norm was a good dude, a nice guy, who always said hello and was a pleasure to be around.

If I am not mistaken, Norm trained with FCW for a bit as well, learning the ins and outs of wrestling. After finishing with the WWE's affiliated school, he then set a sail into the Florida independent wrestling scene, where breaking in is tough and networking is tougher.

But Norm made it, and in 2011, he wrestled several matches in All-Star Wrestling under the name "Roman Wright". I was a regular at ASW shows and saw Roman in the ring quite often. Roman was a tough guy who battled well in the ring, although he drew the ire of fans with his attitude and demeanor. Roman was opposite of Norm, who was a friend to anyone in the crowd.

While that was the extent of my time seeing Norm wrestle, it was a few other times I saw him around town that I will always remember. In 2019, I saw him at the now-closed Franklin Manor nightclub in downtown Tampa. He was hanging out with a few ladies and enjoying himself. We caught up and he told me he was working at another nightclub. It had been years since we talked, but we caught up like old friends.

But my greatest memory of Norm was in October 2008. October 19th, 2008 to be exact. The day the Boston Red Sox and Tampa Bay Rays played Game 7 of the American League Championship Series. Being new to South Tampa, I was looking for a place to watch the game. I discovered the Press Box, one of Tampa's oldest sports bars. It was packed for the big game and there was not a table to be found. Fortunately, I spotted Norm sitting at the bar with a friend. Although I had only met him a few months earlier at the FCW shows, he waved me over to join them. The whole night was electric was the Rays won and made their first World Series in franchise history. I will forever be appreciative of Norm for finding me a spot in the crowded sports bar and letting me hang with him and his friend.

Farewell, Norm. You were a good dude gone too soon.