Book Review: Too Sweet — Inside the Indie Wrestling Revolution 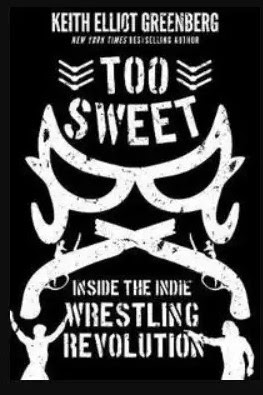 Back in 2010, I ran social media for a small, local independent wrestling organization in Tampa, Florida. All-Star Wrestling of Florida was as small and as local as wrestling comes — a bar show featuring mostly talent from the Central Florida. Attendance was lucky to reach 100 paying patrons.

After ASW Florida folded in 2011, I stopped being as interested in the indy scene. I still attended show at wXw, Afa the Wild Samoan’s developmental, watching future WWE talent such as Sean Maluta, Kona Reeves, and the widely-traveled Mercedes Martinez. But I attended because the Anoa’i Family has become family to me and my family. Only going to wXw meant the underground wrestling scene was no longer my scene.

I also stopped writing about wrestling as much. For a while I was a guest writer on the now-defunct Walls of Jericholic — The Wrestling Blog website. Although we often had different opinions, their editor allowed me to write my views through the prism of the Florida indy scene.

So it was with great interest that I read Keith Elliot Greenberg’s “Too Sweet: Inside the Indie Wrestling Revolution”. Too Sweet covers independent wrestling from its beginning as “renegade promotions” in the territory days to a viable source of entertainment in the WWE-dominant days to the gathering of the top stars to create a WWE-level alternative in All Elite Wrestling (AEW).

Although Greenberg writes about the big Japanese wrestling leagues, and mentions pro wrestling in the UK and Mexico, he focuses most of the story on Ring of Honor, CHIKARA PRO, CZW, GCW, and other US-based independent organizations. Of course, hundreds, if not thousands, of other independent feds went unmentioned, but to write about them all would require volumes. Credit Greenberg for keeping a narrative, even if none of my local indies were mentioned.

Also to his credit, by keeping to these top independents, Greenberg stays away from the criticisms of independent wrestling — that is has led to a watered down product because everyone with a ring is putting on shows. As a matter of fact, Greenberg almost embraces the low bar of wrestling promotion. Veterans of yesteryear state the high bar kept the wrestling community tight and ensured the fanbase received a quality product for their money. The lowered bar means an open market, where fans dictate the type of entertainment they want to see. Greenberg seems to favor the latter, not the former.

While I enjoyed the tale of the indies, the narrative almost works against Greenberg. As the book progresses, the book becomes The Road to AEW, with the Young Bucks, Cody Rhodes, Kenny Omega, and other stars of the present organization becoming the focus of the book. The focus on the indie organizations is left behind. How they are doing in 2020 would have made a great epilogue. Perhaps that is covered in his book Follow the Buzzards: Pro Wrestling in the Age of COVID-19. I might have to pick that up as well.

(Quick aside: While WWE was hunkered down in Tropicana Field during the pandemic, I ran into WWE stars Jey Uso and Otis at several Tampa-area sports bars. Joined them a few times for dinner and drinks. Family is family.)

Despite my critique of Too Sweet’s final focus, the rise of AEW as a major wrestling promotion was and still is a big deal. AEW is an organization primarily run by wrestlers with the focus of taking on WWE. Unlike TNA/Impact, AEW was backed by a billionaire family and immediately landed a major TV deal. Initial investment combined with the wrestling buzz generated by market-savvy wrestlers made AEW’s launch “must-see TV”. That is definitely a story worth telling.

So what is next for the indies? Small wrestling organizations filled with weekend warriors doing their thing in flea markets, gyms, and VFW halls won’t get the same attention as AEW. But given the highly volatile business of pro wrestling, some small indies might last longer.