Snowman of the AfroSquad Writes about Wrestling 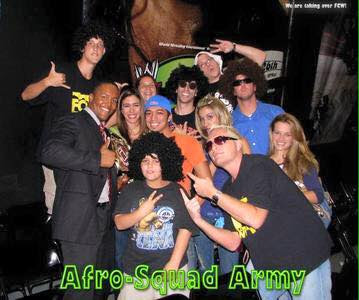 Once again he is back with his 'fro intact.

Florida wrestling fans, this blog is for you!

I had another great Thursday night at Florida Championship Wrestling.

Last Saturday I ordered a couple afros for some of my homies, and they arrived via UPS just as I was leaving my driveway on my way to the show. This marks the second emergency shipment of afros that UPS has delivered "just in the nick of time."

When I got to the show, I traded a few afros with the Bourbon Street Mafia for a BSM shirt. Now the BSM and the 'fro Army have officially formed an unholy union. (The only thing that could make us more powerful would be the assistance of a Gargoyle and a Zombie Pimp!)

At the beginning of the show, I tossed Dusty Rhodes an afro. He donned the 'fro, and it was quite possibly the greatest moment in Afro-Squad history! (Does Dusty need a special Afro-Squad name?)

In my eyes, Afa stole the show again for his reckless ass kicking of Stu Bennett. The most entertaining part is that Afa seems to be the most "over" guy in the building, but he is supposed to be a heel. I hope having an entire Army of afro-wearing lunatics chanting "fear the 'fro" doesn't hurt your popularity.

I was also impressed with Natalie Neidhart and Beth Phoenix's style as a tag team. They even finished with the Hart Foundation's "Hart Attack." I wonder if we'll see them working together in the future.

Kafu's wife sat by us. Although she wasn't too excited about having her picture taken, she was a fun addition.

I'm really starting to enjoy Kafu's gimmick as well. He is the "master of the Claw hold," which is a great throwback to the '80s. Jordi Scrubbings saw Kafu in the grocery store last week, so we tried to harass Kafu about his shopping list. (He apparently loves cheese!)

I also have to hand it to Angela Fong for posing for pics with the Afro-Squad Army.

I got to talk to Diana Hart for a few minutes too. She seems like a really sweet lady. As Georgia Smith joked about her mom, "she talks just like Bret." (Their accent is almost identical.)

Once again, FCW Andy (AKA Original Jit) and his Dad epitomized what wrestling fans should be. Those guys breathe wrestling.

Finally, will somebody tell Jack Gabriel to put some pants on? Hey, Eric Perez ... if you post a blog comment ... I'd reply "Oh Yeah!"

Stay tuned next week for even more Snowman ...