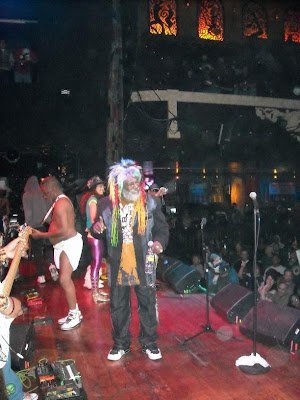 Few musicians have a greater impact on today's music than George Clinton. The number of George Clinton beats and songs used by hip-hop artists is beyond count. He is probably the most sampled performer outside of James Brown. And with the passing of the Godfather of Soul back in 2006, George Clinton has inherited the title of Funky Patriarch. Although it's been nearly 30 years since Clinton smoked the Billboard charts with hits like "Atomic Dog" and "Flash Light", he still manages to makes his presence known with cameos on TV shows (CMT's Gone Country 3) and albums (Wu-Tang Clan's 8 Diagrams, for example).

Needless to say, whenever I get the chance to see such a maestro at work and be in the presence of musical greatness I don't hesitate. Also, considering I recently bemoaned the commercialization of the funk, I needed my confidence in The Funk lifted by the man who made it famous.

It's late, so I am giving you guys the rapid bullet style:

- This was the second time I've seen George Clinton in concert. Back in 2001, I saw Clinton and the P-Funk All-Stars perform in a club in Tallahassee. That was one of the best shows I have ever seen, so this show, nearly eight years later, had a lot to measure up to.

- George Clinton has one of the biggest, most awesome backing bands I have ever seen. I am not sure whether they were Parliament, Funkdelic, the P-Funk All-Stars, or just a motley assortment of talent. But they were awesome. And a majority of them were only used for a small selection of songs. It was difficult to keep track, but I think there were three rotating drummers; six different guitar players; eight back-up singers; two organists; one rapper; two hype-men; one trumpet player, trombone player, sax player, and bassist. That's 27 people if you include George Clinton.

- Best musicians: the two lead guitar players and the saxophonist. Awesome mind-melting solos. Perhaps the best was the guitar solo on "Maggot Brain".

- Clinton and crew played most of the classics: "Give Up The Funk", "Make My Funk The P-Funk", "Up for the Down Stroke", etc. No "Atomic Dog" or "Flash Light" though. And I was really surprised there was no "Chocolate City" or "Paint The White House Black". Most interesting suprise: a cover of Lil John and the Ying Yang Twins' "Get Low" (From the window to the wall ...).

- Another pleasant discovery was back-up singer Kim Manning. Wow. I don't what I was more impressed by: her voice, her appearance, or the fact that she rolled across the wire-covered stage on roller skates and never once tripped.

- Manning wasn't the most impressive back-up singer however, that title belonged to the woman George Clinton brought out for the last song. Absolutely amazing singing voice. Probably the best I have heard live since seeing Shemekia Copeland.

- This concert had possibly the most diverse crowd I have ever seen at any concert. There were black folks, white folks, young folks, old folks, preppy folks, and numerous hippie folks. Everybody was represented. And although a few people drank too much (crazy hippies!), I didn't see security get involved other than to tell a girl or two to get down off of a guy's shoulders. I'm not sure if the positive vibe was due to the music or the copious amount of weed being smoked by the crowd. Whatever works, I guess.

Overall, this show wasn't quite as good as the '01 show in Tallahassee. That show was an "A". Tonight's show only gets a "B+". For only $26, however, it was absolutely worth the money.

For those curious, my belief in The Funk has been restored. Though I am still violently opposed to any commercial that uses The Funk - especially when it involves goofy kids or credit cards pitched by Morgan Freeman.

(Note: That picture was not taken tonight. It is from George Clinton's myspace page. I forgot to bring my camera.)
Posted by Jordi at 9:52 PM