Measuring the true worth of a pro wrestler 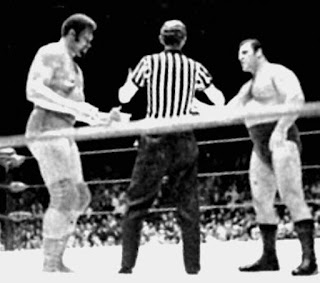 By now it should come to no surprise that I am a bit of a pro wrestling fan. I'm not sure how it happened, but it did. I go to shows, hang out with other wrestling fans, and even have gotten to know some of the performers and a little about the business. I am by no means saying I am the second coming of Vince McMahon (who I have a growing respect for by the way), I am just saying I think I might know a bit more than the average fan who occasionally watches Monday Night Raw.

With this new found (or newly acknowledged) fandom in mind, I've started to put my deeply analytical and often out-of-the-box mind at work thinking about pro wrestling. Sort of in the same way sabermetric folks think about baseball or a growing number of people are thinking about basketball. Since I've always been amazed by the way the "stathead" fanbase flips and bounces the numbers, I wondered if someone could take the same magnifying glass to pro wrestling. That is, to dig into pro wrestling and see if there are any patterns, trends, or coincidences worth noting.

Ah, I can hear it now, "Baseball is real. Wrestling is fake. You can't compare them or think about them the same way. That's not only ridiculous, it is a waste of time. Why am I reading this?"

Well, if you are still with me, thank you. Because I am about to do the impossible, at least I think it is, I am going to introduce statistical analysis to the untamed wilderness of professional wrestling.

Here is a little college entrance exam analogy for you:

Wins is to Baseball like _____ is to Pro Wrestling

I am going to go with "Money". The quest for money is the lifeblood of pro wrestling like the quest for wins is to other sports. Not that money isn't in some way related to baseball and basketball, but financial gain is only a positive byproduct of the team's daily results. In pro wrestling however, the results of the contest not matter. It is an athletic show, similar to Circus De Soleil. But Circus De Soleil is not promoted like a sport like pro wrestling is. Therefore, I am combining the results of Circus De Soleil with the analysis of sports - accurately maintaining the standard of "sports entertainment".

Ok, now that I have (somewhat) established that money is the goal of a pro wrestling event, then what is it about pro wrestling that brings in money? My answer to that is "entertainment". Any pro wrestling promotion can make money the first time, but to be successful an organization has to entertain. That is, it has to provide a level of excitement to the fan base over that of competing venues of similar costs. That's cost-benefit and simple economics 101.

So where does the burden of entertainment in pro wrestling lay? Who is primarily responsible for ensuring the fans reach a level of entertainment that will best lead to a return visit? The answer to this question, to the chagrin of self-promoting owners, is with the wrestlers. They are the meat and potatoes of pro wrestling. They are as important as touching first base is to scoring in baseball. Without touching first, you cannot score. And without wrestlers, you cannot have a pro wrestling show.

(Note: some promoters and other in-ring personalities do have some entertainment value. But the majority of the burden of entertaining is on the wrestlers.)

If entertainment equals money, how do you measure entertainment? The best way I can figure to measure entertainment is through response. Unlike watching chess, watching pro wrestling should be an activity unto itself. Fans should cheer or boo or clap or root for their favorite. Wrestlers use these reactions to judge whether they are "getting over", i.e. their act is being bought by the crowd. So therefore, the best way to measure if the fans are entertained is the same way we should judge if a wrestler is "over" - by the amount of noise a crowd creates. To date, no promoter, at least that I know of, measures crowd engagement or crowd noise.

Using a generic noise level scale, the average conversation is at 60 decibels (dB). A loud crowd is somewhere between 100 dB and 120 dB (the equivalent to a riding lawn mower). So the average crowd noise should be somewhere just below that, say 90 dB. Of course, there might be a slight difference in the dB level of booing, as most people can't quite boo at the volume they can cheer. With this standard in mind, any wrestler that can't reach 90 dB could be referred to as Jabroni level (JL). Anything above 90 dBs could be called Value Above Jabroni (VAJ).

(Below JL would be the cursed BBL, or bathroom break level. If a wrestler can't crack BBL then they probably need to go back to training because they are not connecting with the crowd.)

So how could a wrestler get a crowd from Jabroni Level to above-Jabroni level? In my opinion, the first thing a wrestler can do to attach him or herself to the fans is have a catchy name. Like police dogs, most wrestlers go with short names, with most being at least two to four syllables (see "Hulk Hogan", "William Regal", etc). Either that or they have a memorable nickname, such as "The Butcher" or "The Dragon". The bottom line is that the name needs a good Chantability Factor (CF). If fans can chant it, they can make it heard.

As the name infers, CF is the ability of a name to be chanted. "Rocky" for example, has a great CF. Two syllables, rhythmic, and begins with hard consonants. You could even add two syllables in the chant and go with a "Let's go, Rocky." See, no more than four. On the other hand, Engelbert Humperdinck has a CF of zero. You can't do anything with a name like that.

Admittedly CF is a bit vague, but my next group of stats is precisely measurable. Again, the key is decibel level.

In wrestling, the antagonist character is called a "heel". The heel attracts the boos, the jeers, and negative feelings. His negative actions are what draw heat, or response. Some heels are better at drawing heat than others. Promoters obviously want the heel able to draw the most heat in the prominent matches. If an average heel musters a 90 dB response (Heat rating, or HR), then a good heel should, on average, draw more heat. Simply put, he or she draws Heat Over Average Heel (HOAH).

During the match, performers try to keep the crowd involved, whether cheering or booing. A good match will have a high Crowd Momentum (CM), meaning the crowd is well into the match and vocalizing their enthusiasm. This is easily measurable by the duration of a certain dB level during the match. The main event should probably have the highest CM of the show.

Wrestlers don't want the CM to be too high, however, or else the fans will have reached their peak prior to the climax of the match. During most matches, the climax occurs during one of the wrestlers' "end move" or "finisher". A finisher should rank high on the Crowd Popping End Move Scale (CPEM Scale), measurable by the difference between the crowd's dB level prior to, during, and after the move. A headlock, for example, would likely have a low CPEM score, as it is doubtful the crowd response would be that different. A chokeslam, on the other hand, has more suspense and drama to it, hence a probable higher CPEM score.

I'll admit, I seriously doubt promoters will start measuring dB levels and other measurements of crowd enjoyment anytime soon. (Although here is a dB meter for only a few hundred bucks.) If pro wrestling is one thing, it's traditional.

Then again, who would have though baseball, the most traditionalist of all sports, would lead the way with statistical analysis? Maybe, once again, I am just ahead of my time.
Posted by Jordi at 7:11 AM