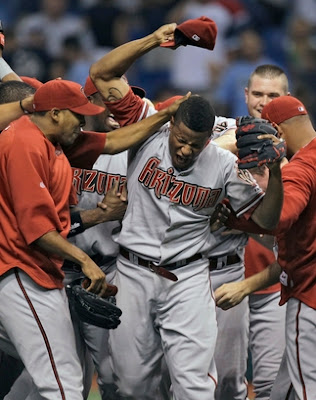 There is an usher named Lou at Tropicana Field who I've become friends with over the last few years. Since I started going to Rays games regularly in late 2007, I've made it a habit to talk baseball with Lou prior to every game, whether I'm sitting in his section or not.

Hailing from the Bronx, Lou is one of the many New Yorkers who have moved to the Tampa Bay area and brought with them their love of baseball. As much of an old-time baseball fan as a fan of the modern game, Lou and I have talked about some of the greatest pitchers to ever play the game, from Bob Feller and Whitey Ford to Roy Halladay and Felix Hernandez. Since he started going to baseball games in 1944, there isn't much Lou hasn't seen in person.

Before Friday night, however, he had never witnessed a no-hitter.

I remember talking with Lou about Edwin Jackson in 2008. Back then, Jackson, the mercurial fireballer with a golden right arm, was the Rays fifth starter. He was also an enigma wrapped in a puzzle tucked in a quagmire and soaked in a dilemma. We all saw he had talent - the ability to throw 100 mph, an arm durable enough to go late into games, and pitches that made major league hitters look foolish. We just didn't know why Jackson couldn't put it all together consistently. Cork Gaines of Rays Index even compared him to "Nuke Laloosh", Tim Robbins' notoriously flaky character in Bull Durham.

On Friday night, Edwin Jackson put it all together.

After the game, the baseball blogosphere and Twitterverse spun like a whirling dervish over the fact that Jackson threw a whopping 149 pitches in no-hitting the Rays. In the era of pitch counts and 100-pitch limits, Jackson's performance deferred from the mean in a drastic way. An article posted after the no-hitter on Baseball-Reference.com stated Jackson threw more pitches than other pitcher in a no-hit game. As the night progressed, analysts, prognosticators, sooth-seers, forecasters, and others all expressed their opinion.

According to baseball analyst Joe Sheehan's twitter feed, "No-hitter aside, there's no way it makes sense to protect a one-run lead in the ninth with a guy approaching 150 pitches."

Fellow analyst Rany Jazayerli countered Sheehan's statement with a tweet of his own, "If Jackson played for 29 of 30 teams, you'd have a point. In ARZ, a tired Jackson might still be better than anyone in the pen." and "In a season where the previous high pitch count was 132, there's no way to justify 149. But it's still pretty cool."

ESPN writer and renowned baseball scribe Rob Neyer wrote that Arizona manager A.J. Hinch "didn't throw caution to the wind. He grabbed caution by the neck, spit in its face, and then he strangled it."

The bottom line however, is that Edwin Jackson made history.

Over at Bus Leagues Baseball, blog e-migo and longtime baseball fan Brian Moynahan has written about a "Baseball Bucket List", a list of game actions and events he would like to see in person. Brian listed things like a triple play, a player hitting for the cycle, and an inside-the-park home run as the things he would like to see.

I don't know if my friend Lou has a Baseball Bucket List. Maybe he does or maybe he came to the realization that no matter how many games he went to he would never everything baseball had to offer. Maybe he was okay with that and vowed not to be disappointed when his baseball watching days ended. Maybe he resigned to the fact that despite seeing dozens of hall of famers, numerous pennant races, and a bunch of World Series games, he would never see a no-hitter.

Then Edwin Jackson got Jason Bartlett to ground out to shortstop Stephen Drew for the final out of the 267th no-hitter in major league history.

After the game, I knew I had to find Lou and get his reaction. After a game like that, I couldn't wait until the next time I visited the Trop to talk baseball with him. When I finally found him, Lou was overjoyed, and mentioned a few of the great arms of yesteryear - the Allie Reynoldses and Bob Lemons - and how he never saw them throw a no-hitter. But after 66 years seeing baseball (by comparison, even the oldest Met fan has only waited 48 years), it was Edwin Jackson who finally gave Lou something he had never seen.

Email ThisBlogThis!Share to TwitterShare to FacebookShare to Pinterest
Labels: Baseball

Great story, and thanks for the link to my post.