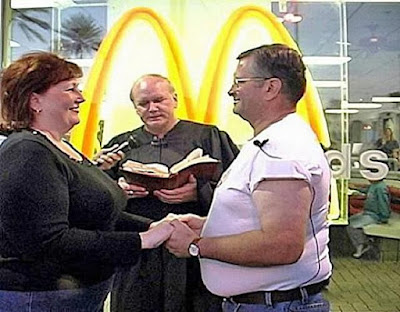 (This was originally published in the FSView and Florida Flambeau in 2002, but since they don't have my old articles online at all, I decided to post it here.)

According to the unwritten rules of society, marriage is an expected step for most people in their 20s. Following tradition, people should be on the lookout for that lifelong soulmate after their college graduation. Once this mutual discovery of partners is complete and two people decide they want to spend the rest of their lives together, marriage planning becomes horribly one-sided.

For example, every trip to the local magazine rack presents women with plenty of advice on the perfect wedding. These publications give tips such as what to wear, and most importantly, what the groom-to-be should be doing. Apparently, guys have no say in what should be one of the biggest days of their lives. This lack of input may either be the cause or the effect of a predominant male indifference towards the matrimony ceremony.

However, like the minute percentage of women who don't consider their wedding an event of epic proportion, there are some guys who have ideas on what they want to happen on their big day. I am of this small minority. Mine are trivial considerations and in no way alter the grand expectations of my bride-to-be.

My first request is during the planning stages of the wedding. Being somewhat unknowledgeable to the wedding gift procedure, I was recently introduced to gift registration. This is a fairly resourceful idea in which well-wishers buy specific gifts from specific stores. It makes the process very neat and orderly. I have noticed, however, that the usual suggested stores are entirely off-track. Most people want their gifts from Tiffany's, Dillard's, JCPenny's, or even Home Depot for those practical minded folks. Not me. I want my gift-bearers to shop at the Dollar Store. Why ask for one cup for 35 dollars when you can get 35 cups for one dollar? Imagine how many more gifts can be expected. As an added bonus, even the poorest relatives will feel like an integral part of the wedding present parade.

Request number two is slightly more involved. I want a midget, a clown, and an Elvis impersonator to not only be present at the ceremony, but also at the reception. (They must be three different people. I will not accept a midget with clown makeup and sideburns.) Their main purpose is to be in all official wedding photos. Attendees can be photographed with all, two, or only one of these esteemed guests. Who wouldn't smile for the camera knowing they are in the presence of comic and rock'n'roll greatness? I can only imagine how perfect a picture of Elvis, a midget, a clown, and my bride and I will look hanging on the wall of my future home.

My third and final request is that no eating utensils be used or supplied during the reception dinner. I have always been a big fan of the barbaric style of eating featured at Medieval Times and I want my friends and family to share in the joys of finger food. Although peas and spaghetti would be eliminated, entrees such as chicken wings, french fries, or even asparagus are still options. Plenty of napkins are a must of course, as it would appear uncultured if I wiped the barbeque sauce from a plate of ribs on my rented sky-blue polyester tux.

I know the hardest part of achieving these aspirations will be finding someone willing to accept my ideas. I would hate to invest months or years into a relationship only to see the girl of my dreams walk out when she fails to compromise on our wedding plans.

I am flexible, however. Skipping the ceremony, traveling to Vegas, and having a drive-thru wedding is okay as well.