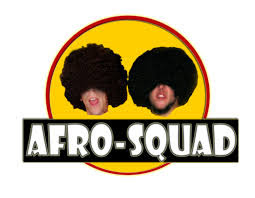 For those who have been following the last few years, every so often I mention the AfroSquad, the funky forebearers of  fro-wearing fun. Legend has it the AfroSquad was two guys, one in Michigan and the other in Texas doing similar videos and posting them in the days before YouTube.

Sometime in the early 2000s, the AfroSquad was forced underground and someone forgot to pay the website bill. The name afrosquad.com expired, the afrosquad.com name was claimed, and the AfroSquad moved to afro-squad.com, where you can still find some funny stuff. However, after a little web perusing I found the name afrosquad.com is for sale. I thought maybe I had a chance to reclaim the name and bring it back to the old school 'cause I'm an old fool who's so cool. And after I got done singing "Whomp, There It Is", I would bring some funkiness back to the domain that started it all. So I sent an email to the company responsible for the negotiation of afrosquad.com. I told them I was interested and asked how much the owner was willing to sell it for. I had a price in mind and was willing to cough up a few hundred dollars, tops. A few days later, I received an email response (abbreviated due to confidentiality):


Hello Michael, I am the Domain Broker who represents afrosquad.com. This domain name has been previously quoted at $28,000.00 USD. If you would like to make an offer we'd be happy to present it on your behalf and see what the owner says. Thanks very much for your interest.

That's right. $28,000 dollars. As much as nice car or a legit down payment on a house. Now I don't know how much website ads make. I don't anyone who clicks ads, although I have heard advertising on the web is a way to make money. But $28,000? That's a lot of cash. I wrote the company back and offered $250. Like I said, I was willing to throw down a little bit. Not a lot, but a little bit. Considering I have never bought a website name for more than $12, I thought $250 was rather reasonable. Especially for a site with nothing on it. Crazy, right? Then I received this response to my counter-offer:


Hi Michael The domain owner appreciates your feedback but respectfully declines your offer. All the best to you and your venture.

Email ThisBlogThis!Share to TwitterShare to FacebookShare to Pinterest
Labels: AfroSquad