Jon Stewart and Leadership on Display in Tampa 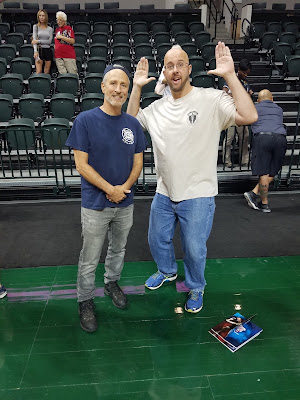 Recently I had the pleasure of meeting comic legend Jon Stewart. He was in town supporting the 2019 Warrior Games, a series of athletic events involving wounded military members from the US and several other countries. He has supported the Warrior Games as spokesperson for several years.

I noticed a few things about Jon Stewart while he was here in Tampa. One, I didn't realize how short he was. I am 6'1 and he was quite shorter than I am. I thought he would be taller.

But more importantly, I realized firsthand how Jon Stewart worked with people. Throughout the ceremonies and at the events, I never once saw one of the most famous comedians in America put himself first. He was an amplifier and cheerleader of the real attractions of the event: the disabled veteran athletes of the US Armed Forces.

At the Opening Ceremonies, Stewart served as an MC, handing the floor to Generals, the teams, and local politicians who spoke about the event. The famous comedian was just there to facilitate.

At the Closing Ceremonies, Stewart even went so far to step to the rear-most part of the stage while the athletes were getting their awards. Although he brought attention to the athletes and to his other efforts with the 9/11 responders, he wanted little credit himself.

Then I realized stepping aside is a common trait for Jon Stewart. On The Daily Show, Stewart served as MC, letting his correspondents report and his guests tell their story. Although he got his jokes in, Stewart was the pilot as he was at the Warrior Games.

Of course, The Daily Show prospered under Stewart's stewardship. But it also spawned several other shows and careers, to include Stephen Colbert, Steve Carrell, Samantha Bee, Ed Helms, and John Oliver. Jon Stewart let those careers grow under his watch.

Other writers have noticed Jon Stewart's positive leadership. In this Inc. article, they listed 5 leadership traits that Stewart displayed at The Daily Show.


Likewise, a recent Forbes article pointed out Stewart's ability to challenge the status quo, inspire collaboration, and inspire purpose. Business Insider called Stewart a "superboss" because of his ability to promote other's careers.

I wonder how many of these leadership traits were learned and how many came naturally to Jon Stewart. Where did he learn the confidence to put others first? Was it learned in improv, where you are only as good as your partner on stage? Did he have a mentor? Was these traits learned as the leader of The Daily Show? Or was it something Jon brought to comedy from an earlier age?

However he learned it, I would buy a book on leadership by Jon Stewart.
Posted by Jordi at 2:59 AM