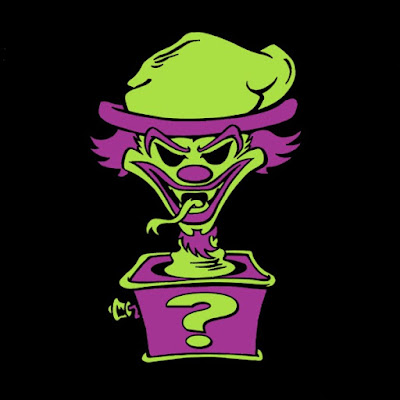 Continuing my valiant review of the Psychopathic Records catalog, today's listen is the Insane Clown Posse's Riddle Box, released in 1995. Riddle Box is the third Joker Card album from ICP, following Carnival of Carnage (1993) and Ringmaster (1994).

Going into this music adventure, I did not realize ICP was so prolific in the mid-90s. With the LPs, they are releasing an album or two every year. That's hustling.

This album starts with ICP driving and then getting into a car crash. After dying, they are confronted by people who want them to turn the crank to jack-in-the-box.

This song starts with a carnival barker barking about people getting something from a "riddle box" after they die. Then Violent J introduces himself. They call themselves Juggalos again. Violent J also says "the jokes on you". Shaggy then introduces himself to the listener and says they received their prize from the riddle box. The carnival barker says by turning the crank, the deceased will learn whether they go to heaven or hell. There is a continuous beat but no verses.

Following the beat is the actual song "The Show Must Go On", which is listed as Track 3, but is the second song. ICP is trying to confuse me.

This song drops right into Violent J's verse. And the clowns are back. Here he references the Joker Cards - "three more cards and the skies will be falling". Not sure what that means, but the cards are a theme for ICP. I dig the beat in this song. It has a dark, deep, funky sound. Following Violent J is of course Shaggy 2 Dope with a decent flow. A little better than his previous albums.

I like the narration in this song. It actually describes the ICP meaning. The clowns are part of the carnival, setting up the tents, etc.

This song starts with a prank call to stereotypical southerners and ends in a delivery person shooting the southerners. This song is a remix of the song Chicken Huntin' that was on the Ringmaster album, although this song has a rock riff, coming out in early phases of rap-rock. I still don't understand ICP's obsession with killing rednecks. Is this the clowns' vigilante mission? Or is this part of the carnival?

Following Chicken Huntin' is a track in which an interviewer tries to interview ICP to no success. This is not the next song. ICP trying to confuse me again.

Nice old school rap beat with a kid's type laugh track. And Shaggy 2 Dope goes into a horrorcore verse about a loner in a broken home who makes distorted toys. Each of the toys of course adds to the chaos and murder.

Begins with a track of two guys talking about how one guy is still in love with his dead girlfriend.

Violent J starts with a nice sounding verse about his visiting his dead girlfriend in the cemetery. Apparently clowns like necrophilia. Do the clowns exist by any moral code? If real people have to turn the crank, do the clowns exist in heaven or hell? Or are they limbo beings, able to do whatever they want with no repercussions? Does the Ringmaster and others also exist with no moral code?

Otherwise, this song is skippable.

A carnival barker greets "wealthy beings" to a circus of freaks and unfortunate souls. This is song was previously on Shaggy 2 Dope's solo album. It is a song about individuality that is looked down upon by mainstream society. It has a good message of acceptance in a twisted, horrorcore way.

I like the beat of this song. Funky. Violent J raps about finding a group of dead bodies dancing. Nice Kurt Cobain reference. Why is the clown surprised to find headless people? I do like the upbeat groove of this song. I bet this is a crowd favorite.

Wow. This beat is super nice. Very funky. Shaggy 2 Dope starts rapping about a gameshow and its contestants. Of course the contestants are people ICP dislikes and they get killed. I don't think this is part of the carnival. Or this could possibly be a creative Walter Mitty-type dream of someone who feels marginalized.

A newscast discusses missing dead bodies. The clowns like dead bodies. They have them everywhere. Is their deadbody girl their cemetery girl? And are the dead bodies those who turned the Riddle Box? Does this song have anything to do with the theme of the album?

This is not a good song. The tone of the song is an attempt at a twisted love song. ICP sing more than rap. I don't like the tempo and the beat. It is like a bad break in the album. Are the clowns on their day off from the carnival here?

We have returned to the carnival. Ol' Evil Eye is the main attraction movie at the carnival. This beat is fantastic - very similar to the Gravediggaz beats. Violent J raps about trying to kill a dude with a weird eye. Shaggy 2 Dope also tries to kill the old evil eye dude. As bad as the previous song was, this song is very cool. Probably one of the best in this whole ICP adventure.

Violent J starts with a depiction his sad life and neighborhood. Then he states when you die, you go to the killing fields. Is this a depiction of hell? Or this ICP's depiction of the inner city? ICP hasn't mentioned the inner city versus suburbs concept at all this album. The meaning of this song is confusing. Probably why it is the second to last song on the album.

This song concludes with Violent J celebrating going home to the ghetto. According to ICP, they want to go home to the freaks, gang bangers, and crooks in the inner city. This song brings back my confusion about ICP: are they celebrating the poor elements of the inner city? Do they want it to get better? If not, it sounds like they are exploiting those in poor socio-economic conditions for content of their song. It almost conservative in its celebration, like a country song about beat-up pick up trucks in a poor small town.

The album ends on two bad songs.
Posted by Jordi at 1:45 AM