Not So Serious Movie Review: Track of the Moon Beast (1976) 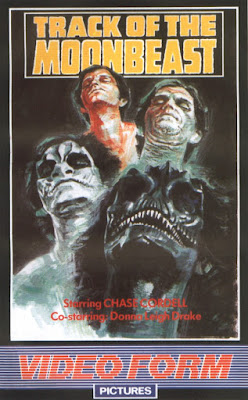 Tonight's cinematic misadventure was Track of the Moon Beast (1976), a low budget horror about a dude who gets a piece of moon rock stuck in his head and turns into a giant lizard. The movie stars no one of any significance, although somewhere someone is proud of their grandfather for being in this.

As mentioned, the movie is about a guy, a loner who lives his mom, who enjoys stalking around the desert. He meets this photographer lady who falls in love with him in a few hours. They go to a cliff to watch a meteor shower and a piece of moon rock lands on Earth. A shard of this moon rock lands in this guy's head. After a few days of headaches, he merges with his pet iguana and becomes a giant lizard man. Giant lizard man then torments the town before getting shot with an arrow by a Native American professor.

This movie is listed as one of the dumbest movies of all-time and rightfully so. The character development is weak, the monster is a guy in a rubber suit, and pretty much all the dialogue is awkward and stilted.