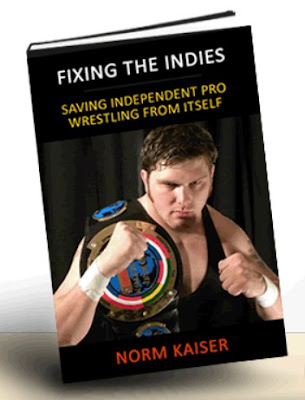 Throughout the last 15 years, I have gone to countless small professional wrestling shows. I have travelled to flea markets, gyms, small civic centers, and fairgrounds to support those trying to make a career in squared circle. While a lot of my travels were to support my brother who was working his way up the ranks, along the way I met some great people who put their bodies on the line in name of entertainment. From them, I learned a considerable amount about how the business of wrestling runs.

Years ago, I bought Norm Kaiser’s book “Fixing the Indies: Saving Independent Pro Wrestling from Itself”. I am not sure how I heard of it, but it has been sitting on my shelves for at least five years. One of my new year’s resolutions is to read some of my older books and not get distracted by new book purchases, so I figured Kaiser’s book would be a great curtain jerker for 2022.

(Curtain jerker – wrestling slang for the first match of the night.)

First and foremost, Fixing the Indies was written 10 years ago. Wrestling has changed a lot since, for better and for worse. Some of what Kaiser writes about are still problems with the business, from the top to the bottom. But some of his discussions makes him appear to be a crabby, old man who would be happy if pro wrestling promoters modelled their shows after MMA.

Let’s start with the positives: the book is well put together. It seems self-published and I cannot find any mention of Foxbat Books anywhere on the web. I noticed no typos in the text. I wish the photos were better aligned, but overall, the book is well done for a niche book.

In the book, the biggest positive is Kaiser’s emphasis on REALISM and COMBAT. He makes a lot of sense. Pro wrestling should never be mistaken for synchronized swimming. Unfortunately, pro wrestling shows are filled with “spot fests” – moves planned and performed with athleticism and crowd response in mind, not the acting of a true fight. Kaiser writes that pro wrestling should look like a fight, not a competition to see who can do the most flips, dives, or choreographed stunts. I think he is 100% correct.

Kaiser also gives good advice in regards to professionalism. Looking like a fighter is important. Matching colors are important. Being in shape is important. Having clean, if not, well-presented gear is important. Staying a character is important. I also like Kaiser’s advice that bad guys not mix it up with fans as it detracts from the bad guy’s prime focus of winning the match.

There is also good advice about merchandizing and promotions, but it is a mixed bag with negatives I will discuss shortly.

Possibly the best part of the book is Kaiser’s book is his breakdown of heels, the bad guys of pro wrestling. Kaiser talks about character a lot. Some I agree with – too many flip-flops, stop listening to internet wrestling “experts”. Some I don’t – he is very negative on gimmicks and the characters that have made wrestling fun. But his analysis on heels was great.

Kaiser breaks down heels into 12 types:

He analyzes what makes each type effective and attractive. He advises not to be all of the above as characters would then be too cartoonish and unbelievable. Heels should work within the constraints of normal human behavior. It is that commonality to the average asshole that makes them hated.

Now on to the negatives.

Number 1, first and foremost, is credibility. I have no idea who Norm Kaiser is. There is no bio, no picture, no quotes from established names, no blurbs and reviews, and very few stories from the road. That kills this book. Kaiser can have all the ideas he wants, but unless they have been proven to make money, they are just his opinion. While he has some good points, the only part of the book where he claims to have any knowledge beyond opinion is in the physical fitness portion in the back of the book. There are too many segments that start with “I have been to wrestling matches, and here is what they should do better”. Kaiser needs to prove his bona fides.

Second, Kaiser weighs down the book with way too much social conservativism. He likes a very conservative style of old school wrestling and doesn’t understand the allure of anything else. He doesn’t understand why wrestlers come out to that hippity hop and why anyone would wear anything but trunks to the ring. No makeup, no tattoos, no masks, no jeans, no bare feet, no flair, no individuality. Often times, his social commentary borders on insulting, which hurts his credibility.

Third, even for a 2010 book, there are way too many outdated references. It is clear Kaiser is a late boomer or early Gen-Xer. There are references to M*A*S*H, Dukes of Hazard, Charleston Heston, and other pop culture icons from the 1970s or earlier. Using outdated references is a great way to lose the reader.

Fourth, Kaiser rarely ever mentions women. His only use for women in a wrestling show is as “rainmakers” at merch tables. He suggests promoters find attractive girls with large breasts to work the tables, because that’s what wrestling fans like to see. In nearly 350 pages of wrestling commentary, Kaiser never once discusses female wrestling. Nor does he discuss female wrestling fans, often suggesting that the only people who buy wrestling tickets are male. I know the book is 10 years old, but even then, there were great women working the independent wrestling circuit as well as millions of female wrestling fans.

And if he wasn’t being sexist, Kaiser is also insulting. Especially to anyone he doesn’t understand. For example, he writes that “nerds are typically great photographers, web designers, and computer people” and understanding technology is what makes them “nerds”. He then instructs would-be promoters to find a nerd and get them to do things for the promotion for free. This is straight-up bullshit and reeks of high school jock arrogance. And that is just the insult that stood out the most. There are many others.

Overall, Fixing the Indies is like an independent wrestling show. There is some good content, some bad content, some cringy attempts at humor, and some outdated content that the promoter wants to shove in there because he likes it. For all it’s flaws, however, there are nuggets worth keeping and it is money well spent.

In conclusion, would I pay to see Kaiser’s promotion? Probably once or twice. More if I knew some of the performers.

Would it have personality? No.

Would it be tighter, cleaner, and more professional than 90% of independent wrestling shows? Yes.

Does Norm Kaiser need to get with the times, stop insulting people, include women, and better understand the audience of modern professional wrestling? Absolutely.

In the words of the ancient philosopher Joe Dirt, "It's not what you like. It's the consumer."