Books, Blues, and Baseball - A Weekend in Tallahassee

A big part of being an author is selling your book. Some authors don't like that part. I love it. As an extrovert, I enjoy meeting people, I enjoy telling them about my book, and I love it when I complete a sale.

Which honestly, is kinda weird as I have never worked in sales in my life and I have no desire to. Selling my book as a hobby is completely different from selling a product for a living. Maybe one day my book or books could be my living, but I am not expecting that at this point. This is just fun.

As mentioned in previous posts, my first book signing was scheduled at Midtown Reader in Tallahassee, Florida on February 19th, 2022. Going to Tallahassee was a homecoming for me, as it was in Tallahassee way back in 2001 that I published my first article, a piece on library security sensors for the FSView & Florida Flambeau.

Tallahassee is a four hour drive from my home in Tampa. Tampa is a growing metro area and Tallahassee has seen its share of growth in the last 20 years. But small towns along the state highway to the Florida state capital haven't changed in two decades, probably even longer than that. It's rural Florida, deeply conservative, and very old fashioned. Not much changes along these roads. The Dairy Queen is still where it is, the gas stations are still where they are, the 35 mile per hour speed trap still exists, and the town famous for banning Satan is still just as small. Travelling from Tampa to Tallahassee is like driving through a time tunnel, where progress stands still.

I arrived in Tallahassee on Friday afternoon, just in time to meet with a college student I have been helping with resume and career advice. I remember being a clueless college student, so any help I can give is help I didn't have. I might have had a more stable career with a little guidance, so hopefully I can help someone not face the same challenges I have faced. As well, college students keep me open to new ideas and perspectives. There are new thoughts that having a younger "mentor" is a good thing. They help me as much as I help them.

After a Friday evening dinner, I spent the night at a friend's house. I had to get a good night's sleep for my big day on Saturday.

After brunch with one of my old professors, I arrived at the bookstore near 2pm. The signing was scheduled for 2:30, but I wanted to get there early in case we needed to set up. We didn't do a reading, a Q&A, or any other audience participation. I was set up with a chair, a table, and several copies of my book.

People were already there waiting for me before I arrived. Parents of a longtime friend had come in his place as he currently lived out of town. They bought two copies of the book, one for him and one for themselves. Besides my friend's parents, my old professor joined me, as well as several other old friends, some of which I hadn't seen in nearly 15 years. There was a steady stream of guests saying hello and buying my book from the bookstore. I would say my first official bookstore event went very well. 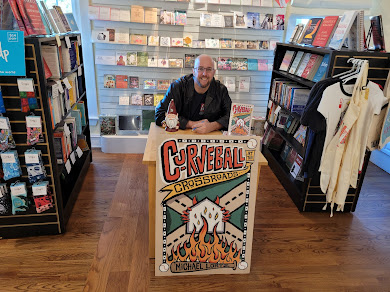 After the signing, my friend and I ventured a short ways out of Tallahassee to the Bradfordville Blues Club. The BBC is one of the best places in America to see live music. It is an old juke joint along an old dirt road where blues legends of yesterday, today, and tomorrow mingle. There is a long history to the Bradfordville Blues Club, and the love and respect the current owners have for the legacy is palpable.

What I did not know until recently was that a large grass field aside the Bradfordville Blues Club was once a baseball field. This discovery will be its own essay eventually, but whereas the BBC was an influence on Curveball at the Crossroads before, now Curveball at the Crossroads could almost be called a literary tribute to the Bradfordville Blues Club.

With this new knowledge in mind, my friend and I took several pics of my Curveball at the Crossroads poster around the Bradfordville Blues Club. The artwork for my book was done by prominent blues artist Mojohand, so naturally the art of the book fit with the vibe of the bar. We also took several pics of the book poster on the old baseball field. Curveball at the Crossroads was in its spiritual home.

Before I left, I signed a book for the club and gave it to the club manager so he could give it to the owner. It was the least I could do. 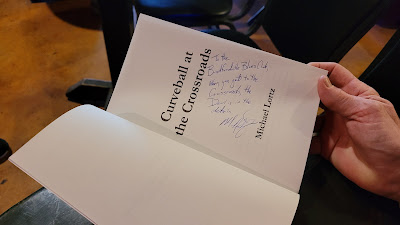 After my friend, his girlfriend, and I got dinner, I returned to the Bradfordville Blues Club for the night concert featuring Tampa blues guitarist Selwyn Birchwood. Selwyn has recently become one of my favorite new blues players. Not only is he local, but he is also becoming nationally recognized for his original songwriting and blues guitar prowess. With any luck, he could be the next Robert Cray or Gary Clark, Jr. Don't be surprised to see his name in bigger and bigger places.

As I pulled into the club parking lot, the parking attendant told me to pull to the right of the bar near the band's van. She told me that if I had books with me, they would be cool with setting me up with a table to sell books during the show. I was flabbergasted. Earlier in the week, I messaged the club asking if I could sell books there, but didn't get a response. But they had gotten it and wanted Curveball at the Crossroads there.

Not only did Selwyn put on yet another great show, but I made money before, during. and after the show. I had a table six feet from the stage, right in front of the 200 or so people in the audience. And before the show, the owner of the Bradfordville Blues Club introduced me and my book to the crowd. Within minutes, people started coming up, talking to me, and buying books.

To sell my book at my favorite blues club was an unbelievable experience.

Following a phenomenal Saturday night, I kept the blues and baseball vibe alive Sunday by attending a Florida State University baseball game. The weather was perfect, the field was pristine, and the sound of the ball pinging off the bat filled the air. There is no better daytime activity on an early spring day in North Florida than watching baseball. Of course, it always helps that the Seminoles won.

When the game was over, I drove to my friend's house, joined them for dinner, said farewell, and embarked on my return journey to Tampa. It was a perfect weekend of books, blues, and baseball. 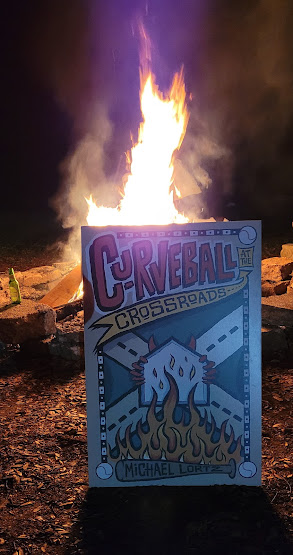