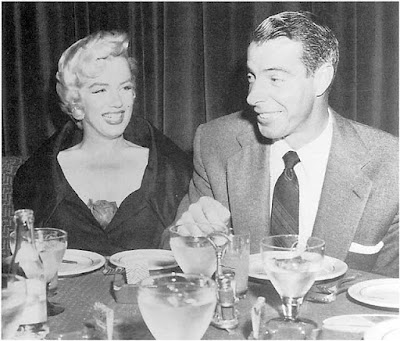 This past Saturday marked the 45th anniversary of the assassination of President John F. Kennedy. According to scholars, historians, politicians, The Government, and the History Channel, Kennedy was gunned down by Lee Harvey Oswald, a mysterious goon who was both an ex-Marine and a Communist. These powers that be claim Oswald acted alone, entirely driven by his own delusions of grandeur. Or so the story goes.

Of course, you could believe the conspiracists. The ones who believe Oswald was set up. They believe it could have been any one of the following:

- The Cubans
- The Russians
- The CIA (check out this wild link!)
- The FBI
- The Mob
- Vice President Lyndon B. Johnson
- The Israelis
- The Illuminati
- Tonya Harding

But the one person who seems to get off pretty easy on the conspiracy front is the Yankee Clipper himself, Joe DiMaggio. No one seems to question his lack of involvement. Consider this:

Joe DiMaggio married Marilyn Monroe in 1954. Despite being divorced only nine months later, for years DiMaggio continuously put flowers on her grave. He had an undying commitment to her. Monroe, who died of an overdose in 1962, supposedly had affairs with both John Kennedy and Robert Kennedy. According to this article, DiMaggio truly believed the Kennedys killed Monroe to end some of her verbal transgressions. What Monroe said or learned from the Kennedys is up to dispute, but according to rumor, she told Frank Sinatra about some of the CIA's dealings in Cuba and their actions against organized crime. Her loose lips may have spelt the end for her.

So here is what I believed happened:

For whatever reason, the Kennedys, possibly through the FBI, had their hand in the death of Marilyn Monroe. After her death, DiMaggio immediately accused the Kennedys and plotted his revenge. Knowing he couldn't possibly get even with John Kennedy by himself, DiMaggio talked to Sinatra and his entourage of seedy elements and garnered their support. Of course, being the most famous Italian in New York for nearly a decade, DiMaggio had to have ins with some of the more powerful families in New York.

So after a year and half of plotting and planning, DiMaggio decided to have Kennedy killed in Dallas in November, 1963. For DiMaggio, Dallas was the perfect spot. It was far away enough from New York or DiMaggio's home city of San Francisco to cause heat. All DiMaggio needed was a patsy, someone to take the shot.

According to court records, Oswald spent a short time during his childhood living in Texas, where he was the captain of his local baseball team. Shortly thereafter, he moved to New York City to live with his half-brother. During this time, DiMaggio was wrapping up his legendary career. If Oswald kept the passion for baseball, whose to say he didn't ever attend a Yankee game and grow to admire the great Joe D?

Fast-forward to 1963. DiMaggio, with his mind set on revenging Monroe's death, learned about an impressionable young ex-Marine who has travelled the world supporting Marxism and the Cuban Revolution. DiMaggio ordered one of "his guys" to talk to Oswald, convincing him that the murder of the President would not only be good for the world, but also would ease the pain of his former baseball idol. As needy as he was for admiration, acceptance, and attention, Oswald would have been an easy sell. He had the tools, the how-know, and now the incentive. The rest, as they say, is history.

Oh, and in case you are curious as to why DiMaggio was never really considered a suspect in Kennedy's death, just imagine the fear a few visits by New York's most friendliest families would have had on the members of the Warren Commission. There was no way the Yankee Clipper was even going to be questioned, capiche?
Posted by Jordi at 5:47 PM

This is the most asinine conspiracy I have ever seen presented. Even Oliver Stone would be like, "Whoa, Jordi, hold up. Isn't this just a tad on the outlandish side?"

And yet, in the two years we have known each other as Blogging Buddies, a trust has been formed. If we can't trust our fellow faceless and nameless Internet friends, who can we trust?

I believe in your theory and fear for your safety.

My advice to you: get out of town quickly, before the CIA and The DiMaggio Family find out what you know...if they don't already. If that is the case, um, Jordi Scrubbings? I don't know anybody named Jordi Scrubbings.

No, officer, I don't know any Jordi Scrubbings (slapped upside the head) I mean, here's his e-mail address!

Actually, Jordi, this does make a warped bit of sense, and that's better than 90% of all Kennedy assassination theories. Good work!

Marvin Kittman met a Marine who fired the weapon at a range, whose results were left out of the Warren Commission report, who claimed he had to have been aiming at JBK, Jacqueline Bouvier Kennedy, from the target placements. Kittman was a syndicated TV critic (saving television in his column "The Marvin Kittman Show") who as I recall, published that story and seemed to be no longer in the newspaper, Newsday. He writes at the Huffington Post sometimes I see. Maybe he just retired.

"When you've loved and lost like Frank has, that's when you really know what life's about."

My friend's Dad used to get drunk and go on this "DiMaggio Killed JFK" rant all the time. This is old news, buddy.

Greg -
Not saying I made it up. Not at all. But if you google it, you only get one page, and it lacks the ironclad evidence I present.

Perhaps google is part of the cover-up?

As for your friends' dad, all I can say is the drunken tongue speaks the honest truth.

If you look carefully at the Zapruder film, there is a man, in a New York Yankee No. 5 jersey, crouched on the grassy knoll, taking aim at the motorcade, with a high powered rifle. Babe Ruth channelled this information to me during the Watergate hearings.